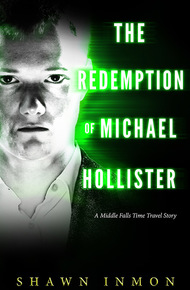 Shawn Inmon is a full-time writer who writes speculative fiction and fantasy. He published his first book, a memoir about life in small town America in the 1970s, in 2012. He thought it would be the only book he would ever write. Ten years and thirty-two books later, he was proven to be wrong again, as he so often is.

His sixteen book Middle Falls Time Travel series addresses the question of What would you do if you could do it all again? Protagonists in that series die and wake up at an earlier point in their lives. They often find that knowing what is coming does not help as much as you might think. His Alex Hawk Time Travel series poses the question of whether a modern man could survive in a distant future that closely resembles our ancient past. His Kradak the Champion series mixes humor and fantasy to form an adventure series that never takes itself too seriously.

The Redemption of Michael Hollister by Shawn Inmon

All Michael Hollister wanted was death. What he got was time travel.

Convicted of murder, and with nothing left to live for, Michael commits suicide in his jail cell in 1977, then opens his eyes in 1966, in his eight-year-old body, with all memories of his previous life intact.

His first thoughts are of the dark intentions of his father. When the man who raised him once again tries to do the unthinkable, Michael has a chance to right his childhood's greatest wrong. But, can he do that without becoming a killer all over again?

The combination of a serial killer with groundhog's day makes for a riveting character study. – Daniel Potter

Finally, I can kill myself.

Michael Hollister pushed his face against the bars of his cell. He was alone for a moment, a brief reprieve in what had become his personal hell. Beatings. Rape in its many varieties. An endless cycle of horror and ignominy. He wasn't strong enough to fight off even a single hardened thug, much less a pack of them. The inmates of C Block found such a fresh young prisoner an unusual treat.

Michael removed the sheet from his bed and twisted it. If I mess this up, they'll put me on suicide watch. That'll make this just that much harder.

Now that the moment had arrived, with the jury-rigged noose actually in his hands, he didn't stop to consider whether he really wanted to end his life. It was all he had thought about since he'd arrived in the Oregon State Penitentiary.

There is no Hell an angry God can create that will be any worse than this life.

Happy thoughts of ending it all and escaping the humiliation and pain had allowed him to survive with his mind intact. Now was his chance. He twisted the other end of the sheet tight and fixed it around the top post of the bunk. He had to make do—and to make haste.

He tied the other end around his throat, paused for just a moment, remembered the feeling of his hands around Carrie Copeland's neck, and smiled for the last time. He jumped slightly and let himself fall, a dead weight. He hoped to break his neck.

He did not. The sheet tightened and choked him. Michael's eyes bulged, his face turned first red, then a deep purple. His bare feet beat an involuntary staccato tattoo against the concrete floor. His arms never left his sides. His last thought before consciousness deserted him was, "Will this never end?"

The room was dark and cast mostly in shadow, but he recognized it even so—his childhood bedroom. He held his hand in front of his face. His long, thin fingers were gone, replaced by short, chubby ones. He touched his neck. No sign of strangulation. He tried to get out of bed, but fell face-first to the floor. It was much farther down than he had anticipated. His bed seemed enormous.

He crept down the hall to the bathroom, closing the door behind him. He flicked on the light and blinked back the brightness. When his vision cleared, he gazed into the bathroom mirror.

Michael looked into his own childish face.

His legs went weak and he sat down with a thump on the toilet seat.

Holy shit. How the hell did this happen? He got to his feet and looked, fascinated, in the mirror. He raised his eyebrows, watching his boyish image do the same. He closed his eyes, shook his head violently from side to side. When he opened them, it was all unchanged.

He opened the bathroom door and walked, automatically, through the house and back to his bedroom. His family had lived in the same house since he was born, so, aside from a few cosmetic changes, this house was the same as the one he had been living in until his arrest for murder, just before his high school graduation.

He climbed back onto the bed.

I killed myself. That should have been the end of it. Instead, I woke up here. So. There is something other than devils with pitchforks or the long dirt nap on the other side. Interesting. And now, here I am, in the body of a child. It's a clean start. No prison, no murder. I can do anything I want.

Outside, a breeze kicked up. The house creaked. Michael froze, eyes on the dim slit of light at the bottom of his door. His heart pounded.

Again, Michael slipped out of bed and crept through the house. He went downstairs to the kitchen and pulled a carving knife with a bone handle out of the block on the counter.

Back in bed, he slipped it under his pillow.

Michael lay back against his pillow, thinking furiously.

Time to get some answers.

He pulled the knife from beneath the pillow and got out of bed, less awkwardly this time.

Already getting used to this shitty little body.

He walked silently down the thick carpet runner that ran the length of the hall. He opened the door to his parents' room and peered into the semi-darkness. Two forms in the bed—his parents, Clayton and Margaret Hollister. Michael's lips pulled back in disgust.

His father blinked once, twice, then focused on Michael.

He's younger, too. Of course.

"What the hell? Michael, what are you doing? Get back to bed."

In one smooth motion, Michael pulled the knife from behind his back and jammed it into his father's throat.

Blood spurted against the hand-tufted chenille bedspread and spattered onto his father's blue and gray striped pajamas.

Michael pulled the knife back, giving it as much of a twist on the way out as he could muster. The handle was slippery with blood, and his hands were not strong.

Clayton Hollister's hands flew to his throat, but trying to stanch the spurting blood was like trying to hold back the tide.

Margaret Hollister awoke, groggily lifted her sleep mask, and saw an Alfred Hitchcock movie come to life in her own bedroom. She screamed, loud, shrill, and long.

"Oh, now you have something to say, Mother? Where were you when I needed you?" His words went unheard in the reverberating screams that filled the room.

The Hollister bedroom, decorated in muted golds and taupe, was now splashed by crimson, arcing across the bed, the table, the floor. Clayton, gurgling, finally slumped back against the headboard, his eyes unfocused. His hands fell limply into his lap.

Michael nodded, satisfied. He wiped the bloody handle of the knife on his own pajamas. He closed his parents' door, muffling his mother's screams.

That was fun. But, now what? They would never convict a small child of murder, but there will be long years of doctors, therapy, drugs, treatment, people probing me. I don't think I can handle that. Still, the end is not the end. There is something after life. What if I kill myself again? Will I come back here? Somewhere else in my life? I'd rather not be a small child like this, if I don't have to be. There's only one way to find out.

He tossed the knife onto his bed and clambered up after it. He looked around at his childhood room. A picture of Winnie the Pooh and Piglet hung above his dresser. A toy box with a firetruck and a Slinky poking out of the top sat in one corner. His bed, dresser, and night table were a matched set.

Not a bad room. Would have been a good life, I suppose, if not for him.

Michael buttressed the knife against the mattress, pointed at his chest at a 45-degree angle. Before he had a chance to reconsider and change his mind, he drove himself forward onto the tip of the knife.

Michael Hollister screamed, but only for a moment.