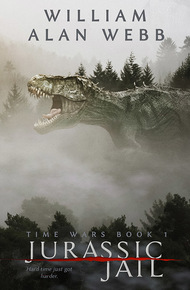 Bill grew up in West Tennessee, riding his bike on narrow rural roads lined with wild blackberry bushes, in the days before urban sprawl. He spent those long rides dreaming of new worlds of adventure. Childhood for him was one interesting activity after another, from front yard football to naval miniatures, but from the very beginning reading was the central pillar of his life.

Still living in West Tennessee with his wife of 42 years and 8 dogs, four of which are Search and Rescue certified police dogs, life has turned out better than he could ever have dreamed. Yet Bill never forgets that it is you, his readers, who make this possible. There is a covenant between writer and reader that is always uppermost in his mind. Readers who spend their time and money to read an author's works, deserve the best that author has to offer, and he never forgets that.

Bill is proud to be a member of the International Authors of Science Fiction Authors, the Science Fiction Writers of America, the Society For Military History and the Alliance of Independent Authors. To keep up with the latest news, including new releases, join the mailing list at his website, www.thelastbrigade.com.

In the Jurassic, nobody cares if you scream.

Future America is dangerous and bankrupt. The interstate highways are littered with the rusted hulks of ambushed cars and trucks, and only Mad Max would dare travel the back roads.

When an arms race with Russia and China to develop time travel for military purposes achieves success, the body count skyrockets as both patriot and enemy try to hijack the new technology. Like the Manhattan Project and Operation Overtime before it, such a project attracts the best and the brightest as well as the worst and the psychotic.

But not everyone has given up on the rule of law. In Tennessee, Fayette County D.A. Pete Dance wants to prosecute the murder of a man whose fossilized remains turn up after a series of devastating earthquakes. The problem is that the victim is still alive.

When the violence starts, it doesn't stop until the final whirlwind of teeth and claws and lasers.

Bill Webb has a talent for writing fast paced, exciting thrillers built around interesting science fiction concepts. Jurassic Jail bounces between the far past and a post-cataclysm future and has a dandy of an ending that'll leave your head spinning. – Alec Hutson

Near the southern coast of Laurentia

Allosaurus bent down and sniffed the skeleton lying in the field. Bony plates lined the dead animal's spine and the rib cage shone white in the noonday sun, but the giant predator didn't care about that. He wanted to know if edible meat still clung to the remains.

The scent triggered a memory in his primitive brain and Allosaurus knew, by instinct, this had been his kill. After stripping the carcass of nutrient-rich organs and flesh, he had left the remainder for the scavengers. Now he had come back through this part of his territory looking for another meal, but prey animals had fled for safer places and hunting was poor. Navigating by scent markers left weeks before, he moved west in search of food.

The predator's mind registered the landscape as shapes to be trampled or avoided. The verdant green colors meant nothing; only food mattered, and Allosaurus didn't eat plants. He was a full-grown carnosaur and ate only meat, lots and lots of meat, but whether torn from a still-living victim or a rotting corpse, Allosaurus didn't care.

Each step of his two-ton body shook the ground and water squished over his claws as he left tracks in the soggy soil. Then he paused and lifted his snout at a whiff of what his brain knew to be food. He hurried on now, not because the evergreen trees ahead had been trampled and smashed, or because he followed the trail of huge footprints, but because instinct and smell drove him forward. Somewhere down that path was what his simple brain knew to be a four-legged animal with a long neck, the kind of meal he could eat for weeks. Anything in the giant killer's way scrambled to hide, but Allosaurus wasn't interested in tiny animals; he wanted a full belly. Mile after mile he stalked through the forests and swamps, over the hills and across the clearings.

Eventually he would find prey, because he always did. And then he would feast.