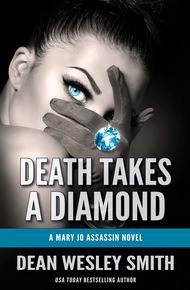 When a contract comes in on another assassin, Mary Jo must discover why. Assassins don't kill assassins.

With four ancient-order assassins working together, anything becomes possible.

Sex, murder, and diamonds. And pretty much in that order.

Only Mary Jo Assassin can deliver all three with a smile and a vodka orange juice drink in her hand.

Bestselling writer Dean Wesley Smith (that's me) fits right here with these first four. I have written around two hundred novels, comics, and more short stories than I can count. Death Takes a Diamond is a Mary Jo Assassin novel where immortal assassins take down a massive diamond smuggling ring. – Dean Wesley Smith

Mary Jo usually loved mornings. The fresh promise of a new day at hand, the savory taste of freshly brewed coffee, the smell of eggs and ham.

This morning wasn't that much different from her normal mornings. She went through her daily ritual of showering and getting dressed. Jean, Mary Jo's partner, lover, and roommate, didn't much go for mornings, so she normally slept in and it wasn't until hours later that Jean usually crawled out of bed.

But this morning, because Mary Jo was at a critical point on a job, Jean got up and cooked her breakfast. They had learned that working together was so much more fun than working alone, so they shared everything, and Mary Jo was glad they did.

There was something about this job Mary Jo had been hired to do that bothered both her and Jean and neither of them could put their finger on the problem.

Today they would find out what exactly was happening.

Mary Jo came out of the New York City penthouse apartment's main bathroom and into the modern kitchen where the sound of ham sizzling greeted her along with the thick, rich smell of freshly brewed coffee.

She had just entered heaven.

Early morning sun streaming in the large windows near the dining nook made it even nicer as below them the wonderful city started to wake up.

Mary Jo loved how Jean normally looked in the mornings, her blond hair pulled back, her perfect body tucked into a thin cotton robe. But this morning Jean had gotten dressed in Levi's and a silk blouse and tennis shoes, her working clothes. She had actually gotten up ahead of Mary Jo, which in their two years together had almost never happened.

Mary Jo thought Jean the most beautiful woman Mary Jo had ever seen. Jean said the same about Mary Jo. There was no doubt they were a striking couple from all the looks they got when they went out in public.

That was her idea of the ideal way to work.

She loved high quality vodka and fresh-squeezed orange juice. That simple drink would lift anyone's mood. And it certainly did hers most every night.

Luckily, Jean loved the drink as much as Mary Jo did.

She and Jean were professional assassins, and both had done that job for over a thousand years, but as best they could figure, Mary Jo was about a hundred years older than Jean.

Neither one of them could imagine doing anything else but being an assassin.

But this last job Mary Jo had been hired to do just bothered them both, and over the centuries they had learned to listen carefully to that gut sense that something was wrong.

They both thought they knew.

Today, they were going to find out what was bothering them exactly.

Mary Jo hugged Jean from behind as Jean stood at the stove, then went and poured herself a cup of coffee.

Jean already had one for herself on the kitchen table that looked out over a garden area on the roof and the city beyond.

Mary Jo sat and took a sip of the wonderful flavor, then watched Jean move as she cooked. By the way she was moving, it was clear to Mary Jo that Jean was a little worried about the job today.

The job, on the surface, had appeared simple.

Mary Jo had been hired through normal channels by a man named J.T. Sones. He went by Tate, a multi-millionaire head of an information conglomerate that had a good fifty companies under its umbrella.

Mary Jo had received the standard one million up front and would get two million on completion. The job was to kill a woman by the name of Bonnie Malak.

But after two months of looking, Mary Jo could see no connection between Malak and Sones. No business, no past love affair, nothing.

The two had never crossed paths as far as Mary Jo and Jean could tell.

What bothered Mary Jo most was that Bonnie Malak looked like an assassin herself. Short, in shape, clearly in no need of money, living alone just off Broadway in a penthouse apartment. She moved like an assassin and seemed to have few friends and no enemies, the perfect way an assassin lived.

She also seemed to have a history under the Malak name that felt a little too perfect in places.

Tate Sones, on the other hand, had made many enemies over the years. He stood six-foot-one, had the body of a thirty-year-old, even though he was fifty, clearly colored his hair, and clearly exercised. And he acted like a jerk to most people. There were a lot of reasons to want Sones dead, but no reason to want Malak dead.

And that bothered both Mary Jo and Jean.

When they had told a third assassin friend of theirs, Susan, she had thought the same thing. Susan lived about eight blocks away and the three of them had worked a number of jobs together.

They trusted each other.

Susan was going to help today as well.

So today they would all find out exactly what was happening. And why. Mary Jo had no problem killing anyone. It was what she had done for more than a thousand years.

But she had always tried to make sure she killed the right person.

Bonnie Malak did not seem to be the right person.