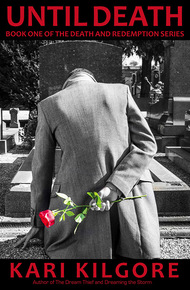 Until Death - Death and Redemption Book 1 by Kari Kilgore

Leo Sabov never imagined a day without his beloved wife Maria. Now he faces the rest of his life alone.

After bringing Maria to rest in her native Transylvania, Leo only wants to escape the rumors and superstitions taking over the tiny mountain village.

A former Communist Party boss, a string of unexplainable deaths, and an ancient mama dog force him into mysteries he can't understand or explain.

Will Leo survive a test even greater than the heartbreaking death of his wife, one with life or death consequences?

But I needed to round everything off. So to go with Robert Jeschonek's crazy Bloodliner novel of vampires, I added in Kari Kilgore's wonderful and very strange Until Death, which was on the preliminary ballot for the Stoker Award and a finalist for the Golden Stake Award. Until Death takes us deep into the history of Transylvania, in a way not done before. And Kari also fits right into this mix because she too writes across many genres and is very prolific. – Dean Wesley Smith

The villagers never paid attention to the dogs anymore.

The constant barking and scrabbling was background noise after years of so many strays learning to survive past their pampered origins. The rich, forested mountains in Transylvania were kinder than the crowded streets of Bucharest, under Communism or decades later. Creatures meant to warm laps and comfort hands have no easy transition to wandering, endlessly searching for shelter.

Some whisper of instinct surely must remain, even with every appearance of wild ancestors bred out of them decades before.

Leo Sabov wondered at that every time he was in Romania, how such a huge population could go unnoticed in the city or in the country. People could get so worked up over stray animals in the US, yet somehow the nomadic animals here seemed healthier and more content with less attention.

He sipped strong coffee on his third floor balcony, watching the first rays of sunlight trace orange fire on the sharp granite cliffs above the tree line across from him. His bare feet were pleasantly chilled by the tile, his mind soothed by his first good night of sleep in many weeks. Staying up too late and drinking too much with his little brother usually had the opposite effect.

A young girl walked through the chicken coop below, gathering eggs for the guests of the inn he'd been returning to with his wife for over twenty years. The milling birds stirred up a scent of rich earth strong enough to overcome even the coffee. The girl sang to herself, a sweet song at odds with the quarreling chickens and agitated dogs. Maria would have known the words to the song, would have whispered them into Leo's ear.

He rubbed his eyes, struck by a different sound in one of the dog's voices. His mind seized on the escape from memory. An old female with the dangling teats of many pregnancies stood in the neat yard beside the inn. She stared at something Leo couldn't see behind the rough-hewn logs of the outdoor kitchen. Her black and tan coat was healthy, and she was normally friendly, one of the sweetest in the village. This morning, though, her voice had a harsh, desperate edge.

Dogs began to gather around her, from neighboring houses and inns, from their rough shelters on the hillsides. Some looked around, searching for what was bothering her so, then resumed their normal morning discussions and investigations. The others, many of them clearly her offspring with that same rangy body and distinctive coloring, watched her silently at first. Then their voices began to take on that same worried note.

The old mother dog took a few stiff-legged steps forward, more than a dozen of her young following. Her sharp, fast barks were interrupted by low growls. Even from three floors up, Leo could see her long hair rise into hackles from her neck to the base of her tail. She walked forward again, her group in near lockstep beside her.

The shadows in the yard were deep with the sun barely over the towering, fir-covered mountain behind Leo. That had to explain the odd shape moving from behind the log and stone building below.

The inky phantom shifted, seeming to change as it moved, every sight more unsettling than the last.

A puddle of water, a deeper shadow, a slithering snake; a terrified cat, a deformed child, a staggering bear.

Leo leaned forward, drawing breath to call out to the girl walking across the dark green grass, egg basket in the crook of one arm. Whatever that thing was, his guts twisted at the thought of it being so close to her.

Before he could open his mouth, a pathetic, mange-covered dog stepped out into the sunlight beyond the kitchen. Her light brown coat missing in patches, her body desperately thin.

The group of dogs moved forward again, all of them joining with the ancient female this time, their barking fast as a machine gun. The poor stray picked up speed. She glanced at the inn, seeming to stare right into Leo's eyes, before she broke into a run toward the outskirts of the village.

Too many of the villagers had forgotten the dogs, forgotten their ancient pact to trade shelter and affection for far superior senses. The dogs remembered.