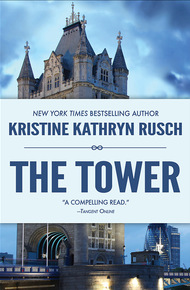 The Tower by Kristine Kathryn Rusch

So many mysteries in the past. So many opportunities as well. As Portals, Inc. uses historians to test its time travel devices, historians use Portals to test their theories.

Neyla believes the 17th century discovery of the dead Princes near the Bloody Tower will tell her who murdered the boys centuries before.

Thomas Ayliffe believes he can pull off the crime of the century—any century.

All three agendas collide in a story about crimes and criminals, past, present, and future.

Next, I added New York Times bestselling writer Kristine Kathryn Rusch to this all-star bundle. She also has written hundreds of novels, comics, and short stories, but is more known for her award-winning science fiction and her award-winning mystery under her Kris Nelscott name. I talked her into giving the bundle The Tower, a fast-paced time travel short novel of an attempt to steal the Crown Jewels. – Dean Wesley Smith

He had gotten a message.

Sent by old-fashioned tradecraft dating from the days of the Secret Intelligence Service, long before the advent of MI6. A simple flowerpot on a balcony in Kensington, a tiny red flag next to the ugliest flower Thomas had ever seen.

The flower didn't matter. The flag did.

It meant: Be at the designated spot, midnight. Be prepared.

So Thomas stood on London Bridge, his back to the traffic, his arms resting on the railing. To his left, the lights of Southwark Cathedral. To his right, the Monument designed by Sir Christopher Wren to remind everyone of the Great Fire of London in 1666.

Thomas pretended to contemplate the lights of London reflected on the water. A bit of a wind brushed his cheeks, bringing the slightly bitter scent of the Thames.

Behind him, cars hummed as they glided by. Someone would notice him sooner or later. A man standing on London Bridge at midnight, his arms resting on the edge, looking down at the water, spoke of melancholy at the very least, a potential suicide at the very worst.

His hair ruffled as the breeze grew stronger.

Then he felt someone at his shoulder and he braced himself so that he couldn't be tossed over. His heart was pounding.

Paranoia, that's all it was. He was here to do a job, not to be killed.

Still, he stepped slightly to his left, just enough to take him out of harm's way.

Thomas looked at her out of the corner of his eye. She was slight, hair cropped short, rounded cheeks reddened from the chill breeze. Maybe thirty, maybe younger.

"I've seen better." He spoke the coded response, half expecting her to go off script. After all, it was a lovely night, and strangers occasionally said such things to each other, even at midnight on London Bridge.

"I saw better on New Year's," she said. "The way the fireworks seemed to float through the Eye."

She was his contact then. Somehow he had always imagined the insider was a man. Middle-aged, disgruntled. Willing to be bought off. Thomas had been watching all of them—those that he could, anyway—wondering who would meet him when the time came.

Odd that he missed a woman. Maybe that's why he had. She seemed shadowy, inconspicuous, perfect for this kind of corporate espionage.

"These days," he said, "fireworks remind me of Guy Fawkes Day when I was a boy."

"Shame they can't blow up Parliament today." She turned toward him and grinned.

He didn't grin back, but he did check, out of the corner of his eye, to see if anyone approached. Aside from the cars humming behind them, the Bridge was empty.

"It's your only hope," she said. "They don't like doing remotes. You're lucky. The researcher is highly regarded, but female. She doesn't dare walk across the Thames. She has to be on location."

"You've also made your impatience known," she said. "If you want to finish your job in the next year, you'll take 1674. It's the only remote planned."

"They're not doing other remotes?" He certainly wouldn't hear of them. He did work at Portals, just like this woman did, but he had never been assigned to the technical areas. The managers had actually given tests to all applicants, and he had failed the mathematical portions. But he had aced the history sections. So he'd spent the past two years in research, finding out tiny things for major historians, and growing more and more impatient.

"They're afraid of remotes. They've only done one, and it was controlled. This is the first uncontrolled remote, and some think it too dangerous."

"Into a site where they don't know each and every detail. They don't even have the government's permission." She was staring at the Thames.

He did too, watching the lights ripple on the inky black water. He could get caught on this end, then, not by Portales, but by the British government. But there were no laws against time travel. Not yet.

"You have to be careful," she said as if reading his thoughts. "This is the first such major experiment. Try not to cock it up."

Cock it up. As if he were part of the corporate team. He didn't care if they never had another remote, so long as he got his treasure.

But he wasn't sure how he would go about it, even with this remote. "What happened in July of 1674?"

The woman didn't answer. Instead, she stared at the Thames for a moment. Then she said, "You're the fake historian. You figure it out. And, by the way, your portal is Neyla Kendrick. Good luck."

His portal. A pun. He hated puns, and was about to tell her when he realized she was walking away from him. The breeze carried her vanilla perfume long after her footsteps faded.

He had been told his contact would arrange the right time period, and make sure he could do his job with a minimum of fuss. Everything would be timed to the second.

Not that he lacked balls. He'd carried out some of the greatest thefts in living memory.

But this one would be the pinnacle of his career—not just in money, but in audacity.

Not all of them of course. The most famous ones as well as the ones still in use had to remain. But the minor ones, the ones he'd researched, the ones no one had done much more than stare at under glass for hundreds of years, he could take any one of those, and would.

If he decided to do this.

He thought he'd covered all the possible opportunities to steal the jewels in the 17th century.

What had he missed?