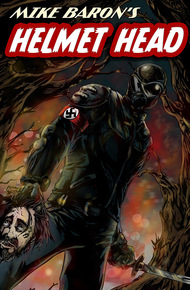 Mike Baron is the creator of Nexus (with artist Steve Rude) and Badger two of the longest lasting independent superhero comics. Nexus is about a cosmic avenger 500 years in the future. Badger, about a multiple personality one of whom is a costumed crime fighter. For comics, Baron has written The Punisher, Flash, Deadman, Star Wars, and many other titles. He has won two Eisners and an Inkpot award.

Baron has published fifteen novels including Banshees (a Satanic rock band that returns from the dead), Helmet Head (Nazi biker zombies), Whack Job (spontaneous human combustion), Skorpio (a ghost who only appears under a blazing sun), his Biker series (a reformed biker hoodlum turned private investigator), and Florida Man (which is exactly what you think it is).

Helmet Head was just a rumor to the rough and dangerous "one-percenters"—a monstrous motorcyclist dressed in black who rode the back roads of Little Egypt cutting off the heads of other bikers with a samurai sword. But on one terrible stormy night, Deputy Pete Fagan discovers that Helmet Head is all too real—and consumed with a fury that won't be satisfied until his demonic sword drinks its fill.

Mike Baron, the creator of Nexus and Badger comics, among many other things and a lot of novels, gives the bundle Helmet Head, a fast-paced and crazed novel of Nazi biker zombies. Yup, I said that. Got to read it to believe it. – Dean Wesley Smith

Larry "Red Rocket" Rodell was four hours out of Elgin with two ounces of meth in his ditty bag and one-and-a-half grams in his blood when he topped a gentle rise in Southern Illinois, saw the lushly wooded hillsides undulating into the distance and thought, Fuck me, I'd better get off this bike, drain my lizard and do a bump if I'm going to make the roadhouse tonight.

He felt the heat from his 113 inch S&S motor in his thighs. He felt every jolt in the old cracked asphalt from his hardtail frame. He was inured to the shriek of the bike and the roar of the wind, but Larry wasn't getting any younger. At 39 he was a full-time outlaw. He could always get a job sober and would always lose it when he showed up drunk or stoned.

Well fuck that shit. Larry was a Road Dog and the Dogs took care of their own. You could make a decent living as an outlaw. As Dylan said, you had to be honest to live outside the law. The ounces were for the club. Wild Bill promised Larry that there would be five keys coming in tonight or tomorrow, most of which Larry would take back to the Greater Chicagoland Area for distribution. Such was the economics of drugs that flowed up and down the Mississippi like the water itself. You could shoot it, you could snort it, you could stick it up your ass. And you could sell it. Larry thought meth should replace the dollar. The country would be better off on the Meth Standard. Meth was something Americans produced with pride.

Not paying attention, Larry took a gully-whumper that cracked a shock up his spine and rattled his skull. Whoa dude! Time to get off the hawg! He zipped through a hollow where the trees came right up to the side of the road. The air smelled of honeysuckle and just a tinge of pig shit, which put Larry in a nostalgic mood. He motored up a gentle hill to a plateau and there was a turnoff leading into a cornfield, two sturdy gate posts with the barbed wire pulled aside. It would have to do. He squeezed on Marilyn's brakes and the big bike slowed, front disc shrieking like a bitch in heat. He rolled Marilyn carefully off the scabbed asphalt onto the hard-packed earth, reached behind for a coffee can lid which he tossed in the dirt. He wanged out the kickstand and let Marilyn lean.

As always, he touched his fingers to his lips, then to Marilyn's, painted on the tank.

Larry semaphored his long right leg off the bike and stretched backwards, squinting into the afternoon sun. He was six four, weighed 170 with a narrow skull and the parchment skin of a heavy smoker and tweaker. His arms were so inked they were blue. His long brown ponytail fell back from his black skull bandanna. He wore Gargoyle shades. He wore a filthy gray T-shirt, now in its fourth day and over that a black leather vest bearing the Road Dogs' colors, a snarling pit bull. Over the pit bull it read in Gothic script "Road Dogs." Beneath it said, "It Ain't the Size."

Larry's heart went boom boom boom. He looked around. It was a beautiful sunny day in Southern Illinois, not too hot, not a cloud in the sky, birds chirping, the fragrance of summer on the breeze. Larry didn't see all that. Pollen made his eyes itch. He walked among the waist-high corn, unzipped his pants and pissed like a horse on a flat rock. His head felt like a cement mixer. He'd been taking a pounding all day. All his life. His back felt tight as a hurricane fence and his fingers were numb. He flexed them and swung his arms trying to bring some sensation back.

Temples throbbing, Larry returned to his hawg and removed a much-creased state map from one of the leather side bags. The Dogs were waiting at the Kongo Klub a couple miles outside Ptolemy. He'd made the run but this was a new route. The map looked like somebody threw a plate of spaghetti on the ground; there were so many winding, intertwining back roads. Where the fuck was he? Larry hadn't looked at a road sign in an hour but he had to be close. He could feel it.

He reached in his vest and removed a folded paper bindle filled with white powder. He looked around. Not much in the way of furnishings, so he shook it out right on his gas tank and used a stolen credit card to line up the bump. Not on Marilyn's face, of course. He fished a crushed plastic drinking straw from another vest pocket, bent down and hoovered.

Just like plugging in a cell phone. All his bars lit up! Yeah, baby! From Zero to Hero in five seconds flat. That bump would carry him all the way to the Kongo Klub where he couldn't wait for his first glass of Jack.

Larry straightened up feeling righteous. He glanced down the road—more loop the loops through the endless wooded hills. He looked up. The sky had changed color.

Someone had leeched the blue and turned it a sickly milky white. A tiny black dart headed east far overhead. Larry scanned his surroundings. The hills surfed into the distance like a coarse green blanket. He didn't notice the flies buzzing around his face. The tip of a red silo stuck up over the trees in a valley to the east. His eyes swept past four o'clock and doubled back.

Less than a quarter mile away to the northwest lay another gently rounded promontory peeking over the cornrows and this one was a county park, if you could call a patch of gravel, a trash barrel and a picnic table a park. A county mountie straddled his Milwaukee iron and stared at Larry through a pair of binoculars.

They both froze, each instinctively recognizing his mortal enemy. Larry's imagination clicked into overdrive. How much was he carrying? Enough to bust him for dealing? Did that fucking cop have probable cause? Fuck probable Cause! Larry knew cops. They didn't need no stinkin' probable cause. They'd been hassling him all his life. And that cop probably knew this county like the back of his hand, and was going to be on Larry's blue ass like white on rice.