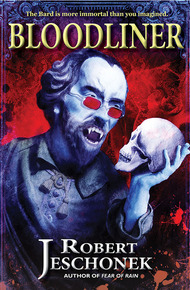 William Shakespeare still walks the Earth, but the price of his immortality is high. The Bard of Avon has become like a tragic figure from one of his own plays, cursed to live forever as a vampire. His goal in life after death: to find salvation in the lost vampire paradise of Empyrea. But a mortal man named Jonah Ivory might beat him to it thanks to the Bloodliner—Stanza Miracolo, a sexy and dangerous genealogist specializing in the paranormal. Stanza is on a quest to dig up the undead roots of Jonah's family tree and help him claim the key to his rightful heritage of Empyrea. But as they race around the world, scouring hidden cities and mystic realms for clues, who will take the prize—mortal Jonah, bloodsucking Shakespeare...or somebody far more terrifying? Does anyone stand a chance against the ruthless secret society led by the ultimate vampire warlord, Genghis Khan? On a battleground that spans the globe and history itself, only the passion between Jonah and Stanza could see them through a horror that threatens to destroy them and consume all humanity.

Robert Jeschonek is the bestselling author of more books, comics, and short stories than he can count. One reviewer called him "the love child of Tim Burton and Neil Gaiman." Yup, I agree with that completely. In this novel, Bloodliner, Robert's hero joins forces with a vampiric Shakespeare and King Arthur to fight for their lives against an ancient evil. As Robert says, Bloodliner is not a typical throat-biter. – Dean Wesley Smith

As Jonah Ivory sat between his parents' caskets in the parlor of the funeral home in Tucson, he finished his eighth beer of the evening. His goal was to drink a whole case.

Eight down, sixteen to go.

Crumpling the eighth empty can in his fist, he tipped his chair back and chucked the can behind the caskets with the other seven. Before he could tip forward and reach for number nine, however, his chair rocked off balance, and he fell back and down to the floor.

After the impact, Jonah lay there for a long moment, staring up at the ceiling. His eyes burned as the tears he'd been holding back tried to force their way out.

But he wouldn't let them.

I'm too young for this. Too young to lose them.

In fact, Jonah was seventeen years old...not that he looked it. He was skinny, with a boyish face, and he wasn't exactly wearing responsible grown-up clothes for a viewing: a black Jethro Tull concert t-shirt, ratty faded blue jeans, and sneakers.

But then there was his shoulder-length hair, which was prematurely white. It had been scared that way five years ago.

That was when he'd lost his two brothers, who had been abducted right in front of him. He'd been thirteen years old when it had happened...so maybe he wasn't too young at seventeen to lose his mother and father, after all.

First the twins, now my parents. I ought to be getting used to this by now. So why do I miss them so much?

It was a mystery to him.

Jonah hadn't been close to his mother and father for ages. Though they'd been living in the same house in Tucson, seeing each other every day, they might as well have been living in separate towns for the past five years. The loss of the twins had driven them apart.

But in the few days since the car accident that had killed his mother and father, Jonah had been feeling completely and irretrievably lost. All he could think to do was drink himself into a stupor and stumble through the motions of the prearranged viewing and the preparations for the funeral.

Why does it matter? We were practically strangers.

The biggest question of all, though, the one that loomed up in the gaps between lazy drunken sparks and ripples, was this:

Jonah rolled off the upended chair and got to his feet. He pulled his ninth beer out of the red and white cooler that occupied two chairs in the front row of seating.

As he snapped open the tab on the can, he looked around the empty room.

At least I don't have to deal with anybody.

Jonah and his parents were alone. Other than the undertaker, who had strolled through a few times, not one soul had shown up for the viewing.

After a long drink of beer, Jonah righted the chair he'd knocked over and sat back down on it. He glanced over at the closed caskets beside him, then quickly looked away as the reality smacked him in the head again.

Just as he lifted the beer for another drink, a young, black-haired woman walked into the room.

She was beautiful. As soon as Jonah caught sight of her, he lowered the beer from his lips. Her body was slender and shapely under her waist-length red leather jacket and short black dress. Knee-high red leather boots accentuated the curves of her long, lean legs.

As she approached, Jonah saw that her features were even prettier than they had looked from a distance. She had a long face and angular nose that gave her an exotic look—Italian, maybe, or Greek or Arab. She must have been wearing contact lenses behind her black horned-rim glasses, because her eyes were two different colors: one hazel, the other amber flecked with red.

Simply put, she was a knockout.

As bad a day as Jonah was having, he still automatically assessed his chances with her before she'd even said a word. He knew it in a heartbeat: she wasn't just out of his league, she was out of his universe.

Even if he hadn't been having the second shittiest day of his life, he probably wouldn't have bothered to make a play for her. That was why he didn't bother to get up when the woman approached him. He just stared out from behind his long, white bangs and burped softly.

"Hello, Mr. Ivory." She stopped a few feet away and didn't offer to shake his hand. She had a slight accent—Italian, maybe? "My name is Stanza Miracolo."

"Don't mind me." Jonah waved at the two closed caskets. "Go ahead and view all you like."

"Not here for that, thanks." Stanza slid two fingers into a vest pocket of her red leather jacket. "Here for you," she said, tugging out a business card and offering it to him.

When Jonah didn't take the card, she flipped it at him. The card landed face-up on his stomach, and he stared down at it.

Jonah brushed the card from his black Jethro Tull t-shirt. "You picked the wrong day to try to sell me something, lady," he said, and then he polished off his beer.