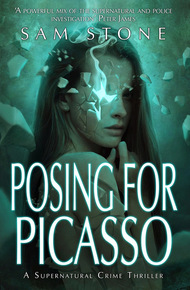 Award winning author Sam Stone began her professional writing career in 2007 when her first novel won the Silver Award for Best Novel with ForeWord Magazine Book of the Year Awards. Since then she has gone on to write 15 novels, 5 novellas and over 40 short stories.

Sam's first screenplay, The Inheritance, which is the first story in White Witch of Devil's End (a Doctor Who spin off anthology movie about white witch Olive Hawthorne - first seen in the Jon Pertwee era, The Daemons) will make its DVD debut in Nov 2017.

Sam has since written two more screenplays which are currently in pre-production.

She was the first woman in 31 years to win the British Fantasy Society Award for Best Novel. She also won the Award for Best Short Fiction in the same year (2011).

Sam loves all genre fiction and enjoys mixing horror (her first passion) with a variety of different genres including science fiction, fantasy and Steampunk.

Her works can be found in paperback, audio and e-book.

Sam currently resides in Lincolnshire with her husband David and cat Leeloo.

Posing for Picasso by Sam Stone

It was Annabel, and something was wrong with her features . . . He thought he saw a triangle, not an irregular jigsaw shape after all. And it was missing from her face. As if a sharp pastry cutter mould had been stamped through her skull.

When Detective Jake Chandler is called in to investigate a murder, nothing can prepare him for the gruesome sight of Annabel Linton ...  Annabel was the model of Russian artist Avgustin Juniper, who finds himself in the centre of the investigation ... but he had no motive. Criminal attorney Cassandra Mousa sees this as her next big case and will stop as nothing to prove her client's innocence.  But as more of Juniper's models die, Chandler's investigation leads him to four beautiful, unique women, and the lost diaries of Pablo Picasso.   Something wants to return ... and Chandler has to stop it.

Since my novel, Lauryn's novel, and Kris's The Tower are all fast-paced crime stories at their heart, I wanted to add one more crime story to the mix. So Sam Stone fit right in with her wonderful supernatural crime thriller Posing for Picasso. Like the other writers in this bundle, Sam has also had a multi-faceted career with over a dozen novels, a lot of short stories and numbers of screenplays. – Dean Wesley Smith

Pablo Picasso was rarely alone, but when he was working, the usual hustle and bustle of having his friends around was a constant distraction. For this reason, he never allowed anyone in his studio unless they were his chosen model for the day. However, that day he had picked no one, opting to work alone in silence on a realism piece that he had almost finished. It was a commission, and therefore was worth completing in order to get paid.

There was a clock on the mantelpiece and Picasso was aware of its loud, rhythmic tick in the background. It was soothing and it kept him grounded in time, aware that the day was passing and the working hours, and natural daylight, would soon be over. The clock reminded him that his friends waited in the salon, drinking his wine, eating his food, longing for his attention. It made him feel in control of everything, including time—because he never raced against its passing, but merely worked with it.

He stepped back from the canvas, pleased with the results of his hard work. Yes, the client would be happy with this portrait. He had appealed to the vanity of the wife, thus pleasing the husband, by making the woman appear thinner, prettier, even though she was somewhat plain and plump. He expected a generous monetary reward for his efforts from the husband. He washed his brush in a jar of spirit. The metallic smell wafted up to his nostrils, reminding him of the heady night he had spent the previous evening in the arms of a baffling woman. They were all mysterious to him until he unraveled them with his art, his passion, his obsession; she would be no different from the rest in the end.

"You're Picasso?" she had said. "Pablo Picasso?"

She was stunning and Picasso had wanted to paint her from the outset.

"Paint me then," said a voice behind him now. "Paint me as if your very life depends on it."

He turned around and looked at her. Perfect skin, pale blue eyes with the purest whites he had ever seen. Long blonde hair that flowed over her shoulders. She appeared to be an amalgamation of all of the various parts he had loved in other women. Long legs, small waist, swollen breasts that pressed against the sheer fabric of the robe she wore. Her voice held a musical quality unlike any other woman he had known.

She stepped around him and placed herself before his easel in the position reserved for his models. Then she took up a natural pose. She was not Diana, or Aphrodite, or any other contrived goddess that he had painted before. She was merely a woman and everything about her was sensual, earthy, beautiful.

Perhaps she was Gaia, because surely, she exuded nature and nurture and all that Mother Earth was known for.

Picasso shook away all of these excessive thoughts and replaced the canvas on his easel.

He began to outline her perfect shape. The ticking of the clock became muffled in his ears and then receded to nothing. It was as though all sound had been taken from the room, and the silence that remained was startling and loud. It cocooned him, allowing him to sink completely into his work with no thought of the outside world.

The brush swirled and flowed over the canvas with flesh tones and pastels and all manner of colors in between, and yet Picasso did not deliberate on them as he usually did. Nothing could hold him back. For once there were no fears of failure, no torturous decision making on tones, no worry of inappropriate shading. All he thought about was that he must show her as she really was.

As the last stroke flowed over the canvas, Picasso closed his eyes. This was the masterpiece that he had spent his whole life striving for. This was perfection. This was a moment to savor.

He opened his eyes and stared at the canvas. For a moment, he could not make sense of what he saw.

He glanced back at his new model. Piece by piece.

When Picasso realized what he had done, he dropped his brush to the ground and turned toward the door of his studio with the intention of fleeing.

Blood pumped hard through his veins, his heart hurt, and revulsion stole the sound that tried to screech past his lips. Sickness rose with acidic bile into his throat. He swallowed, barely keeping it down.

A hand caught him from behind.

"You will not turn away from me," she said.

Picasso was spun around by impossibly strong hands to face the object of his terror.

The bile pushed forth and the sickness took him.

Released, he collapsed into the pool of his own vomit even as his bowels gave out. He sat in that vile smelling pool, reeking of shit and piss and sickness, unable to move.

His eyes burned behind his tightly closed eyes. He didn't want to see her again.

He shook his head even as her hands clawed at his face. He couldn't fight her.

His eyes opened as though with a will of their own and Picasso found himself face to face with what he knew was the darkness of his own soul.

"What do you want?" he croaked.

His acid-seared throat hurt and he wondered if he would ever whisper words of passion to any woman again. For what was seen could not be unseen.

Anxiety took him then, and he fell mercifully into a dark place inside himself.

When he awoke he was alone, and the canvas before him was blank.

He pulled himself to his feet. Glancing down he expected to find himself still in his own stink, but he was clean and there was no sign of sickness on the floor.

He stroked his forehead. The night before had clearly taken its toll. Relief flooded his cheeks red, even as the image of the woman, and the painting, flashed behind his eyes. It had been so vivid but it had been a hallucination. There was no woman, he was alone, and had blacked out.

He staggered to the door, reached for the handle, hands still trembling.

"I've been working too hard," he murmured but his voice cracked around the words.

For the first time Picasso was aware that time was no longer his friend. The clock started ticking again on the mantelpiece, louder, faster than it ever had before, as though to illustrate that he had so little time left.