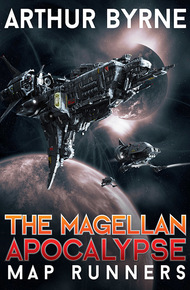 Brian D. Meeks (Arthur Byrne) is a full-time author who lives on the Las Vegas Strip. He writes, both as himself and Arthur Byrne, who is the protagonist in the Underwood, Scotch, and Wry. In addition to science fiction, (The Magellan Apocalypse trilogy and Beautiful Gears as Arthur Byrne), Brian has ten-book Epic Fantasy series, The Chronicles of the Fifth Kingdom (being released every month through March of 2020.)

He also writes books on the business of being an author, provides coaching for authors on advertising and copywriting, and takes guilty pleasure in looking at pictures of guinea pigs. They're adorable.

Brian had a degree in Economics from Iowa State University and is an alum of Ames High School (same as Neal Stephenson…which is cool) and is a former data analyst.

A new world waited for the Magellan.

A new alien race waited, too.

Who will win, the humans, the aliens, or the cruelty of deep space?

When a massive attack leaves the Magellan crippled en route to their new home, there are more questions than answers. Nash leads the Map Runners. Their job, survey and survive.

On a ship that has thousands of cubic miles to explore, with danger lurking behind every turn, and a commanding officer that wants Nash dead, will his next run may be his last?

If you like post-apocalyptic space opera, then this is the series for you.

Fristion Nash, a fighter pilot, stood on the observation deck of Cargo Bay 37 looking out into space at the ships gathering to defend the Magellan.

That morning at roll call he'd volunteered to fly a load of flash-frozen beef from the cattle processing plant on the port side of the ship to Cargo Bay 37 on the starboard side. The Magellan had slowed as they passed by twin planets that were rich in water but uninhabitable by humans.

Three years into a twenty-year journey to the new solar system and there hadn't been so much as a hint of trouble. Now their first battle was to begin, and the automatic lockdown that was protocol had Nash on the bench.

It was bad enough he wasn't out there with his buddies, but something had happened to the communications, and he had no idea what sort of threat they faced.

Nash didn't have to wait long. His tiny window on to a minuscule fraction of the battle kept him on his feet for almost a full day until there wasn't anything more to watch.

Ten years later Nash still hadn't made it back to his squadron, and Cargo Bay 37 remained on lockdown.

Fristion Nash pounded on the door and refused to use the password. "It's me. You know it's me. Now open the damn door."

The guards gave in. "The commander wants to see you."

"Then why were you wasting my time?"

Nash climbed the stairs to the commander's office and knocked.

"You wanted to see me, Frank?"

"Did you get through?" the commander asked without looking up from his papers. He had a way of pretending to be busy, so his subordinates were clear that every aspect of his work was more important than them. It annoyed most of the crew.

"They likely have nothing but an empty hole into space, and you know it," Nash said.

"We have no idea what state they're in, and they have just as good a chance at having survived as we did."

Nash went to the map table and fired up the hologram. It popped to life and cast a warm blue hue over the meticulously organized office. "I followed the same route I've taken the last ten times you've sent me on this fool's errand. It leads to what used to be Welder's Town. No atmosphere or gravity, and all of the doors are locked down."

Nash answered, not making even the slightest effort to hide that he was annoyed, "Yes, I've scoured every inch of the ten stories, and there isn't a way through. We've been at this for three years. Two kilometers up, one out, and about one and a half down, and nothing. I've been over most of it twice."

The commander joined him at the table and spent a few moments examining the route. "The scavengers are always cutting holes through walls; it's good to go back over the space."

"Yes, and usually there's a pack of those filthy bastards camped out on the other side. We don't have the air tank range, and there aren't any functioning charging stations."

"What if we tried going farther up?"

"Damn it; you're not listening. The only way to go more than two kilometers up is through Tunnel 85, and there aren't any junctions until you get to the platform for the Jade City route. There isn't any reason to believe life support is working along the way, and I'd need to use 85 percent of my air tank to make it to the junction. It's a one-way trip, and you know it."

"We need to extend the range of the tanks."

"That's engineering's thing; I can't help you there. There are hundreds, maybe thousands, of routes we've not mapped. We're wasting our time trying for 36, but you're the boss... Just keep giving me the command, and I'll keep banging my head against the hull. I spent seven days, like always, and when I wasn't hiding from scavengers, I was trying to find my way through, but I'm telling you, it just isn't there to be found."

The commander stared at the hologram and said with a heavy voice, "Dismissed."

Nash gave a mocking salute and walked out. He went down to the map runners' locker room and got out of his suit.

Holly walked in and asked, "How'd it go?"

"What are you doing here? Don't you have beer to schlep?"

"The hell you are. I've never had a tracker, and I don't need one now, especially not some kid," Nash said as he stored his holster and weapon in the top of the locker.

"I'm not a kid, and the commander hired me, especially for you."

Nash slammed his locker door shut and went back to the commander's office, but this time, he didn't knock. "What the hell, Frank?"

Holly came in behind Nash.

"I fly solo. I'm not going to have one of your damn trackers buzzing around in my ear while I'm getting shot at by scavengers or the Navereen."

"It's not a suggestion."

Holly said, "I've been through the training and finished with a perfect score."

Nash looked at her and said, "I thought you were sixteen."

"I was, ten years ago, when we got attacked."

"When am I scheduled to go out again?"

With disgust, Nash left. Had it been ten years? He needed a long hot shower and an even longer drunk. Nash's time off before the next run was shorter than usual, but it was still four days. He intended to make them as blurry as possible.

Fiel Block, Frank's twin sister, and right hand came out of the secret door behind his desk. "Why do you keep sending him on that wild goose chase?"

"I don't trust him, but I have my reasons for wanting to get to 36 that don't concern you. I care little about whether he thinks it's a waste of time. Plus, I like knowing what he is up to."

Fiel was used to her brother's idiosyncrasies and knew he would tell her his secret in his own time. "Yes, but he's our best map runner, and who knows how much territory could have been covered if he had been..."

"The wrist maps weren't done, and I couldn't risk it, but now that they are, I'll let him get to something new...for now at least."

She looked at the map and said, "There's so much to cover."

Frank studied the halo map and said, "It's slow, yes, but there aren't many who can do the job without getting killed their first time out."

"PJ Garnett mapped a nice little section on the other side of the smelting rooms," Fiel said as she pointed to the spot.

"He reported in while you were visiting your little friend," Fiel said with a tone of disapproval.

"You have your share of little friends, sister dear, so I don't want to hear it."

Fiel zoomed in on a section of the hologram and pointed to a wall and said, "This wall he said was cut open, and it looked like there had been a small camp on the other side. He couldn't tell what it used to be; his best guess was storage."

The commander let out a sigh and asked, "Scavengers?"

"He wasn't sure, but he's probably too new to tell the difference between them and a Navereen camp."

"You think it was active?" the commander asked as he returned to his desk.

"If it was Navereen, then probably not, because they tend not to return once they've left, but the scavengers seem to like to have three or four spots and move between them."

"Do we have any judgments on the calendar?"

Fiel answered, "There was one this morning: an electrician who got drunk and started a fight."

"How far was it to the area PJ just mapped?"

"Good, set up his wrist map so that it steers him that way."

"How far was it to the area PJ just mapped?"

"Good, set up his wrist map so that it steers him that way."