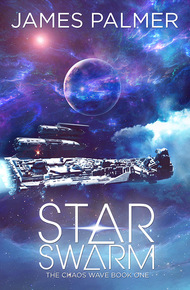 James Palmer is an award-nominated author of science fiction and pulp adventure who has written articles, reviews, short stories, novels, and comic and audio scripts for a wide variety of publications and publishers. He is the author of the space opera novel Star Swarm and its Sequel, Ix Incursion, as well as a series of novellas in the Shadow Council Archives universe for Falstaff Books. He adapted the late Jerry Pournelle's classic novel Exiles to Glory into an audio play for the Atlanta Radio Theater Company. A recovering comic book addict, James lives in Northeast Georgia with his wife and daughter, three dogs, and a metric crap ton of books.

Man's outer colonies are being destroyed one by one, leaving nothing behind. Suspecting an old enemy, Captain Henry Kuttner, of the Solar Navy rail-gun sip the Onslaught, wants to investigate.

But the Onslaught is scheduled to be decommissioned, and Captain Kuttner given mandatory retirement. But this old war dog isn't going down without a fight. Going against orders, Kuttner leads his crew in search of answers. That search leads straight into the territory of mankind's former enemies, the reptilian Draconi, whose colonies are also being destroyed, and they blame man.

Now the crew of the Onslaught must risk violating a fragile peace treaty and all-out war to solve a cosmic mystery before more lives are lost. Only the ship's maverick first officer and a disgraced Draconi scientist can unravel the secret of this enigmatic enemy before it's too late.

Meanwhile, in the outer dark, an ancient enemy returns. An enemy known only in the songs of a long-dead alien race. An enemy that leaves chaos in its wake.

Bushes thrashed at his face, roots snagged his boots, but still Commander Hamilton ran. He saw the flick of a green-black tail as the DRaconi moved deeper into the jungle. Hamilton ran after it, hands held in front of his face to keep jungle branches from slapping into him, until he emerged in a small clearing. He looked around, panting. The jungle was eerily quiet.

A heavy form exploded from the trees that ringed the clearing, landing atop Hamilton. He tried to reach for his gun, but ataloned foot had his hand pinned to the wet earth. His eyes took in his attacker. A Dragoni female, was straddling him, holding a short, curved blade at his throat. He took in her uniform, noting that it was not the garb of a soldier.

"I don't like having pointy things shoved in my face," he said.

The Draconi gave him a predatory sneer, licking her sharpt teeth with a thin tongue. Hamilton noticed an area on the left side of her head that looked as if it had been scoured by something abrasive.

The Draconi cocked her head to one side, as if she were either considering his question or wondering which part of him was the most delicious.

Hamilton heard the heavy thrash of the marines as they ran toward his location. "They'll be here soon," said Hamilton. "And they'll shoot first, then ask questions. I'd like to do things the other way around."

The Draconi's head shot up and forward, nose sniffing the jungle. It looked back down at him a final time before easing off of him.

Hamilton climbed to his feet. "Thank you," he said, coughing.

Dutton and his marines erupted from the jungle just a few feet away, weapons raised. "Move out of the way," Commander," said Dutton. "And we'll light this bastard up."

"Not gonna happen, Sergeant," said Hamilton, raising his arms as if in surrender, his eyes still on the Draconi. "I need answers."