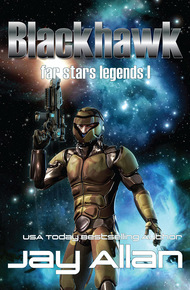 Jay Allan is a former investor and the author of the Crimson Worlds, Blood on the Stars, and Far Stars series. His books are typically written with a nod toward plausible physics and science…but he is not above putting a sword in the hero's hand upon occasion.

When not writing, he enjoys traveling, running, hiking, and reading. He loves hearing from readers and always answers emails. He lives in New Jersey.

Jay has been fortunate enough to produce many best selling books, and he is currently finishing up the first book in a new series.

Blackhawk. A wanderer, a man running from a dark and sinister past. A genetically-engineered warrior, and a capable and accomplished killer, he is also a lost soul, a man who has fled to the deepest reaches of space seeking his true identity.

The Far Stars. The farthest extent of human habitation in the galaxy, a sector of a hundred inhabited worlds, a dangerous expanse full of pirates, mercenaries, and cutthroats. The sector is a rough and rugged frontier, lying beyond the darkness of the great Void, and the only place in all the vastness of space where men live free of the brutal empire that rules the rest of humanity.

Celtiboria. Once the premier world in the Far Stars, now a planet wracked by brutal civil war, driven to the edge of a dark age by the unending struggle among its Warlords for power and control. It is on Celtiboria where Blackhawk meets Augustin Lucerne, one of the feuding generals, and something else, something Blackhawk has never known. An honorable man. Blackhawk's wanderings have brought him to a stark choice. He can continue on his way, drifting from world to world, alone and without purpose. Or he can join with Lucerne, fight at the Warlord's side in a desperate battle to bring justice to Celtiboria's billions. But whatever he chooses, he will have to face the demons that have pursued him across the stars, and hold at bay the dark version of himself that still lives deep within his mind.

Mankind inhabits a huge swath of this massive conglomeration of stars, an entire spiral arm explored and colonized eons ago. Humanity's origins are forgotten, its birthplace long a lost legend, buried in the endless depths of the past. Little is known of mankind's expansion into the stars, of how so many worlds were settled and tamed. There are vague histories, as much legendary as factual, of civilizations that rose and fell, leaders who achieved great glory and were remembered…and then mostly forgotten. Great fleets that clashed, deciding the fates of billions. Armies that marched across worlds, cities destroyed and then rebuilt. Humanity pushing out ever farther from its home world, settling a thousand worlds before falling into a dark age.

But now, mankind's lost glories are forgotten, the independence and spirit of its early adventurers gone, replaced by terror, by slavery. For the empire that now reigns over those worlds of humanity knows only one way to rule. Fear.

On a thousand worlds, people live in terror, crushed by their masters at the slightest signs of disobedience. For a millennium the emperors have ruled humanity with an iron fist, and everywhere men and women look up to the sky, they live under imperial control. Everywhere save the Far Stars.

Into this untamed frontier a man fled. He had been a warrior, a soldier of great ability, the product of a select breeding program…but that time had passed, and it was a broken man who escaped to the frontier of humanity's dominion, haunted by a dark and terrible past.

He left his old name behind, took a new one, one utterly anonymous, but not for long. For where he goes, violence and death follows…and soon his new name will spread throughout the Far Stars, a cry of hope to some, a bitter curse to others.