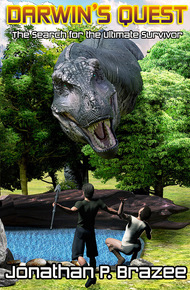 Jonathan is a retired Marine infantry colonel and now a full-time writer living in Colorado Springs with my wife Kiwi and twin baby girls, Danika Dawn and Darika Marie. He is a two-time Nebula Award Finalist, a two-time Dragon Award Finalist, and a USA Today Bestselling writer.

They all want to kill you? Check.

Corter Laurence beat the odds to get selected as a contestant for Darwin's Quest, the most popular reality show in the galaxy. All he has to do is outlast his other 15 castmates and the money and fame will be his.

Darwin's Quest is not for the faint-hearted, though. The show is beset with dangers, both natural and man-made, and the winner truly is the "Ultimate Survivor."  Although each season is a little different and has its own theme, initially, the show proceeds as can be expected. Contestants are eliminated, and the viewing audience votes to bring some back for another chance.

But then something goes awry, and the castmates lose all contact with the production staff.

Abandoned on a harsh, dangerous world, they now face an actual, desperate fight to stay alive. Darwin's Quest is no longer a reality show, but reality.

The roaring was getting louder, the crashing of bushes closer. I looked back and could see the treetops jerk and sway from where we'd just run. Whatever it was, it was big and angry, and it was on our trail.

"Hurry up," I shouted to the middle-aged woman stumbling ahead of me. "It's getting closer!"

She mumbled something over her shoulder. I didn't even know her name yet. We'd already lost one person to something I hadn't quite seen, and now, here I was, at the back of the pack, behind a rotund woman quite evidently out of her element.

She stumbled and fell in front of me, almost taking me down with her. I grabbed her by the shoulder and jerked her up, heedless if I was rough on her. We had to get to Haven!

Bushes threatened to strangle the path. I gave her ample backside a shove and pushed her through the shrubs which threatened to close off the way forward. We broke past and entered a small clearing and the welcome sight of a primitive rope bridge leading to what had to be Haven. The rope bridge was about 15 or 20 meters long, and it led to a small mountaintop, an island with sheer cliffs ringing it. It was the first time I had seen it, but it had the look of other Havens.

Two guys were already across, urging several more people to hurry and join them. One of them, a compact, strong-looking man looked somewhat familiar, but I couldn't really take the time to figure out why. The other guy had on some sort of turban. Four people were on the bridge, but with each movement, it swayed and caused others to lose their balance. No one was making progress.

"Stop it, all of you! Listen to me!" a redhead in matching khaki shirt and pants screamed, her shrill voice cutting through the babble. "One at a time, or none of us will make it! You there," she pointed at the guy farthest along the bridge, "go across, and you others hold still!"

The guy nodded and started moving, making his way to the other side where the other two grabbed him and pulled him to solid ground. The three looked back to Ms. Redhead, waiting fore the next to go across.

I was glad that someone had taken charge. We all had to get across, and fast. This was too early to fall. I looked back. Whatever was trailing us had paused. I hoped we'd somehow lost it, but I doubted it. That would be too easy.

The next woman made it across, and Ms. Redhead was playing traffic cop. My rotund trailmate and I had by now caught up with the rest and milled about the bridgehead.

"Are you the last one?" Ms. Redhead looked at me.

"Yeah, no one else behind me." I tried to catch my breath.

With her taking charge, the next five or six made it across in short order. Then, the roaring started up again. Those of us on the near side of the bridge jumped in unison and looked back. A treetop swayed and went down. Whatever it was, it was big. I have to admit; I was getting pretty nervous.

In the middle of the bridge, a skinny guy who couldn't have been more than 18 or 19 froze. He was staring down at the river which bounded over the rocks 30 meters below. His hands were in a death grip on the left handrope.

We all started screaming at him to get going, but he wouldn't budge. Two other guys started to move forward toward the bridge, but Ms. Redhead stopped them, then moved confidently to Skinny Guy. She spoke quietly to him for a moment. At least I assumed she spoke quietly. It was hard to hear over the growing noise behind us.

She put one hand on his and firmly pried it off, and pulling him close, she walked him step-by-step until she was over. As soon as the others pulled them off the bridge, she motioned for the next one to cross. The muscled guy went next, even though it looked like an older man was about to go. The older guy muffled a curse, then started across on his own as soon as he got the signal.

Three of us left. I kept looking back. I could hear breathing now, the sound of huge bellows going in and out. Maybe it was my imagination, but I could almost smell the fetid breath of the unseen monster. I looked back as the old guy reached the far side. I wanted to pull off what the muscle-guy did and push my way onto the bridge, but I held my ground despite my baser instincts.

The next lady moved out onto the bridge. I watched her, willing her across, when a huge crash sounded right behind us. My trailmate and I whirled in unison. Towering above the bushes we had just pushed through was a T-Rex. A living, breathing, and very angry-looking tyrannosaurus. His small red eyes looked over the scene before locking onto the both of us. He snuffed the air loudly.

We both backed up to the bridgehead, my butt pressing into her, her hands against my back.

He (or was it a she?) looked at us as if measuring us up. His sides moved with each breath. We could hear the people behind us yelling at us to come across, but with us frozen in place, he wasn't moving, and I liked it that way.

"You go ahead," a soft voice whispered beside me. My trailmate was getting noble.

"Are you sure?" I could hear the hope in her voice.

I could feel her move away from me. The T-Rex just stared, not moving. Why wasn't it attacking? The ropes creaked as she put her weight on the bridge.

Everything was OK for a few moments, if you can call being stared down by a T-Rex OK, that is. Then I heard a scream and the creak of the rope jerking as my trailmate evidently stumbled. That seemed to galvanize the dinosaur. He seemed to move ponderously forward, but he was so big that he covered the ground between us in seconds. I tried to dart to the right, but his leg reached out and knocked me off my feet. He stepped on me, pinning me down. I could feel my ribs crush as he put his weight on me. Squirming in mad fear, I was able to turn up and face him. Oddly enough, despite the intense pain, all I could think about was that his breath was in fact as fetid as I had imagined it as his head came down, huge jaws open. Then darkness.