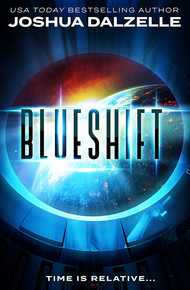 Joshua Dalzelle is the author of the bestselling Omega Force Series and Black Fleet Saga. He has worked in aerospace and aviation for the majority of his non-writing career including ten years combined in the U.S. Air Force. He attended graduate school at Embry-Riddle Aeronautical University, majoring in aeronautical science and specializing in space studies. After the release of Omega Rising in 2013, Joshua pursued a fulltime writing career and has since published eighteen sci-fi novels across two series. Joshua currently lives in a quiet suburb outside Cincinnati with his wife and son.

If you could be the first to lay eyes upon a planet orbiting a distant star, would you go?

The members of the Polaris Project knew what they were giving up when they volunteered to fly to the star named Angel-21, but the allure of being the first explorers to leave the Solar System far outweighed the risks. As it turned out, the most dangerous thing they faced wasn't the mission … it was the homecoming. Eight hundred years have passed and Earth is nothing like they thought it would be.

As Commander Markus Brentwood scrambles to uncover the mystery of what's happened to Earth in their absence, he also must contend with an increasingly dysfunctional crew and a damaged ship that's flying on borrowed time. What should have been a joyous return home after a long, hard mission has turned into a race to see which nightmare would kill them first.

"From what I can tell, Simmons died almost as soon as he went to sleep, and Wakens had a pod malfunction … she died under heavy acceleration but the data logger shows she was asleep for the event." Jelena's voice was clinical, sterile.

"Damn," Markus muttered, but it lacked any real feeling. This made seventeen lost in total, eleven during the stasis cycles, three during an EVA to repair their high-power com array, and three more who had succumbed to an airborne illness that started in one of the greenhouse chambers. Over two-thirds of the ship's original complement were dead. Now that the grueling mission seemed to be coming to a close, he was surprised by his lack of feeling at the announcement. But why should he burn calories pretending to care? Anybody that knew the deceased would themselves have been dead for centuries, their names long forgotten.

It had been over eight hundred years Earth-time since Daedalus had launched, but the ship had experienced barely half of that thanks to special relativity and the phenomena known as time dilation. As the deep-space exploration vessel roared closer to the speed of light on her nuclear pulse engines, time slowed aboard Daedalus, for lack of a better term. Even with the compression of time dilation the crew was technically hundreds of years old, but they'd only been awake, and aged, for eight and a half of those years due to their extended time in stasis. They all knew what they had been signing up for when they volunteered: They would be returning to a planet and society that would be completely foreign. Assuming they returned at all.

"We've been receiving something, but it isn't coming from Earth," Nigel spoke up. "I'll have a better idea of an exact location the closer we get, but it appears to be coming from Mars. It's not a signal we're able to decipher yet, just a short burst that repeats over and over. I've got Jordan getting a computer set up to do the analysis."

"That'd be my guess," Nigel said with a shrug. "Maybe Earth isn't using RF-based broadcast tech anymore. Who knows … I had put my money on an faster-than-light ship being developed and beating us to Angel-21 or at least meeting us on the return trip once our blueshifted light was detected."

The four of them fell into silence and continued to eat without extraneous conversation or unnecessary eye contact. Since the Polaris Project was a private enterprise and completely civilian-funded, they had opted not to adhere to the rigorous crew selection process that the governmental space agencies demanded. Markus suspected that may have been a mistake. It wasn't just that he didn't particularly like most of the people aboard Daedalus, it was that he didn't trust them. His chief engineer, Nigel, had been known to cut corners and then lie about it when caught. It wasn't that he was lazy, far from it. It was more that he assumed he knew more than the mission commander about what to do and rather than argue for his own solution, he just did what he wanted anyway. When confronted, he would bluster and blame it on one of his technicians.

Their flight surgeon, Jelena, was a British expat with an IQ of 146. Her accomplishments were as varied as they were impressive in the fields of biology and infectious disease, but the woman was a borderline sociopath. As with most who have such a high intellect, her inability to empathize or relate to her fellow crewmates was a constant pain in the ass for the mission commander. Had he been given a choice in the matter, Markus would never have approved her for a long-duration flight.

An insistent beeping shook Markus out of his ruminations. "The big boss should be ready to get up and start moving," Jelena said, consulting her tablet and silencing the alert. "He'll be fully up and about by the time we're crossing Saturn's orbit, per his instructions."

"Wonderful," Markus grunted. "I can't believe that—" He never finished his sentence as the deck below them lurched, followed by several sharp bangs that reverberated through the ship. Red lights flashed and alarms blared while Nigel ran to one of the wall-mounted terminals to see what had happened.

"You better get to the flightdeck, Mark!" the engineer shouted over the alarm. "Fuel pressure is dropping in the expansion tanks for engines two and four. The computer has already shut them down and is locking down the storage tanks."

"Get down to the engine service bay!" Markus yelled over his shoulder as he climbed the ladder towards the access tube that ran the length of the ship. He ignored the moment of vertigo as he flipped out of the rotating habitat drum and into the zero-g environment of the tube. As he pushed himself along, grabbing the handholds that dotted the bulkheads, he fervently hoped they hadn't lost too much fuel.

The computer had shut down and secured their nuclear pulse engines automatically once they'd cleared the Kuiper Belt, and they'd been continuing their deceleration on the massive chemical boosters that would smoothly and precisely put them in orbit over Earth. If the engines were damaged or had lost too much fuel, they were in a real spot of trouble. The pulse engines couldn't be restarted in time to decel them enough for orbital insertion, not to mention they couldn't operate them while outside the protective confines of the stasis pods. There were two other failsafes aboard, but they'd been dormant for the entire trip and Markus was loathe to trust his life to them. If they couldn't decelerate enough to be captured by Earth's gravity, it was likely over for them; at their current levels they wouldn't have enough fuel to sling around the Solar System for another attempt.

Daedalus was deceptively large. Crew spaces only accounted for sixteen percent of the ship, and that included the chambers their stasis pods were mounted in. The other eighty-four percent was given over to engines, fuel, and the machinery that allowed humans to even attempt such a foolhardy journey. Of the six massive rotating habitat drums that provided gravity, only two were used for the crew. Three housed the myriad of flora that helped feed them as well as filter much of their air and water. The sixth was now just storage since the rotary drive had seized up halfway to Angel-21.

The flightdeck was near the front of the ship, just over one hundred meters from where the crew had been eating in D-Ring. By the time Marcus glided into the zero-g compartment, the monitors near his station were already scrolling a running assessment of the damage and a window had opened up showing live video of Nigel frantically checking his instrumentation.

"What've you got, Nigel?" Markus asked after slipping the headset on and strapping himself into his seat.

"Expansion tank two has ruptured and the proportioning valve on the crossover line to number four failed in the open position!" Nigel had to shout over the screech of machinery in the service bay. "This is bad, Mark. We lost over six hundred thousand kilos of fuel before the damn computer shut off the main valves to the storage tanks."

Markus turned to another terminal and began doing a series of calculations based on what his engineer was telling him. The news was grim.

"We still have enough for a full decel … just," he said. "But without Expansion Two, can we fire all four chemical engines?"

"Yes, but only at forty percent thrust … maybe a little more," Nigel said. "Everything is stabilized down here and there's nothing more I can do. I'll send Jordan out to see if we can figure out what happened."

Markus leaned back and exhaled loudly.

"How screwed are we?"

The voice made him jump in his seat, he hadn't heard Miriam glide in. "We have some options even without the main engines," Markus said. "With the crew so … reduced … we can be a bit more flexible, but we'll have to make some decisions quickly."

"Commander, we have a problem down here," Jelena's voice came over the intercom. "Could you please report to pod bay two when you can?"

Markus and Miriam looked at each other and shrugged … what the hell could be going on by the stasis pods?