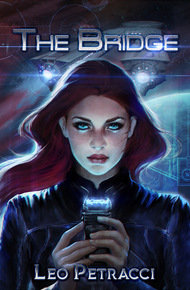 Leonard Petracci is a recent graduate of Georgia Institute of Technology currently living in Jacksonville, Florida. In his spare time you can find him taking advantage of the outdoors, from hiking to the beach to snowboarding. Leonard's favorite genres are Fantasy, Science Fiction, and Horror, and he believes the best use of his Engineering degree is adding realism to his stories.

The Bridge by Leo Petracci

A starship is struck by an asteroid on its way to colonize a distant planet. Now, hundreds of years later, the inhabitants must learn to survive deep space without technology or perish. With the ship split in two and the citizens fragmented, disaster is imminent. Food runs short, the water reclamation units are disrepair, and power is faltering.

Join princess Airomem and Horatius the historian as the fate of the ship rests in their hands, from fighting cannibals, to preventing starvation, to discovering long hidden secrets. Can they survive? Or will the thousand year journey end in failure?

The asteroid was called the Hand of God when it hit.

Not that we know much about God, of course. There are plenty of books that survived the destruction, though the readers far more sparse. And those that could spouted nonsense after a few pages, about things called suns and moons being created, about talking beings called "animals," about oceans. About legends of old, myths, wishful thinking. But what I do know about God is, if his hand caused the damage to the ship, I don't want to know much more.

The stories say that the ship used to be one before it hit. That the asteroid split the ship right down the center, making the way to the other side dangerous, impossible. But we can still see it, entangled in cord and moving alongside us, and we can see in their windows. We can see the faces far more gaunt than our own, the cheeks near bone, the eyes hollow and staring hungrily back at us. And we can see them fighting, using knives stashed from the kitchen along with strange flashing devices, and though we cannot hear, we know they scream.

There is a third part of the ship as well, this one with no faces in the windows, all dark and barely held to the main two parts. But no one has ever seen movement there, and it is far smaller than the halves.

There are one thousand of us on our side, a census conducted each year by scratching marks into the cold wall, making sure we have enough to eat. Any number over eleven hundred has led to shortages of food, and more importantly, water. As one of the gardeners, I know this too well, planning out the ship's rations and crops, utilizing the few rooms remaining with glowing ceilings. Deciding if I plant only those seeds specified for meals, or if we could splurge on space for the herbs demanded by our doctors or the spices requested by our cooks.

We worked together on the ship, each of us with our task for survival, none of us expendable. At ten, a child was assigned their task, from chief to scourer, based upon the skills they possessed. That first year, they were evaluated, deciding if a change was necessary, and I had been applying for the coveted historian. For keeping the tales and the knowledge from long before, from where the recovered books on ship census marked twenty-five thousand.

In the stories of old, it is said that God could speak even if he couldn't be seen. That he could be heard as a voice alone, sending commandments down to his people.

"Systems rebooting," said the voice, jolting me out of my duty of watering the plants. "Ship damage assessed. Reuniting the two halves of the ship and restoring airlock, approximately twenty-four hours until complete."

Staring out the window, I saw the cables holding the halves of the ships tighten. I saw the eyes of the hungry faces widen as they were dragged closer.

And I wondered if the hand of God was striking again.