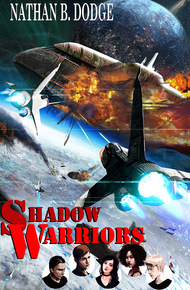 Educated in electrical engineering, Nathan worked as an engineer and engineering manager, primarily at Texas Instruments, before joining the University of Texas at Dallas as a teacher. He taught full-time for 16 years and continues to teach half-time.

He is married to Faye Lynn King, Ph.D., herself a long-time professor of Social Science in Dallas. She is Nathan's copy editor, specializing in grammar and preventing the author from his most frequent bad habit of using too many commas. He has three daughters, the youngest of which, Sharon, is also an author.

Nathan began writing seriously in 2012 and has attended seven Superstars Writing Seminars. He has a story in the Purple Unicorn Anthology with daughter Sharon, and a short story sale to Mike Resnick's Galaxy's Edge. Shadow Warriors, the first of a young adult science fiction series, is his first book sale. He and Sharon will soon release an anthology of SF stories, To the Stars.

Nathan's background is in computer engineering, and he still conducts a sophomore course in digital circuits, assembly language programming, and fundamentals of computer architecture. His teaching awards include two as Best Teacher in electrical and computer engineering and a top teaching citation from the university.

Shadow Warriors by Nathan B. Dodge

Five misfit teens kidnapped to space must create a fighting force to confront an alien threat. Can they save themselves, save Earth, and save their own kidnappers?

Cal's father is drinking himself to death over the passing of his wife. He has lost his job and spent himself into complete bankruptcy. Their home is posted for foreclosure.

Letty's parents started out poor, but the business they founded has made them rich. Now, though, they fight all the time, and it's driving Letty crazy.

Tony has lived on the street for months with his prostitute mother, but he woke up this morning to find her dead, OD'ed on drugs.

Ophelia is the daughter of a billionaire, but her father died mysteriously and now her stepmother is plotting to take all her inheritance.

Sasha lives in a foster home with an abusive family that feeds him scraps and threatens that if he complains, they will send him to jail.

All five have terrible personal problems—and then one day, they wake up aboard a spaceship, kidnapped. They must train as the crew of a galactic fighter to defend the very civilization that has abducted them. The enemy is a predatory, unstoppable enemy that threatens the entire galaxy, including their home planet Earth.

Most of these "Shadow Warriors" hate each other, and none of them wants to train or fight, but regardless, they will be summarily loaded aboard a fighter and sent into battle to die. Train they must—and yet, they can't even get along.

Can they coalesce as a team and go on to become a top fighting crew—to save themselves and save the Earth?

A gripping new adventure series in the spirit of Ender's Game!