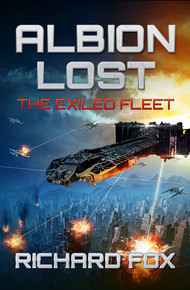 Richard Fox is the author of the Ember War Saga and Exiled Fleet series. His novel, Iron Dragoons, won the Dragon Award for Best Military Science Fiction or Fantasy novel.

He lives in fabulous Las Vegas with his incredible wife and three boys, amazing children bent on anarchy.  He graduated from the United States Military Academy (West Point) much to his surprise and spent ten years on active duty in the United States Army. He deployed on two combat tours to Iraq and received the Combat Action Badge, Bronze Star and Presidential Unit Citation.

For centuries, the Daegon waited. They plotted. And now they are ready to strike.

The core worlds of settled space enjoy a tenuous peace, unaware and ill prepared for the threat building beyond the furthest reaches of humanity. The star kingdom of Albion stands as a shining light of justice and mercy in a harsh galaxy, and they will be the first to suffer the Daegon's fury.

Defying his low born status, and despite his self-doubt, Commodore Thomas Gage has risen through the ranks by sheer grit and determination, defending Albion from brutal pirate clans.

And when the onslaught comes, Gage and his fleet may be Albion's last hope for freedom.

A tremor passed through the deck plates and into Captain Jimenez's chair as his ship came out of slip space. The air vents feeding the bridge blew a gust of hot air over Jimenez and his crew, all of whom opened their shirts and began cursing the chief engineer who'd promised the air conditioners were fixed.

Glancing at a screen attached to his chair, Jimenez saw green and amber conditions across the board. None of the systems on theCabo had failed during the translation from faster-than-light travel, which was a significant improvement from the last engineer's performance.

Maybe he wouldn't space the engineer just yet.

As the ice world of Sevastopol shined like a full moon through the bridge's windows, his metal left hand twitched at the memory of working the mines as a child. Jimenez brought his oversized, spiked cybernetic hand to his collar and popped the top button with a flick of thorn-tipped nails. That he'd lost the original to frostbite on that godforsaken planet was a secret. He preferred his crew—and anyone else who ever heard of Iron Hand Jimenez—to come up with their own story as to how it happened; the imagination did wonders to build fear.

As a pirate, Jimenez preferred to work smarter and not harder; it was much better for the bottom line and life expectancy. Hailing a targeted ship and looking the part of a pirate willing to carry out a promise to space every last man, woman, and child on a civilian transport if his commands weren't followed made his job easier.

"Get Medived on the line," Jimenez said. "That old bastard owes me money. I'll have his hide and his mine if he doesn't explain all the slip traffic coming through here over the last few days."

"Sure thing, boss," said the sailor at a workstation to his right. Tarka sniffed hard and leaned closer to the fuzzy holo screens in front of her. "Would if I could, but Medived's spot isn't broadcasting on the net."

"Then raise Orlaf." Jimenez shifted in his seat as sweat ran down his back.

"Nobody's online," she said. "No ore tenders, no nothing." The rest of the bridge crew craned their necks toward Tarka's screens.

Jimenez curled his metal fingers into a fist and let it fall onto his chair with a clang, snapping the crew back to their duties. He unbuckled from his chair and leaned next to Tarka.

"Bull," Jimenez said quietly. "The slip lines have been humming for days with ships coming in and out of Sevastopol space. No one's got the balls to lay a finger on Orlaf's claim; he's with the Wyverns. Last time I saw movement like this was when some Cathay admiral decided he wanted his own empire in wild space. This place should be full of refugee ships carrying all their worldly possessions and marketable bodies."

"Radar's clean except for some debris in a decaying orbit over that snowball and comm channels are dead, sir." Tarka tapped a control panel, brought up a feed from the forward cannons, and zoomed onto the planet's surface. Jimenez reached over her shoulder and tapped in coordinates.

The camera shifted and settled on an open wound on the planet's surface. The strip mine was almost a mile wide, surrounded by refineries and ramshackle buildings. Blown snow filled the streets and covered the roofs. Jimenez shifted the view to Olaf's headquarters, which lay in a smoldering heap. The metal spires that once lorded over the city were blasted apart.

"Conn…pull a route from the grav buoy back to Sicani. Get us the hell out of here," Jimenez said as he went back to his seat, walking too fast for anyone to think nothing was amiss.

"Got a radar hit," Tarka said, "but this can't be right. Must be some kind of jamming. Nothing's this big." A track appeared on her holo screens coming around the planet's dark side. Three more came after that, then a flood of unidentified ships, each larger than any warship in wild space.

"Conn?" Jimenez strapped himself in and slapped his metal palm against the armrest.

"Something's coming through slip space right on top of us," the conn officer said. "I can't form a sheath to—"

The star field above the Cabo vanished, replaced by the circular underside of a massive spacecraft.

Jimenez stared at the behemoth, his jaw slack. His crew panicked, screaming orders at each other as their captain remained frozen in shock.

Six energy beams burst from the massive ship and ripped the Cabo apart within seconds.