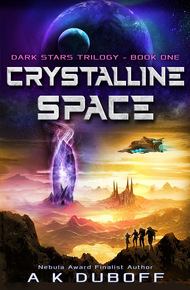 Amy Kay (A.K.) DuBoff has always loved science fiction in all its forms, including books, movies, shows, and games. If it involves outer space, even better! She is an award-winning and USA Today bestselling indie author and screenwriter specializing in space-based science fiction and fantasy. Dubbed the modern "Queen of Space Opera" by her readers, she is most known for her acclaimed Cadicle Universe. Amy's short fiction has been published by NewCon Press, Seventh Seal Press, and in numerous indie publications. When she's not writing, she enjoys travel, wine tasting, binge-watching TV series, and playing epic strategy board games.

Elle awakens on a spaceship. Her body is different, she has new magical abilities, and she's told her civilization's fate is in her hands.

A mysterious Darkness has infected the crystalline network connecting the settled works. The unique properties of the crystals allow reality to be 'reset' to past moments in time, granting second chances. However, the Darkness isn't only threatening the reset process—it's consuming entire planets.

Paired with a diverse team of magically enhanced companions, Elle embarks on an interstellar quest to protect the Hegemony by sealing the Master Archive, the backup for the crystalline network. With only vague clues to guide them, Elle and her new friends must track down ancient relics and unravel hidden secrets before their worlds and loved are lost in shadow forever.

Crystalline Space offers a fun blend of sci-fi and fantasy adventure with a sleek high-tech skin on traditional magic, perfect for fans of Final Fantasy, Kingdom Hearts, and Xenosaga. Begin reading the complete, award-finalist Dark Stars trilogy today and be transported to a universe where second chances are real!

•Meet the Queen of Space Opera! Amy "A.K." DuBoff has a gift for telling space opera stories in ways that feel fresh and classic at the same time. Dig in to the first book in her Dark Stars trilogy, and you'll see what I mean. Amy's unique blend of action, science fiction, and science fantasy brings her work to life in ways that will leave you craving more. It's a good thing she's written so prolifically, giving us Dark Stars, the Cadicle series, and the Mindspace series, plus many stories for anthologies and other projects. Did I mention she was nominated in 2018 as a Nebula finalist for the Andre Norton Award? – Robert Jeschonek

"Huh?" I wanted to say something more articulate, but that was the best I had at the moment.

"Forgive me, this all must come as quite a shock." Commander Colren took a seat at a metal table near the viewport. He gestured to an acrylic chair across from him.

"You could say that." Dumbfounded, I stumbled toward the empty seat. I couldn't stop staring out the viewport at my home planet of Erusan. Was I really in space? I'd seen images and tried to imagine the view from a spaceship, but this… It didn't seem possible.

I took a shaky breath. "How did I get here?"

"None of this makes any sense. What do you mean you have a mission for me? I'm no one."

Colren examined me with his piercing hazel eyes. "Had you recently come into contact with a crystal that exhibited a dark cloud?"

I struggled to think back to the events from a few hours before. "Yeah, I was hanging out with my friends outside of town, doing localized resets. We were just about to do another reset when we noticed it."

"In that moment, you were… altered," he explained.

"It's something like an immunity. You had a brief touch with the Darkness during the reset just prior, so when you encountered it again during the global reset, you were prepared to hang onto your sense of self."

My heart sank. "What about my friends? They touched the infected crystal, too."

"Unfortunately, we can only perform the extraction on one person at a time. You were the fortunate one," Colren replied.

"What about my family? My world?" Fear and worry clouded my mind. My parents, my brother, everyone who meant anything to me was still down there. They couldn't be gone.

The commander took a slow breath. "The world is suspended and its records are preserved in the Master Archive."

"Suspended? What in the stars does that mean?"

"It's a way of locking the records so they don't become corrupted. It's the best we can do once the Darkness infects a planet," he continued. "But you can help us do more."

I barked a nervous laugh. "Yeah. Right!" Either the last reset had messed with my head, or the man across from me was insane. I was leaning toward the former option; people didn't randomly wake up on spaceships. I had to be dreaming.

"Elle, I know this might seem like an elaborate prank, but I assure you it's not. You're special and we need you." The commander looked me square in the eyes—dead serious, as far as I could tell.

I inched back in my chair. "Whatever you think I am, I'm not. I can't help you." The Hegemony needed scientists or heroic soldiers. Not me. As much as I aspired to be a Ranger, I knew it wouldn't happen. I was physically broken—and I certainly wasn't a genius.

The commander folded his hands on the table. "You're exactly who we need."

He nodded. "The young do seem to be the most drawn during the extraction; there's a fearlessness in youth. I'd never discount someone because of age alone."

I still didn't believe any of it was real, but he certainly did. I figured if I heard him out, maybe that would end the insanity; all I wanted was to go back home and finish my summer vacation. I crossed my arms and leaned back in my seat, studying his expression for any tells that might reveal his true intentions. "What is it you want me to do?"

"We are assembling a team of others that have been extracted like you. Together, we hope that you'll be able to help us track down the cause for the spreading Darkness, and stop it. With your immunity, you'll be able to go places others can't."

Articulate speech failed me again. Me, stop the Darkness? Now he was really talking crazy. I laughed and shook my head with disbelief.

"It first appeared three months ago," Colren continued, undeterred. "Initially, we thought it was an isolated anomaly, but when it started to spread, we had to take action. We developed the extraction procedure to give us a means to fight back."

I wanted to dismiss his statements, but I was struck by the gravity of his tone. Maybe this wasn't a nightmare after all. If I really was on a Hegemony spaceship, and if my world was now uninhabitable, as he indicated, I had no idea where I could go.

My heart pounded in my chest. "I still don't understand how I got here. It doesn't seem possible."

"We have certain technology that's not exactly public knowledge," the commander replied. "Frankly, we don't know how it works, but it does."

I raised an eyebrow. "Magic?"

He chuckled. "You joke, but it may as well be."

Crazy or not, the thought of legitimate magic use caught my attention. I leaned forward with my elbows on the table. "What was that test you gave me when I first woke up?"

"The extraction procedure is for consciousness, but your physical manifestation is more fluid based on fragmented data stored in the crystalline network. Those questions were to bring your new body into focus and solidify your innate traits."

It was then that I noticed the long hair hanging down around my shoulders—not the faded pink dye job from minutes before on my homeworld, but bright fuchsia. And it didn't look like dye. "What the—?" I nearly leaped out of my chair.

As I tensed, I noticed that my left shoulder didn't feel tight in the way I was used to. I rolled it and then raised my arm, finding that I had full range of motion.

"Stars, I—" My chest constricted.

"This is you," Colren said. "The real you that you wanted to be."

Colren smiled with compassion. "Think of it like this: pretend your mind is like a digital file that we would back up on one of the central servers. The original computer used to create that file became corrupted. That file has now been downloaded into a new, better computer that was optimized to run that file. Likewise, your new body was bioprinted in that chamber to fit the ideals contained within your consciousness—built to your own specifications."

It still sounded like madness. I ran my fingers through the soft, fuchsia strands. "I guess I did have a few changes in mind."

"Whoever you were before, you still are. Now, you're just a different version of yourself."