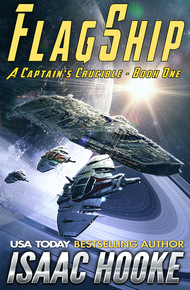 USA Today bestselling author Isaac Hooke holds a degree in engineering physics, though his more unusual inventions remain fictive at this time. He is an avid hiker, cyclist, and photographer who sometimes resides in Edmonton, Alberta

Captain Jonathan Dallas, commodore of Battle Unit 72, investigates the disappearance of a military research vessel on the fringes of known space.

When the unit is ambushed by a threat that endangers not only the fleet but also all of humanity itself, Jonathan must somehow find the resources to fight back.

Cut off from Central Command and faced with impossible odds, can Jonathan overcome his demons to save humanity and, more importantly, can he save himself?

Flagship: where captains are made. Or broken.

•When you think of ways to describe Isaac Hooke, the word "prolific" doesn't begin to cover it. His science fiction series include A Captain's Crucible, Atlas, Star Warrior, Alien War, Argonauts, The Forever Gate, AI Empire, AI Fleet, AI Reborn, Bolt Eaters, and Battle Harem. That's not even counting his Monster Tamer epic fantasies or Ethan Galaal thrillers. Isaac is the epitome of the indie author era, writing as much as he wants across as many genres as he likes—and satisfying countless readers along the way. If he's not an Indie Superstar, I don't know what one looks like. – Robert Jeschonek

A sample from the book that best illustrates the writing style of the book and gives a nice snapshot of the story. Something about the length of a typical prologue will be good:

Captain Jonathan Dallas, commanding officer of the USS Callaway, stared at the video feed projected in the upper right quadrant of his vision.

"Shall I send out another drone to make an exploratory run?" Ensign Tara Lewis asked.

Jonathan zoomed in on the feed. He saw only empty space beyond the edge of the crescent moon. The display momentarily pixelated due to interference from the gas giant's radiation belt.

The Selene had missed its scheduled check-in at 0700 hours. The military research vessel and her escort had been in orbit around the first moon of the fourth planet of the uncharted Vega 951 system, investigating an anomalous thermal signature initially attributed to volcanic activity.

"How long have the two vessels been off the sensor grid?" Jonathan said.

"It's been seven hours since the Selene and the Aegis passed to the dark side," the ensign answered.

"I'm sure they're fine," Commander Robert Cray, his first officer, said from beside him. "You know these scientist types. They get caught up in some fascinating new discovery and lose track of time."

"They're certainly not known for their promptness," Jonathan agreed. "But disobeying a direct order? Captain Chopra better have a damn good excuse. As should Captain Williams."

"The captain of the Aegis won't let them do anything stupid."

"I wouldn't be so sure," Jonathan said. "Captain Chopra is a headstrong woman. What were her exact words when I suggested the escort?"

"I believe she said something along the lines of, 'my crew and I can explore a little backwater moon quite well on our own, thank you.' A little impertinent."

"Just a little." Jonathan glanced at his comm officer. "Lazur, try to raise them again."

Lieutenant Rald Lazur, seated two seats to his left in the command circle, nodded. He was in his fifties. Grey, matted hair. Bulbous nose. A bit on the thick side, which might be expected given that he ran one of the illegal rotgut operations on the Callaway. Jonathan looked the other way from that business of course; he bought more than his fair share of the stuff. Besides, it kept Lazur, a former pugilist, out of trouble in his off hours.

The lieutenant's lips moved but no sound came because of the active noise canceling all stations employed. He unmuted his area with a subtle hand wave.

"Still no response," the lieutenant said. "That repeater is a worthless pile of—" He caught himself and cleared his throat. "It's still not working."

Because the moon's iron core bounced comm signals back at them, a repeater drone had accompanied the Selene and her escort to relay data back to the task unit. The drone had assumed a stationary orbit above the moon at a vantage point that kept both elements of the flotilla in direct line of sight. However, the repeater had ceased functioning a few hours ago, and despite the chief engineer's reassurances that it would start working again, it had remained offline. The planet's radiation was probably to blame.

Another relay drone was perched in high orbit above the gas giant itself, and while that drone still functioned, it was positioned for optimal communication with the remainder of the task group, Task Unit One, whose vessels currently resided near the inner terrestrial planets. The unexplored system was otherwise devoid of any other starships, or life, for that matter.

"Shall I send out another drone to make an exploratory run?" the ensign asked again.

"Do it." Jonathan zoomed out the external video feed. "How long before we have any telemetry data?"

"It'll take the drone at least two hours to make its sweep of the dark side, and another four hours to return within communications range."

"Six hours." Jonathan considered sending a message to Task Unit One to inform the flagship of the situation, but decided by the time the admiral received the message, the Selene and Aegis would have returned. Dispatching the message now would merely look bad.

"If we sent out the Dominion to perform an exploratory run," the first officer offered. "It could get back to us in half the time of a drone." The Dominion was another warship from Task Unit Two.

"No. I want the task unit kept together." Jonathan glanced at the comm officer. "Lazur, inform the rest of the unit to hold positions for now."

Jonathan removed his aReal spectacles and rubbed his eyes. It was good to take a break from the tactical overlay once in a while. He regarded the members of the first watch gathered around him, these men and women who so dutifully followed his orders.

The bridge crew sat in a circle, facing one another at their various duty "stations," which were little more than empty, curved desks. There were no screens or displays anywhere. Nor any control panels. Instead, fingers gestured noiselessly, lips moved silently. To any outside observer, it would appear a bunch of mimes in utility uniforms sat around a circular desk in a windowless, spartan compartment.

A couple of officers wore aReal spectacles, though most had either the contact lens and earpiece versions, or Implants installed directly in their brains. And though they all faced each other, no one really looked at anyone else. Their eyes were focused instead on the projections the devices produced—graphical overlays on their vision that could be shared among other users in the same area, or kept private.

The circle was affectionately known as King Arthur's Round Table by the officers. There was no "Captain's Chair" per se, though Jonathan traditionally sat in the seat facing the main bridge hatch: he liked to be aware of those who passed in and out of the command area. The compartment itself resembled a hollowed-out, squat cylinder, with round bulkheads aligned to a flat overhead and deck. To the right another sealed hatch led to the compartment Jonathan had claimed as his private office.

The bridge was located at the heart of the Callaway, near the CDC—Combat Direction Center—where all tactical and sensor data was processed. The classification of the collected data was mostly automated by the ship's AI, Maxwell, though several specialists babysat the process. The AI's machine learning algorithms had adapted to the information preferences of the captain and his crew, making it rare for the specialists to intervene. Still, Jonathan sometimes worried that the CDC operators were becoming complacent, and that someday an important data packet would slip through unnoticed. It was probably a needless worry, because so far neither Maxwell nor the specialists had ever let him down.

Jonathan replaced his aReal glasses and stood. "Commander, in my office a moment."

A few moments later found Jonathan seated behind the desk of his private office, with the commander standing before him.

Robert was a tall, athletic man of thirty-eight years. His face appeared youthful, though Jonathan doubted he had ever availed himself of any rejuvenation treatments. He had high cheekbones, a square jaw, and thick brows. Women would have called him handsome. Robert wore the contact-lens version of the aReal, with an inconspicuous earpiece sitting over his right lobe.

"The Selene is probably having engine troubles again," Robert said. "I'm sure we'll spot the Aegis towing her past the moon in a couple of hours."

"Ever the optimist," Jonathan said. "But I didn't invite you here to discuss your theories on the disappearance of our research ship." Jonathan folded his hands, forming a steeple with his index fingers. He tapped the two digits together thoughtfully, wondering if now was the proper time to broach the intended subject.

"You've considered my Notice?" Robert said, bringing up the subject for him.

"I have," Jonathan answered noncommittally.

Robert eyed him uncertainly. "And have you come to a decision?"

Jonathan sighed. "I hate to do this, but you leave me no choice Robert. Report to the brig. You are to be tried before a court-martial for attempted mutiny."

Robert raised an eyebrow. For a moment Jonathan thought the man would contest him, but then the commander said: "Very well, Captain."

Jonathan found it hard to keep a straight face. "Consider yourself lucky. I could have had every last one of you executed."

Jonathan finally laughed. It was a good release, given the earlier tension on the bridge. "Doesn't make much sense, does it?"

Robert nodded. "No, Captain, it doesn't. It was a fine joke, though."

"Flattery will get you everywhere." Jonathan leaned back and folded his hands over his chest. "Regarding your notice... I urge you to reconsider, Robert. You're a damn good officer. I'd hate to lose you."

"I've always dreamed of commanding my own ship. This is the opportunity of a lifetime."

"And so it is." Jonathan smiled wistfully. "If it's what you truly want, then consider yourself transferred with my highest recommendation. Of course, I'll expect you to perform your duties to your utmost until we return from our current cruise."

"And if you change your mind in the ten months before we return, then I'll pretend this conversation never happened."

Jonathan doubted the commander would change his mind, of course. Offered the position of captain on the Rampage, newest and most powerful destroyer in the fleet, due to enter service precisely one year from now? Jonathan certainly wouldn't have turned down such an offer himself, especially at Robert's age.

But things were different back when I was his age, weren't they? he thought. Simpler.

Sometimes he wished time travel were real, and that he could flick a switch and revert to an earlier decade. A second chance to live his life and avoid repeating the mistakes of the past.

And yet he would simply make other mistakes, he knew. That was the nature of life.

I have no regrets, he told himself.

Famous people often said those words, but he doubted they actually believed them.