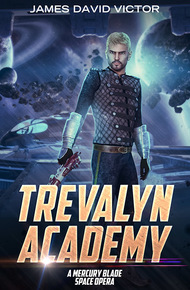 James David Victor's books have sold over 150,000 copies and have accumulated more than 40,000,000 pages read. They have graced the top of numerous Amazon categories, and the Jack Forge, Fleet Marine Boxed Set earned an Amazon All-Star award.

The man, the myth, the scoundrel.

Eliard Martin is the wayward son of House Martin. When an illegal deathrace ends in tragedy, he is blamed and sent to the prestigious military academy, Trevalyn, to learn responsibility and to integrate with the ruling class elite. Instead, he is faced with animosity, corruption, and conspiracies beyond anything he previously knew. Will Eliard stand up and fight for galactic freedom or decide that true freedom must be seized one ship at a time?

Trevalyn Academy is a standalone story in the Mercury Blade Space Opera series. If you like fast paced space adventure, Captain Eliard Martin is the kind of rogue that will keep you entertained for hours.

•What do you get when you combine Dave and Shannon VanBergen? The science fiction author known as James David Victor, whose books have garnered more than 40,000,000 page reads. Dave and Shannon have made quite a name for themselves as James, penning such smash hit series as Outcast Marines, Space Shifter Chronicles, Jack Forge: Space Marine, Valyien, Raven Sharpe Chronicles, and The Deep Black. Their successful collaboration is inspiring, and their contribution to the bundle is a great introduction to their bestselling Mercury Blade series. I can't recommend them strongly enough. – Robert Jeschonek

Smoke smeared the already-disturbed skies of Branton 1, which should have been a deep cerulean blue at this point of late summer, kissed only by the long-winged Brant Gulls that flew in wakes and clouds across this peaceful planet.

It should have been peaceful, but it wasn't. The dry, Mediterranean hills with their occasional strands of spikey-leafed trees were now littered with disaster. Underneath an orange rocky canyon wall was a mess of blackened metal still smoking and still sparking strange, electric purple flashes of light. It was hard to tell where one of the crafts ended and another began, as the light metal frames had been designed for speed, not safety.

The skies above still held the ether trails of the racing craft that had already passed their downed colleagues. One of the competitors had at least had the decency to release a blue-smoked flare, which was even now falling on its wobbly path to earth.

The young man watched the fizzing drop of the blue canister from where he lay on his back, his body feeling curiously distant to where it should be, here, now, and surrounded by imminent death.

I survived. I drekking survived, Eliard Martin thought, and wondered why. He was a young man barely at the end of his teen years, with hair that was too ragged to please his father, the lord general. He wore the orange and blue buccaneer's jacket with the brass buttons that he had bought from one of the Off-World Markets because it made him feel strong and daring.

But Eliard didn't feel very strong or daring at the moment.

Burnt air, he thought, his nose registering the rising scent. For a second, the rest of him, surrounded by peeled and bent metal, didn't recognize the significance of that—until it did.

Burnt air. Acrid and bitter but laced with ozone. It was the unmistakable scent of a core leak.

The sort of cores that both he and the other craft used to power their racers: souped-up, over-clocked single core cylinders from the heavier dual-core spacecrafts that traveled all the time between Branton 1 and the other near planets of the Imperial Coalition. The racers were meant to run on atmospheric engines, which were little better than solid-fuel boosters, but the racers of Branton had long ago found out that you could fit one of the dual warp cores into the racers and use it to power the propulsion. Just so long as you blocked off the actual jump mechanism, then you'd be alright. No chance of performing a warp-space jump inside the thin envelope of planetary atmosphere and creating a localized thermonuclear device. As such, it left all of that potential energy with nothing to do apart from feed the racer's rockets.

No chance of explosion, that is, unless it was breached.

The young Eliard Martin knew enough about astro-engineering to know that the bitter-ozone smell he was getting hit with wasn't actually the smell of warp plasma. No, if there actually was a warp plasma leak, there would already have been a massive explosion—enough to clear out a kilometer in every direction, perhaps. But the burnt air smell instead came from the coolant mixture that surrounded the warp core. Even if that was leaking, it was still bad news.

Fear lent a new kind of strength to Eliard's thin and athletic form, as he somehow managed to crawl out of the wreckage and stumble, his boots burnt and scratched, over the short grasses and orange sandstone, away from the canyon wall and down the hill. He got about ten meters away when he tripped and fell, rolling over the rough earth to slide to the bottom of the dried-up creek bed.

He wasn't far enough. The blast would still kill him. There was the out-flung evidence of the crash still thick on the sands around him in strange and deformed bits of blackened metal fragments, sitting in their own tiny impact craters of scorched earth.

But Eliard was tired, and everything hurt. He tried to push himself up once more and managed to crawl about three meters before his arms gave out. Maybe he should have worn that helmet like the other racers wore. But it had been more weight, and he had managed to get himself into the lead. Would they keep his final position when the race was canceled?

And then the young man realized that he was going to die anyway, so what good would it do him if he did remain in pole position? The world was starting to all go a bit fuzzy and out of focus for him. Eliard wondered if he had been poisoned by the coolant leak, or maybe he had hit his head in the crash?

I must be injured, he thought, because he could hear the rising whine of something, blotting out the hisses and pops of the still-burning metal. A buzzing in his ears that was growing louder and threatening to drown out all thought.

Looks like I didn't survive after all, he thought as his world slowly started to fade into black. He was sad about that, of course, but considering the horror of being blown apart by the explosion, or of the sheer amount of trouble he was going to be in if he survived, Eliard Martin could almost see an upside to being dead.