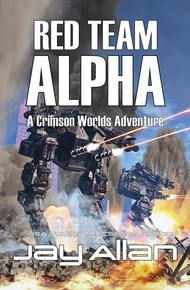 Jay Allan is a former investor and the author of the Crimson Worlds, Blood on the Stars, and Far Stars series. His books are typically written with a nod toward plausible physics and science…but he is not above putting a sword in the hero's hand upon occasion.

When not writing, he enjoys traveling, running, hiking, and reading. He loves hearing from readers and always answers emails. He lives in New Jersey.

Jay has been fortunate enough to produce many best selling books, and he is currently finishing up the first book in a new series.

Red Team Alpha. An elite military unit. Twenty highly-trained veteran warriors, Mars' best. They are ready to face whatever dangers threaten the Confederation. They are capable, dedicated, armed with the best technology Mars has to offer. And they don't exist, at least not officially.

Now the team will be called upon to face its greatest test. On a planet in a newly-discovered system there is a mysterious wreck, the remains of an ancient ship. The discovery is a momentous one, first contact and proof that mankind is not alone in the universe. It is a job for the Team, but even these crack soldiers will be tested to the limit of their abilities as they uncover the dark horror within, a technological nightmare that threatens the very future of humanity. The soldiers of Alpha will fight, ignoring the odds as usual, but this time they will be caught between two enemies.

For they are not the only ones who know about the ruins. Even as they prepare for the deadly mission, the notorious Gavin Stark and his Alliance Intelligence forces are on the move, seeking to seize the ancient vessel and the priceless technology within for their own purposes. And they are ready to do whatever is necessary to gain the priceless ship…including wiping out Red Team Alpha completely.

•If you're looking for two-fisted military science fiction that won't let go until you've finished reading the entire series, Jay Allan is your new favorite author. His Crimson Worlds and Blood on the Stars series set a high bar for the military SF genre, presenting high tech yet gritty battles between fleets and warriors who fulfill their destinies in blazes of glory. Inviting Jay to add his work to this bundle was never in doubt, as he most certainly fits the definition of indie publishing superstar. Red Team Alpha is the perfect introduction to his universe of non-stop action, personal sacrifice, and redemption. – Robert Jeschonek

Roderick Vance stared at the intelligence report. He was sitting in the study—his father's study—reviewing the pile of work that had fallen on him. The room was dark, lit only by the flickering light of his workstation's screen and the dying embers of the untended fire in the hearth behind him.

It had been barely a month since he'd gotten the call in the middle of the night telling him his parents where dead…just over thirty Martian days since he'd inherited the responsibility for one of Mars' largest conglomerates, a sprawling enterprise involved in trading, manufacturing, and finance. One that employed thousands and accounted for just over two percent of the Confederation's GDP. It was overwhelming, but right now it was the least of his concerns.

His father had bequeathed another job to his only son, a position far less public than the other, one that had been held by a Vance since the early days of the Martian Confederation. Roderick's father had spoken to him only a few times about his role as the director of Martian Intelligence, and he'd done almost nothing to prepare the younger Vance for a job he hadn't been expected his son to fill for several decades.

The Council had almost selected another director, fearful that Vance was too young, too unprepared. But Roderick felt the call of family obligation, and he resolved to follow in his father's footsteps. He began his new career by teaching himself a central tenet of his new craft…lying. He stood before the Council, assuring them with unchallenged sincerity that his father had schooled him in espionage since he'd been a child. It was a wild bluff, and he held his ground, hiding his nerves, completely unprepared to answer any incisive questions. But Martian society was based heavily on tradition, and a Vance had always run Martian Intelligence. Roderick's confidence, the stone cold nature of his performance, had silenced his doubters. There had been no questions, none at all. He'd been confirmed in his new role almost at once, the necessary security clearances approved moments before he was sworn into the job.

Now he faced his first great challenge. The report displayed on his glowing tablet was disturbing to say the least, even stunning…but it was not conclusive. It would be a few days before he had more information…a period he was sure would seem like the longest of his life. If the find was what it appeared to be, it was impossible to overstate its importance…to the Martian Intelligence, to the Confederation, even to history itself. Things would never be the same again.

If he did get the confirmation, he knew he had to move quickly…and quietly too. There was no time to spare. It appeared that the precious information had already leaked. One of his agents was on the detention level even now, suspected of passing the news to Alliance Intelligence. Vance wasn't sure, but he knew finding out would be another baptism of his new job. He'd trembled slightly as he signed the order authorizing level one enhanced interrogation on the suspect, but he knew there was no choice. He simply had to know for certain if the news had been divulged. And, if he'd ordered the torture of an innocent man, of a loyal agent, the part of him that was already older in spirit than his years realized that, too, was part of the job, as was living with the guilt from his actions.

He put such thoughts out of his mind. He had to decide what to do, how to inspect the mysterious site, and how to get there first. His first urge was to mobilize the fleet, to send every bit of force he could scrape up. But he knew that wasn't possible. A massive operation would destroy whatever secrecy remained. No, he couldn't mount a large expedition. A small group could move faster, maintain tighter secrecy. He wasn't comfortable yet with all the various specialized assets and resources available to the head of Mars intelligence, but he knew of one, small but also the very best. A secret force, operating under the direct command of the intelligence chief. A unit with an unbroken record of success Twenty men and women—warriors, veterans, killers.