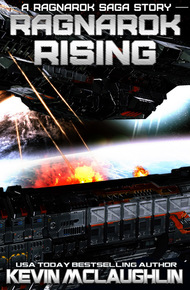 Kevin McLaughlin is a multiple USA Today bestselling author of science fiction and fantasy novels, with over eighty books published. He believes in giving back to the writing community that helped him out during the early days of his career, so he uses his experience to boost others. He has been a speaker at Boskone, Dragon Con, the Nebula Conference, 20Books London, and many other events. A skilled public speaker with experience in education, McLaughlin sees it as both pleasure and obligation to pass along to others the skills he has learned, so that the chain of people helping people continues unbroken.

Kim's attained her dream job, but it wasn't what she was hoping.

Commanding a spaceship ought to have been the pinnacle of her career, but all she could do was hope her next assignment would be more interesting. Boring picket duty at the edge of Earth's solar system wasn't what she had in mind when she signed up. She wanted to explore space, to meet the myriad life that the galaxy was teeming with. More than anything else she was hoping for a little excitement.

Be careful what you wish for!

Bran had just seen his homeworld destroyed, his entire people wiped out by the alien scourge his people called the Skree. His damaged ship arrived too late to fling itself into the battle. All he and his men could do was watch helplessly as everyone they knew died.

He'd ordered the ship to jump away, fleeing in shame and desperation. The Cymtarran Empire was no more. Hell, the continuation of the Cymtarran race was in question. Vengeance was the last thing he and his crew had left to them. They ran to a backwater system, hoping to evade pursuit long enough to repair their warship and avenge their fallen.

But the Skree were more cunning than he had given them credit for. They followed Bran's ship. They've arrived at Earth, and unless Kim and Bran can find a way for their people to bond together, Kim's homeworld will be the next planet they destroy.

•If you've ever read a book in the bestselling Starship Satori series, you know Kevin and his work. A real power-hitter, he writes extensively in the science fiction and fantasy genres, not to mention the many other hats he wears as an editor, cover designer, and member of the 20BooksTo50K group. After spending time with Kevin at the 20Books meetup in Pittsburgh and again at 20Books Vegas, I've wanted to feature his genius in this bundle. He has a one-of-a-kind voice and a real gift for telling exciting tales in scifi and fantasy settings. Ragnarok Rising is the perfect introduction to his Ragnarok Saga series of thrilling space opera novels. – Robert Jeschonek

An explosion rocked the corridor.

"Shit," I said. Then I did the completely illogical thing and started running toward the sound instead of away from it.

Why was I doing that? I still didn't know. I owed nothing to these aliens. But there was trouble, and I couldn't just stand around and hide. Besides, they were at least willing to talk. Who knew if their enemy would be as reasonable? The enemy of my enemy and all that.

I rounded the corner into a scene of carnage.

The first thing I saw were the giant bugs. They stood as tall as a horse, gleaming with a chrome-like metallic finish. Armor or skin, I wasn't sure which, but it sure looked like they were made of metal. Each had four legs that ended in stabbing tips. They were easily the most horrible things I'd ever seen, made even worse by the splashes of red blood on their shining mandibles.

Standing opposed to them was a small group of Cymtarrans. Their gold armor stood out against the chrome bugs. Some of the Cymtarrans had engaged the bugs in sword to claw combat, while others lay down suppressive fire with weapons similar to the one I'd grabbed. One of them was a little too slow blocking a blow from a bug, and got impaled on its claw. The Cymtarrans next to him sliced down at the limb and chopped it off the bug, while another Cymtarran with a rifle blasted the bug.

The guys in gold were winning, but the victory was coming at a cost.