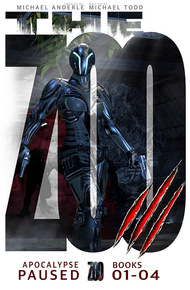 Michael Todd is a pseudonym for Michael Anderle (ok, it's weird talking about myself in the 3rd person) (1967-Hopefully a long time from NOW). Michael was born in Houston, Tx. A very curious child, he got into trouble - a lot. What to do with an inquisitive mind when he was grounded? Read!

WHEREVER YOU LOOK, LIFE AND DEATH STARE YOU IN THE FACE.

Born from the fertile imagination of bestselling author Michael Anderle

Read the first four books in the bestselling Apocalypse Paused series at a discounted bundle price!

Fight for Life and Death

Fountain of Youth, or Valley of Death?

One missile fired at Earth. One political decision could change the future of mankind when apocalypse happened.

Now, we have the future of mankind growing in the Sahara Desert, and we need hard, smart people to pull out the secrets.

So what did the military want with Dr. Christopher Lin?

By the time his helicopter ride was on the ground, he wasn't a ZOO virgin any longer.

The government needs the best of the best military and scientific minds working out how to pull the secrets from the ZOO, while keeping the deadly fauna and flora in check.

There is one major problem, the ZOO is transforming too quickly, and they didn't even have the basic information from the Bio-Domes on what went wrong.

•Is there such a thing as a king of indie authors? If so, Michael Anderle (Michael Todd is his pen name) is surely in the running for the title. As the creator and author of The Kurtherian Gambit series, he has brought a unique voice and in-your-face style to indie science fiction and fantasy. As the founder of LMBPN Publishing, he has propelled numerous indie authors into stratospheric success and launched dozens of books that have made a major impact on the publishing industry. On top of all that, he's one of the founders of the 20BooksTo50K group and a generous person who's willing to provide guidance and support when possible. I first met him through the 20Books group, chatting over the phone and then in person at the 20Books meetup in Pittsburgh, and he could not have been more gracious and informative. Including a boxed set of books from his Zoo series puts this bundle over the top, providing a showcase for a true indie superstar who has made it a point to stay ahead of his time. – Robert Jeschonek

She had to keep running.

The sounds of death were fainter now, and she fell against a tree and gasped for air. Its trunk was as green as its leaves and slick with greenish sap. For all its height, it was a young plant compared to its nigh-infinite number of siblings. This emerald hell was at once unnatural and hyper-natural. She had never seen anything like it. But she couldn't reflect on that now and rather needed to breathe and rest. She heaved and sobbed in the enveloping shadows, careless of the rips and stains that marred her once-white lab coat.

The sound rose behind her again, little more than a rushing breeze through the jungle. But a familiar buzz carried beneath it and with that sound came fear, for this wind was armed. Branches snapped, limbs cracked, and thick leaves burst and shredded as they were rent apart.

Dr. Marie took one last gasping breath. She knew what she had to do and sent the order to every limb in her body.

Something crashed overhead and sailed through the canopy. She didn't pause to consider it. Her feet churned the earth as she ran as far from the base as they would carry her. Panic sharpened her senses but reduced her ability to reason. Sticks, vines, and thorns tore at every part of her they could touch. Squirming creatures wriggled underfoot from time to time and threatened to send her sprawling. Her lungs felt close to bursting. But that would be a merciful way to go, all things considered. It was better than what her colleagues had suffered.

Still, she pressed on through this Garden of Good and Evil she had helped to create. She had believed in what they were doing here, that Earth itself could be transformed and saved by humankind from the very ailments humans had inflicted upon it. The decades of pollution and overdevelopment, the ravages of wars and nuclear tests, the destruction of countless habitats… All might be reversed. All because, strangely enough, of a weapon. A weapon that, ironically, gave life instead of taking it.

But now this had happened.

The trees thinned ahead and the noise was no stronger than it had been, despite one of them flying past while she rested. She'd managed to keep ahead of them. Gaps appeared in the foliage. Streaks of pale tan and bright blue pierced the endless green. She would make it.

She'd barely accepted the truth of that when the jungle ended. Her ripped and dirty shoes stood upon new ground. Sand and rock stretched for miles in either direction and the sky was neon-blue and cloudless. There were no plants and no animals. No water and no life.

"Thank God," Dr. Marie gasped. She sank to her knees in the hot barren earth, spread her arms wide to the desert, and closed her eyes against the blinding sun. "Thank God…"

She took a moment to revel in her freedom. The rushing, buzzing sound was still audible, but she doubted they would risk the open desert. It was not their habitat. There was nothing there for them to survive on. The sun's intense rays lessened and she opened her eyes in confusion. There hadn't been so much as a cloud before, but now…

The sky had gone dark.

Millions of tiny forms rose over the shelf of rock on the horizon, and with them came another that grew to a deafening roar. The enormous cloud couldn't be disputed. But as it drew closer, she saw how it writhed and tattered as the drone became almost unbearable. Dr. Marie's face paled with horror. Insects. A horde—no a plague—headed directly for the jungle.

She turned and screamed. A surge of green flowed between the trees and under the brush, like a school of piranhas swimming through the air into the waterless wastes beyond. There would be no high ground, no means of escape. The wave broke over her and continued to surge. Her screams were drowned by the incessant hum until that was all that remained. Doctor Marie was no more. Her warning died with her.