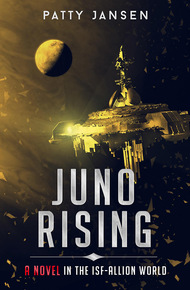 A prisoner, a secret he can't remember, and the military force that will destroy planets to get their hands on it.

When Fabio Velazquez arrives on the secretive military base on Jupiter's moon Io, he knows two things: one, that he's had his memories erased and two, that he has a secret. Except because of point one, he can't remember what point two is.

The portents aren't good: he's hated by his fellow soldiers, responsible for "the greatest f***-up in military history," traitor and human guinea pig. Yet, he managed to be trusted with a secret so big that the military has almost killed him and still haven't gotten their hands on it. Where is it, and who does it belong to?

His nickname might be Escape Artist, but in the hostile environment of Io there is no escaping punishment. Or so the military thinks, but they're not the only ones interested in him.

A secret base lurks in the cloud tops of Jupiter. They watch. They wait. They will strike.

•Writing great science fiction and writing great fantasy are two very different disciplines…and Patty Jansen has mastered them both equally well. On the scifi side, her excellent Ambassador series has quite a following, as do her ISF-Allion and Space Agent Jonathan Bartell series. Meanwhile, her Dragonspeaker Chronicles and Moonfire series are bright lights on the fantasy side. Her work stands out for its high quality in a crowded field, introducing readers to fantastic realms that could only have been dreamed up by someone from Down Under. This Australian indie powerhouse added a crucial international element to the Indie Superstar bundle, bringing yet another unique shade to the palette of our colorful cast of authors. – Robert Jeschonek

"MEDICAL," SAID THE OFFICER with the name tag Private First Class L. Manning. He stopped in the grey and featureless corridor at the door of a room that wafted smells of antiseptic and where, out of the line of vision, someone moved with soft footsteps and rummaged in plastic wrappings.

Fabio's courage sank, then, deep into a place he didn't want to be, a place where he was lying face down on a hard and cold bench and a nurse was shaving his head. Locks of hair tickled over his face on the way down to making black curly snow on the table, leaving an itchy trail on his face. All he could do was blow them away because his hands were strapped to the table; a drip was in one arm, and sensors were stuck to his head, which were attached to beeping machines. A thin tube fed into the drip through which, at the press of a button, the surgeons would administer the anaesthetic to knock him unconscious. The doctors weren't quite doing that yet; they were talking to each other in low voices, a mush of mumbled conversation with medical words like cranial lobe and neuro-reflexes.

He was back in the grey and scuffed corridor at the ground floor of Calico Base, on Io, being shown around by a fresh-faced Private First Class with the name tag that said Manning, who had met him when he came out of the transport tube and who was still talking, ". . . anyway, it's nothing special, just the regular tests. A few months ago, a guy came over from Ganymede and brought chicken pox. The whole base went down with it . . ." He laughed, and the laughter sounded muffled in the woolly space inside Fabio's head. The recent scar at the back of his head itched. He took a breath of the static-dry, sulphur-laced air, and another. The air flowed into his lungs, then, as if he'd forgotten to breathe.

There were no such things as innocent medicals. There was nothing regular about having a blood test. Not for him, ever.

A few troops in dark green Space Corps fatigues sat on plastic chairs outside the entrance of the room, wordlessly staring at him. Two privates, a private first class and a sergeant.

Fabio recognised some of them because they had been with him on the transport, a short-range in-system barge that ferried people from the Galilean sling to various points in the Jupiter system. Hard to miss each other when you're sardined into a tin can for eight hours. Judging by the discussions he had overheard on the transport, they were base relief staff and most seemed to have been sent here as punishment for some sort of transgression.

A private with a shaven head nodded at Fabio and raised an eyebrow at Manning. Curiosity oozed off him. Look, who's this geezer that he requires a personal minder? What's with the non-standard uniform? Is he crazy or dangerous?

Manning sat down and Fabio took the chair to the right of him. He stared at the open door to the medical room, where he could only see shelves full of jars and part of a workbench.

He heard voices in the room and wondered what was happening inside. Doctors with vicious needles. Nurses with jars and vials. Those worried him, because those were for collecting things that weren't theirs to collect. He jammed his hands under his legs, but his right leg wanted to jiggle. He clamped his jaws to suppress the jiggling—

"Hey, you're new, too, aren't you?" The voice from his right was young and female.

The woman jerked back, her expression startled and defensive. She looked quite young, dark-skinned with big brown eyes and glossy black hair in a bun. "Whoa, mate. I didn't want to offend you. I thought . . . I saw you on the transport. I was sitting on the bench against the opposite wall. I thought you were new . . . because you looked like it was your first trip out, with the Sarajevo tag and all that . . ." Her gaze went to the chest of his uniform, where he wore a badge with three tiny embroidered stars. It was a shirt that ISF used for Earth-based recruits. It had been given to him on the transport, and he had no idea whether this meant that he'd been demoted or that they didn't have gear appropriate to his rank.

"Um, yeah." He stared at the opposite wall, grey with scuff marks. "Yeah, I'm new." He was hoping she'd shut up. He did not want to talk and be reminded of the vast areas of blackness inside his head. He did not want to be here. He did not want a medical. He was supposed to work for some Major called K. Doric and he wanted to ask Manning when he was going to meet this person—

"Hey, I'm new, too. Got transferred from Europa. Where did you come from?"

He met the woman's eyes again. Where did he come from? The question twigged nagging unease. Jumbled memories exploded into confusion, closely followed by rage. "Where did I come from? Does it matter where I come from?"

Her eyes widened. "Sorry, I was only asking." She looked away and leaned to the side, away from him.

Fabio took deep breaths and resumed clamping his jaws to keep from jiggling his leg, but the nerves took over and he jiggled anyway. His knees were shaking with it.

A memory came to him.

He was on his stomach on a bed in the hospital. He could tell he was on a ship because the mattress under him vibrated. There was no one in the room and when he lifted his head, a sharp pain speared through his neck. He wanted to scream, but his throat was too dry. He coughed and that made the pain worse. But he couldn't stop coughing because his throat tickled. He couldn't breathe. The door opened and a nurse ran in.

He wanted to scream, I can't breathe, but he couldn't.

He wanted to ask, Where am I? but he couldn't.

He wanted to know where the ship was going, and what he was doing here, and who had put him here, but he coughed and coughed until blackness encroached on his vision, and someone in the echoing cavern of darkness said, "Keep the sedative up."

That, he remembered. But where he came from? No, that information was lost in the depths of his mind.