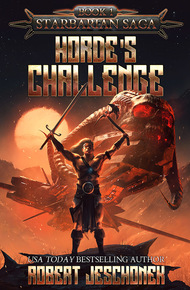 Barbarian hordes rule the fallen and desolate world of tomorrow. Horde lords Tork and Angar battle for control of what's left—until the high-tech Blacksmiths whisk them away to fight a war for survival among the stars. The barbarians' killer instincts and murderous skills are the last hope of defeating the conquering Caul—but can Tork and Angar stop trying to kill each other long enough to save the last remnants of humanity from extinction? Even if they rise to the challenge, will they bring a new nightmare to life that will transform the galaxy into a living hell? Only one thing is certain: underestimating the power of the Starbarian Lords is the kind of mistake that can change a universe forever.

•Robert Jeschonek – I've been having the time of my life penning my new series, Starbarian Saga, and am dying to share it with the world…but as of this writing, only the first book is finished. What better way to launch my first StoryBundle as curator and make it extra-special than to include that first book in the set as a StoryBundle exclusive? If you're lucky enough to order this bundle before you run out of time, you'll be among the first readers in the world to leap into the adventures of Tork Gallgore and Angar Crux, barbarians from a ruined Earth who are catapulted into an all-out war for the survival of all life in the Milky Way Galaxy. – Robert Jeschonek

Lightning flashed as the two blood-streaked broadswords crashed together, their razor-sharp blades gleaming in the blaze of light igniting the night sky.

Thunder followed, mixing with the roars of the two heavily-muscled men fighting for supremacy in the heart of the storm. One pushed his sword forward, forcing the other's sword back—and then the other did the same, finding the strength to drive his opponent's weapon in the other direction.

They went at it like this for thrust after thrust, sweat-soaked muscles bunching and flexing in perfect balance. The men were too evenly matched for either one to seize victory and kill the other, though clearly, they were straining to do just that.

Their armies were doing exactly the same thing. On the muddy plain around them, their respective forces battled like maniacs, roaring and slashing and bludgeoning with a fervor that was at least the equal of the power of the storm that swirled around them. In their horned helmets, leather tunics, jagged spikes, and gleaming chains, they fought like the barbarians they were, the supreme warriors of a world that had long ago abandoned any pretense of civilization.

A world that was not now called anything at all, its once-proud name lost in the distant reaches of history.

Again, the two men in the middle of the battle—the leaders of those armies—swung their swords together with crushing force. Again, the lightning flashed, and again, neither man could claim a decisive advantage. They both let loose roars of rage to the highest heavens, as if by that noise, one could somehow gain superiority over the other.

But the noise was not enough. The deadlock continued.

The opposing armies hacked away at each other, mowing down man after man and woman after woman—yet their numbers remained roughly the same. The two leaders swung and slashed their mighty swords, yet always they stayed on their feet and held their ground.

This test of wills and power was not going to end anytime soon...barring the unexpected.

"Surrender!" Angar, the black-haired leader with the spiky silver helmet bound in black leather straps, hissed the word between clenched teeth. "Your so-called warriors are gutted and broken."

"Your wretched weaklings are the ones dropping like flies." The second leader unleashed a flurry of moves that should have cut down his enemy in seconds...but he dodged every one of them. His helmet, which was topped with a winged, screaming skull, seemed to swoop right and left as he ducked and sidestepped, his shoulder-length blond hair flying. "Soon, the horde of Tork Gilgor will rule this land and plunder all its treasures!"

"Not while Angar Crux still lives to fight!" With a sudden feint and sweep of his head, Angar slashed with his helmet spikes at Tork's throat. But he missed when Tork flung around his sword and smashed the helmet aside.

Lightning flashed just as Tork slammed Angar down to the muck, sending his sword flying. Before the thunder followed, a downpour of rain suddenly burst from the clouds, drenching the plain in all directions.

Just as Tork raised his broadsword, ready to plunge it into his opponent's chest, Angar lunged at him, knocking him back. This time, it was Tork's sword that flew as the two men dropped, wrestling desperately in the mud.

Rain continued to blast them as they fought, rolling and twisting and clawing to the sounds of screams and clanging weapons all around them. Every blow felt like a death blow, every hold felt like the end—yet Angar and Tork struggled on, too evenly matched for the tide to turn one way or the other.

Angar's answer was to gather all his strength and flip his opponent down brutally, then grab a nearby rock and raise it high. "You deserve doom! You deserve the torture and terror you've given so many helpless people!"

With a furious curse, Tork grabbed Angar's arm and kept it from swinging down at his head with the rock. He forced it back suddenly, aimed right at Angar's head, intending to smash it to a bloody pulp.

The rock shook as both men jockeyed for control. Again, they were deadlocked, trapped in a stalemate, unable to break the balance and push everything one way or the other.

Then, suddenly, they were bathed in a bright red flare. Their struggle didn't end, but they both turned their gazes up into the flickering light.

This time, it had nothing to do with lightning. What they saw hovering over them was the figure of a man robed in bright yellow flame. Seemingly unaffected by the pouring rain, he stared down at them with flashing, burning eyes. Somehow, he was not consumed by the fire, though it engulfed him entirely except for his bronzed face, hands, and feet.

Because they had met his kind before, the men knew exactly what he was, though his reasons for being there escaped them both. That in itself wasn't unusual...though he didn't keep them guessing for long.

"ANGAR CRUX! TORK GALLGORE!" The fire-robed man's voice boomed louder than the thunder, making his words heard all across the plain and beyond. "HOW MANY TIMES HAS IT BEEN?"

For once, Angar and Tork's gazes met without hostile intent. They scowled, wondering what the burning man meant and what he wanted.

"ONE HUNDRED? ONE THOUSAND?" The fire-cloaked man spread his arms wide, releasing sparks and ashes to swirl up into the sky. "HOW MANY TIMES HAVE YOU TRIED AND FAILED TO DESTROY EACH OTHER?"

"I will not fail this time!" snapped Angar, clenching his teeth and pushing the rock harder toward Tork. "By the searing winds of Kromathon, I swear I will annihilate him this time!"

"SWEAR ALL YOU LIKE, BUT WE BOTH KNOW THE TRUTH!" The Blacksmith raised his arms higher, and his flames flared brighter. "NEITHER OF YOU CAN WIN AGAINST THE OTHER! YOUR ENDLESS WAR IS HOPELESS!"

"What do you know, Blacksmith?" said Angar. "When did you last win a war?"

"THIS MORNING!" roared the Blacksmith.

As the echoes of his voice died down, so too did the cacophony of battle on the plain. The clanging of iron and howls of rage and pain faded; Tork and Angar suddenly realized that all their fighters were listening closely to every word from the burning man.

"BELIEVE ME WHEN I SAY, I CAN HELP ONE OF YOU WIN YOUR WAR, TOO."

"How?" Angar and Tork said in unison.

"A CONTEST. TOMORROW." The Blacksmith's flaming cloak rippled in the wind and rain but never went out. "THE WINNER WILL RECEIVE A MYSTICAL WEAPON THAT WILL FINALLY BREAK THIS IMPASSE."

"THE WINNER WILL BE UNSTOPPABLE," said the Blacksmith. "THE LOSER WILL BE DEAD."

Angar and Tork's eyes widened, never doubting it could be so. The Blacksmiths had a long history of using their magic to perform the impossible.

But the details of the contest were still important. "Tell us more about this contest and weapon," said Tork. "How will they both work?"

"YOU HAVE UNTIL SUNRISE TOMORROW TO ACCEPT," said the Blacksmith. "THAT IS ALL YOU NEED TO KNOW."

"TELL A FIRE," said the Blacksmith. "WE WILL KNOW."

With that, he suddenly spun and disappeared in a whirl of flaming tongues. Glowing yellow embers swam away from the spot where he'd been, hissing out in the drenching downpour and falling as sodden ashes to the mud.

Angar and Tork looked at each other, then looked around at their waiting armies. If they had until sunrise to accept the challenge, that still left ample time to finish the battle, didn't it?

Before they could say a word, however, a vortex of flame whipped to life in the air above them, becoming the very Blacksmith who'd disappeared moments ago.

"AND SHUT DOWN THIS BATTLE WHILE YOU'RE AT IT," he said, "OR THE DEAL'S OFF."

Tork sighed. "You heard him!" he shouted at the top of his lungs. "The battle's over!"

Without argument or hesitation, everyone on the plain lowered their weapons and stepped away from whatever mayhem they'd been about to resume.

"SUNRISE TOMORROW!" said the Blacksmith. "AND IF EITHER ONE OF YOU BACKS OUT, THE OTHER ONE AUTOMATICALLY GETS THE WEAPON!"

Then, in another flurry of flame, the Blacksmith was gone again. Lightning flashed when he disappeared, as if it had been somehow triggered by his passage.

For a moment after that, Angar and Tork remained locked together as before, the rock still raised between them. One gave it a token push, then the other.

And then both slowly lowered it to the muddy ground.

"I don't like this," said Angar as he slowly got to his feet. "I hate Blacksmiths and their stinking deals."

Tork shrugged as he also stood. "But imagine the reward if it works out. One of us finally triumphs over the other."

"Sure, but I keep thinking." Angar retrieved his broadsword from the muck and swung it in a skillful figure-eight. "What does he get out of it?"

Angar nodded. "Why is that bastard making this offer to us hordesmen?"

"Does it matter?" said Tork.

"It might." Angar slid his sword into the sheath on his back. "Neither of us can possibly say no, can we?"

"I don't know." Tork thought for a moment. "It seems like a cowardly way to destroy you, doesn't it?"

"If it means final revenge for your crimes?" Angar curled his lip in a hateful sneer. "Any way would make me feel good."

"Assuming the Blacksmith is true to his word." Tork retrieved his own sword and wiped the mud from the blade on his tunic. "Think about it."

"Why would a Blacksmith give either of us a weapon with the power to destroy?"

Angar snorted. "Remind me to ask him after I'm done slaughtering you with it."

"You will die first, scum!" shouted Tork, and then he whipped around and marched off across the rain-swept plain, storming through the darkness like a leviathan diving into the deep.