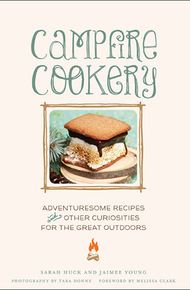 Sarah Huck and Jaimee Young have acted as recipe testers and developers on many cookbooks including Paula Deen’s The Deen Family Cookbook. They live in Brooklyn, New York.

Camping fare typically includes burgers and hot dogs, and while these are certainly easy, get ready to rethink the cuisine that can be savored over the open flame. With recipes like Spiced Currant Cream Scones, Maple-Glazed Wild Salmon, and Tomato Tarte Tatin, Huck and Young celebrate delicious food and the great outdoors. They also include step-by-step instructions for activities such as stargazing, foraging for woodland berries, and minding one’s fruits of the sea (or, how to clean a fish). Campfire Cookery proves that the campfire cannot only be a blissful escape but a true culinary destination.

No one in her right midn would embark upon the adventures we have set forth in this tome.

But sometimes life's greatest adventures are a teensy bit practical and a whole lot fantastic. When asked why he decided to climb Mount Everest, the English expeditionist George Mallory is said to have replied, "Because it's there." His heroic feat was not time-saving, money-saving, or prudent; it was an act of free-spirited derring-do. It was the stuff of legends. And as all heroes know, creating something legendary is as simple as setting out to do it.

Which is why we knew if we were going to conquer the natural world, we'd have to do it with a skillet in our hands—because we're not the sort to go exploring on an empty stomach. Truth be told, our batterie de cuisine may have contained more than one skillet. It may even have contained more than one bottle of French Champagne (but not more than three; we were roughing it, after all). Frankly, we've never understood why outdoor holidays inspire austerity when nature itself is not austere—the panoply of stars, the patchwork of flowering meadows, the abundance of babbling brooks perfect for skinny-dipping. To our palates, this beauty is sheer inspiration for the dinner plate. We can think of no better way to pass our leisure hours than frolicking about the wilderness in pursuit of culinary delights that dazzle, food that is as much fun to prepare as it is extravagant to feast upon.

We hope this book emboldens one to embark on a premiere flight of fancy, where gastronomy and adventure intertwine in a most unexpected setting. For whether a cook makes one dish or one and twenty, this story is a fantastical romp: here is what one can accomplish when the culinary ideals of modern civilization meet the oldest cooking tool known to man—the open flame.