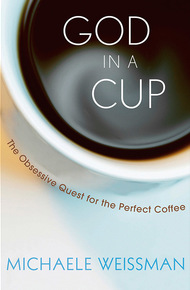 Michaele Weissman is a journalist and author who writes about food, families, business, and American culture. Her work appears frequently in publications such as the New York Times, the Washington Post, and the Wall Street Journal. Her coffee blog can be found at michaeleweissmanwrites.com/godinacupofcoffee. She lives in Chevy Chase, Maryland, with her husband.

God in a Cup: The Obsessive Quest for the Perfect Coffee by Michaele Weissman

Follow the ultimate coffee geeks on their worldwide hunt for the best beans.

Can a cup of coffee reveal the face of God? Can it become the holy grail of modern-day knights errant who brave hardship and peril in a relentless quest for perfection? Can it change the world? These questions are not rhetorical. When highly prized coffee beans sell at auction for $50, $100, or $150 a pound wholesale (and potentially twice that at retail), anything can happen.

In God in a Cup, journalist and late-blooming adventurer Michaele Weissman treks into an exotic and paradoxical realm of specialty coffee where the successful traveler must be part passionate coffee connoisseur, part ambitious entrepreneur, part activist, and part Indiana Jones. Her guides on the journey are the nation’s most heralded coffee business hotshots: Counter Culture’s Peter Giuliano, Intelligentsia’s Geoff Watts, and Stumptown’s Duane Sorenson.

With their obsessive standards and fiercely competitive baristas, these roasters are creating a new culture of coffee connoisseurship in America—a culture in which $10 lattes are both a purist’s pleasure and a way to improve the lives of third-world farmers. If you love a good cup of coffee—or a great adventure story—you’ll love this unprecedented up-close look at the people and passions behind today’s best beans.

I fell in love with coffee on a sunny October morning in 2005 while sipping a velvety cappuccino at an outdoor table in front of Murky Coffee, ground zero for coffee lovers in Washington, D.C., my hometown. I'd zipped downtown to Capitol Hill that morning to interview Murky's spiky-haired owner Nick Cho, then thirty-one, for an article on young coffee entrepreneurs I was writing for the New York Times. I'd been drinking coffee since my early twenties, buying whole beans and dutifully grinding them at home, but for all my efforts I might as well have been drinking hot water and Ritalin. Until I met Nick I don't think I had ever tasted coffee mindfully, or perceived it as a product grown, processed, and prepared by artisans. Coffee back then was notable for what it lacked. If it lacked bitterness, it was good.

In my reporting I had been tracking down the most respected small companies that roast the highest-rated coffees. The boutique end of the coffee business being what it is, that meant I was talking with a lot of entrepreneurs who were still in their thirties. These young guns took me by surprise. They were magnetic, anti-authoritarian, and rapturously in love with coffee. They were far more engaging than the high-tech entrepreneurs I had written about. When we talked, they poured all their mojo into explaining their world and their businesses, using every ounce of available juice to convince me that coffee is the culinary world's most enticing shore, a vast unexplored coast of limitless potential.

The coffee guys buy, roast, and sell what the industry refers to as specialty coffee. These are elite "craftsmen" coffees grown with special care by farmers using traditional agricultural techniques on farms located in Latin America, Africa and Asia—coffee grows in as many as fifty countries located in a mountainous band that circles the globe near the equator along common latitudinal lines.

The coffee guys shared their excitement about one superhigh-quality coffee—Hacienda La Esmeralda Special. This much-ballyhooed bean from a small Panamanian coffee farm had won their hearts and their pocketbooks—boy oh boy, was it expensive. As I learned more about Esmeralda Special, it seemed to me that this coffee was emblematic, highlighting trends in the specialty business while showcasing the people who were driving the industry forward. In an era when so many strive for the ultimate something, Esmeralda Special had the razzle-dazzle of a superstar. Specialty coffee buyers described this precious bean as the most exotic and the most expensive coffee in the world.

Everything about Esmeralda Special was unexpected. Where it came from. What it tasted like. Even the look of the tree it grew on. Until this coffee from Panama made headlines, most coffee lovers outside and inside the specialty industry would have expected the priciest coffee on earth to grow on the side of a mountain in Kenya or on a volcano in Hawaii. But they would have been wrong. Hacienda La Esmeralda Special comes from Boquete, Panama, center of one of the world's smallest coffee-growing industries. Moreover, this precious coffee grows on a few acres most farmers would not bother to cultivate. Too steep. Too windy. That's what growers would have said until Esmeralda Special began commanding killer prices. In 2005 this coffee sold for $20 a pound green, and roughly twice that roasted—a record at the time. In 2006 it sold for $50 a pound green, fifty times the going rate, meaning customers in the United States were paying $100 a pound and more. In 2007 Esmeralda commanded $130 a pound green, meaning retail customers were paying in excess of $200 a pound. What coffee roaster would buy such a bean? And to whom could he possibly sell it?

The Esmeralda story is about an ugly duckling coffee that grew into a gorgeous swan. It's about scarcity, and the lust that scarcity engenders in those driven to possess what others can never have. It's about the greed that inevitably emerges when the possibility of making a great deal of money selling something rare and precious presents itself. And it is about a new generation of hip young coffee buyers who are madly, wildly, deeply in love with coffee in a way their elders in the coffee business find ever-so-slightly preposterous.

Thirtysomething guys in the specialty business, the main characters of this story, swoon for Esmeralda. They are smitten by its over-the-top nose and its cornucopia of fruity flavors. They are captivated by its mysterious origins. Their love is not rational and it's not all about business. But business interests do lurk in the background. Of course the young coffee guys are titillated by the price Esmeralda commands. And as entrepreneurs operating in the high end of the coffee business, they see Esmeralda as a point of entry for a new breed of coffee drinkers who will spend the money for coffee that is rare and fabulous.

These guys definitely have an agenda when it comes to raising the price of coffee. They believe charging more is key to the specialty industry's future. They reject the traditional buy-low-sell-high business model: that way of doing business squeezes the breath from coffee farmers and everyone else in the specialty world, they say. Their goal is to earn more money for everyone along the coffee chain. The new model—the Esmeralda model—demands that traders buy high and sell higher.

The young hotshots who led the bidding for Esmeralda call themselves coffee's Third Wave, and they think of themselves as coffee revolutionaries. This book tells the story of my travels with these Third Wave rebels in pursuit of perfect coffee. Together we tasted Hacienda La Esmeralda Special in Panama; observed the birth of a new specialty industry in Burundi; explored Ethiopia, coffee's fabled motherland; visited dozens of coffee farms; and met farmers living as their ancestors lived a thousand years ago and others who enjoy Hollywood-style luxuries. In Nicaragua I learned how coffee is "cupped," or tasted and ranked, by professionals, and I observed a famed international coffee competition. Back home, I got to know the high-end coffee scene in Durham, North Carolina; Chicago; Los Angeles; Portland, Oregon; and New York. I was awed and entertained by the skill and enthusiasm exhibited by young baristas taking part in barista competitions in every region of the country and many countries in the world. These competitions are a big deal. Thousands watched the World Barista Championship in Tokyo in August 2007, in person and online. Here at home, I visited the coffee guys' cooler-than-cool retail cafés where coffee is brewed in sleek, high-performance machines called Clovers that cost $11,000 apiece and skinny hipsters in Chuck Taylors serve up espresso drinks topped with latte art.

It was quite a ride.

In addition to my interest in coffee, I was motivated by curiosity about the coffee guys themselves. These young entrepreneurs were playing on a mighty big stage. Coffee, it turns out, is the second most often traded commodity, after oil, and the global coffee trade each year generates hundreds of billions of dollars worldwide.

Are these young guys up to revolutionizing this industry? Can they convince the public that there are real reasons to pay $12, $15, $20, or possibly $40 a pound for coffee beans? Is their focus on coffee quality and on bettering the lives of some of the earth's poorest farmers proof positive that their generation is different and better than those who came before? Or are they deluded egomaniacs who will overspend their businesses right down the tubes? Could it be that they are the real thing—members of an anomalous pool of talent that emerge occasionally to transform entire industries, from independent filmmaking to software?