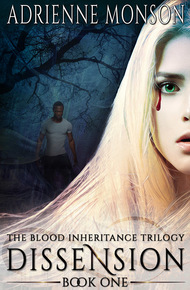 Adrienne Monson is an award-winning hybrid author who has been hailed by MSN as a "vampire expert". While she is primarily known for her vampire novels in the Blood Inheritance Trilogy, she also writes historical romance, dystopian, and retold fairy tales. Monson lives in Utah with her husband and children. Aside from writing, reading, and working as a freelance content editor, she's a yoga instructor, loves kickboxing and enjoys baking.

Leisha is a vampire caught in the middle of a bloody war between her people and the immortals; an undying race sworn to destroy all vampires. It's a different life from the one she had 2,000 years ago when she led a quiet life as a devoted mother with her husband Tafari – the very immortal who's now hunting her.

She soon finds herself captured by the government, only to be saved by a mysterious human girl. Leisha and her newfound friend run for their lives while searching for the one thing that can bring an end to this eternal conflict—the prophecy child.

Holding his neck to her mouth, Leisha was in her own mind again, the screams of his latest victim echoing in her head. Kyle was nearing his death and she was able to control the visions emanating from him and focus on the ambrosia of liquid pouring down her throat. She couldn't think beyond the rapture as the sweet coppery blood slid into her stomach, settling it. She gulped without spilling a drop.

Within just a few seconds, her body was already feeling energized. The aching in her head subsided and she felt elated. She closed her eyes in relief when the Hunger retreated from her mind, leaving her to herself again. There was still a little more blood in his body and she adjusted her hold on him in order to suck him as dry as she could.

Feeling more than satisfied, Leisha opened her eyes and looked directly into a pair of the most beautiful silvery-blue eyes framed by an ebony face. She knew those eyes well... had stared into their depths in endless fascination in a time that was long past.

The rapture of her feast vanished quickly as she stood frozen by his penetrating gaze. Her temporary paralysis vanished with the thought of why Tafari was here. Immediately she let go of her victim, allowing the still warm body to slide down her legs onto the filthy ground.

Leisha crouched in a defensive position, wishing she had worn pants instead of her sleazy skirt. Her black heels would make fighting a little more difficult, but she had done it before. She stayed where she was, allowing Tafari to make the first move.

She had wanted to avoid this moment, and had done so successfully for well over a thousand years. But now it seemed Tafari had finally sought her out. They would be evenly matched in combat, and Leisha truly had no desire to kill him. She also had no desire to be killed by him and would do what she must to survive.

"Hello, Leisha," he said, his voice hollow. That was his whole demeanor; his expression was flat and she could feel how withdrawn he was. His arms were folded over his expansive chest with a leg cocked to give a pretense of being casual, but being of large stature and still able to carry himself with lethal grace, he had never looked simply casual.

He glanced down at the body lying on the ground by her feet. "I see you have not changed much." Then he smiled a thin, cold smile.

Showing no reaction to the insult, she kept herself steeled both physically and mentally for the altercation she knew would ensue. "Hi Tafari," she said, shocking herself at the affection that could be heard. Leisha cleared her throat and made her tone bored. "So what do we do now? Fight each other to the death? Seems so cliché, don't you think?"

He shrugged his broad shoulders. "I did not come here to fight you."

That was not what Leisha was expecting to hear. She studied him a moment, trying to decide whether or not he was toying with her.

His firm, square jaw was freshly shaved, and a sudden memory of brushing her cheek against his smooth skin intruded into her mind. She shook her head to keep those thoughts at bay, but Tafari had always had that affect on her. She could never think straight around him, but she thought after two thousand years of being separated her emotions might have dried up.

She straightened and schooled her expression into one of indifference. It was offset by the fact that she was having a hard time looking directly at him. She didn't want to be distracted by those captivating eyes. She focused on his chest instead. "So why are you here?"

He took several steps forward and cupped her face, his fingers digging into the flesh of her cheek, forcing her to meet his gaze.

"I will tell you that I certainly did not come here so you could avoid looking at me as if I were beneath you," he said firmly, a British accent lightly threading his tone. His voice was still cold and flat, but it seemed to have a little quiver to it.

Her breath caught at his touch. It felt electric, and seemed to make her feel alive in a way she hadn't felt since she was human. She had not even bothered to defend herself from his outstretched hand, a realization that jolted her.

Her neck was at an awkward angle since she was only five foot five to his six feet. He let his hand drop but didn't take any steps back. He seemed oblivious to the corpse at their feet.

They were close enough to kiss, and the energy that flowed between their bodies was of a charged violence with an undertone of undeniable chemistry. They stared into each other's eyes for a timeless moment.

"That is better," Tafari said after a few minutes.

Leisha blinked, then scoffed and would have taken a step back if the wall had not been directly behind her. "Oh please, Tafari. You say I'm acting like you're beneath me? I think that's the pot calling the kettle black."

Tafari crossed his arms and smirked slightly. "Seeing as how I am black, would you call me the pot or the kettle?"

She rolled her eyes, but she could feel herself relaxing a little.

A small smile played at the corners of his mouth. "I think I should be allowed one paltry pun considering that is the second cliché you have used thus far."

Leisha felt her own smile wanting to push itself forward, and her lips twitched.

The small smirk disappeared and he cleared his throat. "So I have not seen you make any reports to Ptah for some time. Is it possible that he has allowed you to go out on your own?"

Whatever warmth she had felt quickly shriveled within her. "How would you know that? You've been following me? Watching me?"

She was agitated at herself as much as with him. She had not even had the slightest inkling that someone had been following her. She didn't like the thought of Tafari being near without her feeling it in some way.

"Look," he said. "I needed to talk to you, but I did not want to walk into an ambush of twenty bloody vampires just to do that. I did what I had to do to protect myself." He stared hard. "It is likely you have forgotten I serve a higher purpose than most people could fathom."

Leisha felt like sputtering. "Right. A higher purpose? So murdering me is a higher purpose." He opened his mouth, but Leisha kept on. "I didn't realize your duty was so glorified. So should I bow down to you now, or after you've elevated yourself in my presence? It would certainly make it easier for you to cut my head off!"

"There will be no need for that, vamp. I am sure that there will be plenty of time to kill you later," he said in a biting tone. "I did come to speak with you, so either you can be civil with me as I am attempting to be with you, or we can just end the conversation now."

She studied him suspiciously. "Tell me what it is you came to say so we can both be on our way. That is, if you really meant it when you said you weren't here to try and kill me."

With an edge to his voice he explained. "I came here to warn you."

"You came here to warn me? About your superiority or your higher purpose in life?"

Tafari's eyes flashed violence, then he took a deep, calming breath. "The planets are beginning to align as it has been foretold." Leisha felt a chill run down her spine. "The prophecy child is coming."