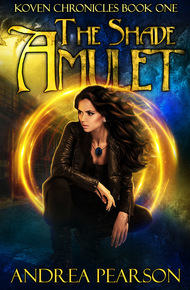 Andrea Pearson, co-host of the popular Six-Figure Authors podcast, has published over two million words under three pen names, including 40+ novels, several non-fiction books, multiple novellas and short stories, and over a hundred articles for professional blogs and websites. She is a regular instructor for WMG's Business Master Class for Authors, and she was executive director for Indie Author Hub for a year and a half. Learn more about her at http://andreapearsonbooks.com/home.html

The Shade Amulet - Koven Chronicles Book One by Andrea Pearson

Who's more dangerous—the brooding, attractive man she's partnered with or the things they're hunting?

Lizzie Ashton thought being a professional Fire Impeder was dangerous, but using her magic to stop bombs, guns, and fires before they start is nothing compared to what happens when Abel, an intense man she's worked with previously, storms back into her life.

Abel needs assistance with a dangerous task that only Lizzie can do. She hesitates to accept his job offer, as what little she knows of his dark past unnerves her, despite their moments of attraction. But when the local police department calls her in on a disturbing murder investigation, Lizzie must put aside her misgivings and partner up with Abel.

Luckily, she has the Shade Amulet to help her. But as more people are murdered—and closer to Lizzie's home—the case quickly becomes personal. Is this job worth her life?

If you enjoy edge-of-your-seat fantasy action, slightly snarky humor, and a hint of romance, you'll love the first book in the pulse-pounding Koven Chronicles. The Shade Amulet will thrill you to the core. It will keep you up late into the night, devouring its pages. Read it now.

Sia and I left the house. Once I'd had a good warmup, I picked up my pace, encouraging my cat to do the same. She wasn't nearly as enthusiastic, but trotted faster anyway.

We had to stop on 200 South at the train tracks—the railroad crossing was flashing, the arms coming down, and a train horn was sounding to the north. The ground vibrated as the train drew closer. It was a slow one, and I looked up the tracks, trying to gauge if it was worth waiting for or if I should turn around and go home.

A movement on the other side caught my attention. A huge dog was chewing on something big, and there was blood. A lot of it. I couldn't tell what the dog had, so I stepped closer—still far from the railroad arm—and squinted. A man's leg flopped into view and I gasped, hands flying to my mouth. What was going on?

The whole body twitched and jerked as the dog chewed it. I shrieked involuntarily, then cursed myself for not holding it in because the dog looked up at me.

I was close enough to hear it growl. Its eyes were dark, its teeth large and bright red from blood. It dropped the arm that was in its mouth and stepped toward me. I backed up. Common sense told me not to run, but I shook with the effort it took not to scramble in the opposite direction.

Sia hissed. Her fur stood on end, her tail three times its normal size. The dog growled again, then lunged toward us.

Self-control out the window, I turned and ran, nearly stumbling on the gravel that lined the road. The train honked, and I glanced back as the dog stopped just in time to prevent getting hit by the train as it rumbled along, horn blazing. I picked up Sia, and ran as fast as I could. Trying to keep her calm while holding her that tight wasn't easy, and her claws were probably ruining my shirt. I didn't know if this would be a long train, but I wasn't willing to risk the dog being able to find me.

Shaking and out of breath, I arrived at my doorstep and flung the door open. Once inside, I called the cops.

It didn't take long before two police cars showed up outside, and once I had explained what happened, I led the way to where I'd seen the dog. My hands shook the whole way.

I hadn't expected the dog to stay around, obviously, but I had expected us to find at least a trace of a struggle—blood, shredded clothes, something. Nothing was there.

Detective Evans glanced at me, confused. I didn't blame him—my reputation here was sound, and he'd never had a reason to believe me capable of exaggeration.

"Let's head back to your place, and you can tell us everything you saw in detail," he said. "We'll take a full report and put it on file in case anyone else sees something—or you do again."

I nodded. Where had the dog gone? But more importantly, where had the man gone? Because I knew I hadn't imagined it.