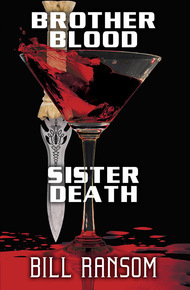 Daniel created Matrix, a face pack for beauty shops, which pulls blood through skin, leaves blissful clients, kills and alerts no one. He prefers milking to butchering. Daniel cultivates his human side; Diana mocks him. Impatient, she hunts out of spite as much as need.

Daniel finally understands that his twin sister will get him killed, and his life's hardest decision is at hand: Milk? Or butcher?

She'd kept only one secret from her twin brother, and she intended to keep keeping it, but she'd have to confess tonight's disaster. She had to stop the wrong because she couldn't make it right. She rode beside their Proxy in his leather-plush Lincoln Navigator. Payment for their clandestine needs had bought the Proxy this wallowing whale of a car. He knew most of their accounts, had produced their last two sets of IDs, then he initiated a relationship with her that was forbidden, dangerous, unforgiveable. He was arrogant in this betrayal of her brother, unexciting in bed, the kind of man who lied about a vasectomy. He switched on a satellite channel that doled out fake jazz for "B" movie seductions, and she rolled her eyes.

"Pull in over here," she said, and pointed out the turnoff to a small county park just off the road beside a stream. She touched her mother's ivory-handled penknife, secure inside her calf-high ostrich-leather boots, and stepped out of the car before it lurched to a stop. She hurried behind a grove of vine maples to a picnic table overgrown by blackberries, out of the headlights of the few passing cars.

"For someone who wanted to talk you were pretty damn quiet in the car," he said. He approached with a swagger, like he was in charge. "What's up?"

"I was pregnant," she said.

"Was? You said you couldn't…that you'd never even had a period—."

She snatched his trachea with an eagle claw grip, and wrestled him, fish-eyed, gape-mouthed to the ground. His hands scrabbled at her hands and tore at her hair.

"It was a thing," she snapped, and squeezed harder. He thrashed and bucked and squirmed into the blackberries. "Eating its own placenta!"

She was out of shape, two months without her personal gym, no long night runs for weeks. He clawed at her hands, tripped her, and rolled both of them up in blackberry vines. Better leverage on her two-handed grip turned his crunched trachea into a sockful of wet cotton. The Green Beret who'd taught her that grip was the only man she'd fucked whom she hadn't killed. She was grateful for the grip, it was the least she could do.

The Proxy's body went limp, his lights out, but she held firm for a moment. She released one hand to slip her mother's ivory-handled knife from its sheath in her right boot.

"I betrayed my brother for you," she snarled. As soon as it was out she knew it wasn't true. She'd betrayed her brother for the thrill, to see how close she could get to the edge of what held them together. She had to make a wrong thing right.

She nicked his carotid with her mother's knife, then wrapped her legs around him and sucked down all she could before she got too full and too woozy to drive. Her missed step on the slippery slope between thrill and death killed the Proxy, and now she couldn't remember whether she'd meant to kill the proxy or whether she'd just happened to kill the proxy.

She'd begun the share her brother's concern about her mental…differences. She took a moment to catch her breath and to steady herself from the inevitable onslaught of a recent, disturbing change—disorientation, dissociation…confusion.

She dragged the Empty the few yards to a small stream and washed off the obvious from both of them. They'd only be in the car for half an hour, no moon, little traffic, tinted windows. She dragged him back to the passenger side, then grunted and cursed as she wrestled him up and into the seat. Two months without her weight set was starting to show. She climbed into the driver's seat, tilted the rear-view mirror and saw the hatchwork of scratches on her forehead and hand, one fingernail puncture next to her right eye.

"You nearly got it," she said, and patted the Empty's thigh. "Nice try. Wouldn't have helped."

Headlights in the mirror cast a silver sheen across her wild tangle of hair, flecked with bits of brush and dead leaves. No serious damage. Blood down the front of her northwest-gray Vergara suit. She'd rushed the payoff and made herself too woozy now to think or to care. She belted her Empty into the passenger seat, leaned his seat back and pulled his jacket up to his chin. Her matching shoulder bag at his feet held her brother's tactical tools. She hefted the bag and dropped it.

Yep, guess I meant to. She fastened her seat belt and patted her Empty's cheek. "Gotta go."

She'd need those tools when she got to their storage unit. The Empty's Lincoln was a boat, a barge that wallowed out of the little roadside park and onto the highway back to the city. She reviewed the details of the identity on her two-month-old license in case she was pulled over. Soon she would be in no condition to dredge up memories of any kind.

Her brother loved that word, "narrative." She preferred "story". He would be prepared, but angry, their backup ID already safe in his old puzzle-box. A scramble of gravel under the tires startled her back onto the highway, heart racing.

She'd already wasted too much time on the Empty, her brother's so-called ultra-secure (he preferred 'uber-secure') "Proxy".

Breaking any of the three rules turned a Proxy into an Empty, usually her brother's job. This Proxy managed a perfect three.

She told the Empty beside her, "You forced me into an executive decision."

She stuck the Empty's thumb drive into the console but it only played "how to get ahead in the insurance business" lectures and affirmation mantras. Late-night radio brought the full spectrum of Christian music and sermons, backed up with the alien-obsessed DJ in Pahrump, NV, that her brother liked. Which of her own music would she play if she had it? "Sympathy for the Devil?" "Stairway to Heaven?"

She switched off the radio-babble because she caught herself drifting her lane again. Memories unspooled, her life chained to one of her brother's Proxies after another, a blur of code names, most without faces. This one bypassed her brother "to talk over coffee" when he knew in-person contact was forbidden. His intentions were neither talk nor coffee but betrayal and money and sex. Their relationship ended in this slash and quiver of impotent wrestling in that small county park outside Portland. Her brother should be grateful she was cleaning this one up herself.

The Proxy'd been right about her lack of periods. Her brother claimed their kind were hybrids, infertile mules, but he still ordered condoms for his women "In case it's a virus." She didn't like sex with men anyway, but she liked how they always fell for it. The bitterness of testosterone spoiled the payoff. She wished she could stick to estrogen, but hungry beggars couldn't be choosey.

She hated driving because of the crippling headlights, fear of getting pulled over, fake ID, questions. Maybe delay, detainment, death. Dark glasses didn't help. When full, she got dizzy and disoriented around lights and movement and questions. She couldn't always remember which she she was supposed to be, but she knew better than to risk being detained until daylight. She would wake up from this with her new ID on her pillow and her brother starting the whole grind over. She couldn't stay conscious much longer. She wanted to be done with the Empty and back home in her bed before daylight. Her beautiful bed beside Robert, her beautiful plant, in their drab drab apartment in their drab drab building in their gritty, gray neighborhood by the river.

Brother will be pissed.

Brother never moved without force even if he wanted to move.

She snapped alert when she almost missed the port exit and slid the Empty's Lincoln sideways down the curve. He slumped onto her shoulder and she shrugged him upright at the stop sign. No traffic. She patted her Empty's cheek.

Now maybe brother will get us out of here.

She rounded a dumpster in the alley behind their warehouse storage and crunched the front bumper against a fire hydrant. She only wanted to sleep and was not tracking well, but she had to complete her mission, wobbly or not. Four a.m., no traffic, no cameras. She pulled the storage key from the slit inside her belt and was glad she didn't have to remember a code.

She yanked open the roll-up door to access their white, thirty-foot box van and immediately banged her shin on the tow unit linked to their Mercedes wagon. She'd wanted red but Brother said, "No! Too much attention!", so she got ugly suburban tan.

She missed attention. The Proxy gave her attention. She dragged the body out of its car and stumbled over the tow unit again. The Empty broke her fall, and she struggled to untangle herself from its unwieldy weight. She grunted it into the van, then rolled it into her twin's chest freezer atop their emergency food and Brother's lab supplies. She scrambled back to the Lincoln for the tools to finish the job.

She drove exhausted and afraid. Locked the Proxy's car outside their apartment, left keys for Brother's disposal through their new Proxy. Brother always had a Proxy-in-waiting and a stack of extra IDs in his old puzzle-box. She dreaded learning new IDs.

She didn't remember driving home, but she beat the sunrise and beat her brother home from work. She spit a dribble of blood into one large, bruise-purple leaf-trap on Robert the flytrap, tickled it with her fingernail to watch it close.

"G'night, Robert," she said. She atomized a mist of distilled water and puffed a lungful of CO2 at the plant. She flopped onto her bed, her jacket and blouse bloodied, just in time to embrace the onslaught of her three-day torpor.

Her final thought before darkness: Two months in this hole! Now he'll have to fix it. Now we'll get the hell out of here.