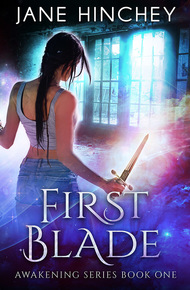 Living in the City of Churches (aka Adelaide, South Australia) with her man, two cats, and turtle, she would really prefer to live in a magical town where cooking could be done with a snap of her fingers, and her house would clean itself.

When she's not in her writing cave she's usually playing the Sims, Civilizations or something similar, binge-watching Netflix or upping the ante in the crazy cat lady stakes.

Georgia Pearce possesses remarkable psychic abilities. When she discovers an ancient dagger hidden in her workshop, she knows it can only mean one thing. Trouble.

Trouble arrives in the form of Zak Goodwin, an entity more powerful – and definitely sexier – than any she's come across before. However, when a horde of dangerous vampires show up and threaten Georgia and her sister, she has no choice but to ask Zak for help.

Along with a shifter cop, a band of vampire warriors, and her own psychic skills, Georgia sets out to stop the awakening of an immortal vampire who has the power to destroy the world — and discovers that staying alive isn't nearly as dangerous as falling in love.

With his hands dripping in blood and the severed head of a demon lying at his feet, Zak took no time in savoring the victory - he'd never seen demons in these numbers before and if he and his men intended to get out of this alive, they needed to stay focused. The putrid sulfur of their stench assaulted his senses, making his eyes burn.

Across the room, Aston was battling two demons, a sword in one hand, dagger in the other. Dainton was at his back, lunging at an already wounded demon, slashing deeply across his torso revealing flesh and bone.

Cole, Kyan, and Heath were knee deep in bloody corpses, ripping off heads and tossing them, wading their way through the gore, eyes burning red with the thrill of the fight. He'd taught his team well, and they hadn't disappointed him.

Loud explosions could be heard from outside, rattling the building. A flash of lightning erupted from a demon's hand and snaked across the room toward him. Fucking demons. Zak snatched the demon by its neck. He lifted it over his shoulders and snapped its body over his knee, then flung it aside. Frank was tangling with three other demons, wincing when one sent him smashing into a wall. Zak was there in an instant, pulling Frank to his feet, pausing with his hand on his shoulder, healing him. With a slap on the back in thanks, Frank jumped back into the fray.

Heath was throwing demons across the room, bodies flying. Zak caught another, this time tearing out its throat with his fangs before tossing the body. Another flew past and he grabbed, twisting off its head and throwing it like a soccer ball.

Another explosion, louder than the first, rocked the building. The ground bucked, throwing them down and toppling demons.

Veronica appeared in the doorway, hands against the frame as she struggled to remain on her feet with the building trembling and buckling around them.

"Zak!" she shouted, "we have to get out. Now! The house is collapsing. The fuckers have rigged explosives."

"Everyone out!" Zak bellowed, eyes scanning the room for his warriors. Frank, his head of security, was on the far side, shoving the body of a demon off as he surged to his feet. Aston, Dainton, Cole, Kyan, and Heath made up his team of warriors, and what a team they were. Elite fighting machines, they were highly skilled at what they did - and not a bad bunch of blokes in the bargain. The five of them headed toward the door, flinging demons as they went.

Parts of the ceiling were starting to collapse as they hurried down the hallway. The lights flickered, then went off, but none of them needed light to see. Demons still came at them, but the warriors flicked them off as if they were nothing more bothersome than a fly.

Crashing through the back door of the house they tumbled out onto the lawn. Veronica had already evacuated the domestic staff, a group of four humans who stood huddled behind her, dazed and afraid.

Zak stood on the lawn and watched as his house collapsed with a roar, the center caving in first, the roof buckling inwards like it was being sucked into a black hole. Within minutes the house was razed, nothing remaining but a plume of dust.

His warriors stood in formation around him, watching, as he did, with no emotion as their home was destroyed. While the loss of his home pissed him off, it wasn't the end of the world. He had plenty of resources; finding shelter for them was not an issue. What had his blood boiling was the fifty or more demons who were facing them from the other side of the pile of rubble that used to be his house.

Zak's control slipped and power coursed through him. He'd forgotten what it felt like to just let go and let his magic absorb him.

Frank glanced at him; he could feel the power in the air that was now filled with electricity. He ordered the warriors back, away from Zak. They didn't want to be close to him when he unleashed the full potential of his power.

Zak raised his hands, the air bent around him as his power unfurled in a red haze. The demons were bounding like hellhounds across the debris, intent on getting to him and ripping him to pieces. They had no chance.

Releasing his magic, a pulse of raw energy swept from his open hands in a wide arc before him, blasting the demons into oblivion before they even got close. They disintegrated in front of him, no blood, no bones, simply piles of ash. Felled in one swoop, the air was now still and eerily silent.

"Holy Fuck!" Heath muttered behind him. "That was some red hot shit right there."

"You are well?" His gaze swept across them, searching for injuries. They nodded in reassurance, a few minor scrapes, clothing torn and covered in blood, but unhurt. He pulled in several deep breaths, quieting his magic, letting it settle back inside of him. Now that it'd had a taste of action, it wanted to come out and play. Zak had no intentions of letting that happen - his house may have been destroyed, but he'd be damned if he would allow himself to cut loose and destroy the rest of the world, for that was what would happen if he truly allowed his magic to take over.

Frank stepped up to him and murmured quietly "Your ring." He nodded at Zak's hand.

The ring was understated in design, a pattern of three ribbons intertwined with different shades of platinum and gold that adorned the ring finger on his right hand. Only now, one of the rivers was no longer platinum but glowed red as it flowed through the design. A beautiful, but chilling effect as it twisted and wove around his finger as if alive.

"It has been activated." His words were calm, belying the anxiety that suddenly rushed through him. For the ring to be activated, the dagger had not only been found, but that too had been awakened. With blood. This wasn't good, wasn't good at all.