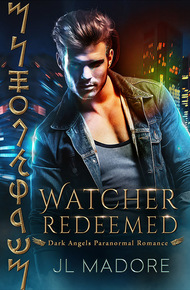 JL Madore is a multi-genre novelist giving life to Fantasy, Paranormal, Sci-Fi, and Time-slip Historical love stories. Under the pen name, Auburn Tempest, she writes Fantasy without the sexy-steamy. But whether Romance or not, she loves to twist Alpha heroes and kick-ass heroines into chaotic, hilarious, fast-paced, magical situations and make them really work for their happy endings.

Duty. Honor. His brothers. That's all he has.

On the outs with his commander and fighting to win back his place in the garrison, Kyrian finds more trouble than he's ready for. He kills the wrong male, sleeps with the wrong female, and as the Darkwold Rebellion builds momentum, there is nothing to do but fight for an outcome even he doesn't believe possible.

The Watchers of the Gray Series by JL Madore, joins the gritty, dark paranormal romance traditions of JR Ward, Sherrilyn Kenyon, and IT Lucas.

Kyrian sidestepped a clothing rack, giving a wide berth to two half-naked women as they grappled and swung. Screeching at a decibel beyond imagination, their altercation seemed to be focused on the last Cat Woman costume in size four and the Superhero Halloween party of the century tomorrow night. The blonde salesgirl—ironically dressed as a naughty cop—tried to hold them apart, while her brunette Pocha-hottie co-worker muttered into her walkie for help.

Cue two muscle-heads in stretched black tee's striding in to break up the fun.

Amusing as a catfight would normally be, the influx of testosterone and hostility made Kyrian itch. He slid beyond the drama and followed the short corridor to the close quarters of the boutique's private dressing area.

From the back, the mass of the hulking male acting as a blockade could have been either of the Egyptian twins. The absence of a spiked dog-collar gave it away. Kyrian drew a deep breath, hoped for the best and steeled himself for the worst. "Seth. How's things, my brother?"

"Greek." Seth offered up his tattooed fist for a bump and shifted to unblock the entry. "Same ole. Cleaning up both on the streets and in the sheets. You? How's the clinic and that Lightworlder doc of yours?"

Kyrian shrugged. Stepping into the ten-by-ten mirrored sitting area, he positioned himself to watch the doorway and the corridor beyond. "Clinic's almost operational. Drina's a rock star. She's got mean skills."

Really? Was there anyone in the three realms Seth and his twin hadn't sampled—jointly or one-on-one. Kyrian rubbed a hand across his jaw and exhaled. "At least tell me you treated her well. It was just you, right? Seth?"

Seth chuckled and waggled his brows. "Consenting adults, Greek. S'all good. And trust me, you don't need the details." Seth resumed his position in front of the access hallway, his bulk sucking the walls of the space in close and the ceiling down tight. His brother-in-arms wasn't one of those bulging 'roid-droid types. Seth and his twin were massive warriors who fed, fought, and fucked like machines.

Kyrian met his gaze and tried to read his mood. "You don't seem surprised to see me. We good?"

"Us? Always." As he scrubbed his fingertips against his dark, buzzcut hair, his jacket shifted, and the butt of his Glock made a quick appearance. He had his double holster on, so the matching piece would be under the other arm of his trench. Kyrian approved; the guy was guarding precious cargo.