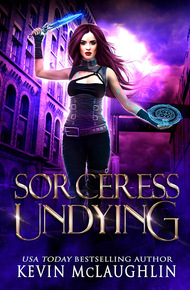 Kevin McLaughlin is a multiple USA Today bestselling author of science fiction and fantasy novels, with over eighty books published. He believes in giving back to the writing community that helped him out during the early days of his career, so he uses his experience to boost others. He has been a speaker at Boskone, Dragon Con, the Nebula Conference, 20Books London, and many other events. A skilled public speaker with experience in education, McLaughlin sees it as both pleasure and obligation to pass along to others the skills he has learned, so that the chain of people helping people continues unbroken.

What does a four-hundred-year-old sorceress fear most? Her past. And the ghosts from early days which still haunt her…

Melicent has seen it all and done most of it, too. But she wasn't always the powerful sorceress she's become today. In the late 1500s she was a simple village girl whose life took one nasty turn after another.

When she suddenly becomes aware of powers that she doesn't understand or know how to control, she becomes an easy mark for a special sort of predator: one who sucks the living magic from others in order to survive.

To beat him, Melicent will have to call on all her magic. But against a wizard able to drain power from others, will even that be enough?

The demon was closing in on us for the kill. I was still too weak to do much about it, and Ryan was too inexperienced. His heart was in the right place, but he simply didn't have the knowledge he needed and we weren't going to be given the chance for him to learn. In a few moments it would be on us. I summoned what magic I had left, determined to go down fighting.

Ryan's voice was soft next to me. "Mel, what you did last winter — can you take my power without killing me?"

I paled. That was a dangerous idea. I could drain power from other spellcasters, but it tended to have fatal consequences. Keep the person being drained alive? I'd never tried such a thing. "I don't know."

He grimaced. I felt him reaching out for nearby ley lines. His faculty with those lines of magical force was uncanny. I could make some use of them, of course. But I couldn't just suck down power from them the way he could.

All the power in the world wasn't going to save us, though. His spells wouldn't be able to crack the demon's defenses. What he was asking was dangerous, maybe deadly. I'd never tried sucking the power from someone without taking away everything, including their lives. I didn't even know if it was possible.

Still I hesitated. "Are you certain?"

He nodded. I still hesitated, trying to think of any other way we could stay alive. Nothing came to mind. He was right. It was this or nothing. He had access to enough raw magic to win this fight. I had the skills to use that power. Surviving was going to require everything both of us had.

I cast the spell.

The power flow was immediate. Ryan wasn't trying to fight my drain on his magic. If anything he was pushing his power my way, opening himself up. Energy from the nearby ley lines poured into me. It felt like I had enough magic to move mountains. Maybe literally. I gloried in the raw force running through my veins.

But what about Ryan? Worry for him broke through my power high. I snapped the spell off and the drain ceased. He sagged to the floor, landing with a hollow thud. I winced at the sound and at the same time worried that I had hurt him permanently. But no — his eyes opened back up and he looked up at me. His mouth opened as if to say something, but he was too weak to speak.

I spread my fingers toward the demon and rays of red light shot from my palm, shooting toward it. The foul creature set up shields to block my magic, but the beams shattered them instantly and kept going, burning deep into its carapace. It bubbled and steamed where my magic touched it. One leg flew free, snapped off by a beam, and the demon toppled to its side.

It was on the retreat, but I needed to maintain the pressure. I'd fought things like this before. Horrid creatures from outside our dimension with an appetite for everything of Earth. Give them a foothold here and they'd become serious trouble. I wasn't about to allow that to happen.

It scuttled away, then stopped and fired bolts of black fire toward me. I laughed and cast a shield between me and the blasts. They spattered apart on impact. Nothing this demon had was going to break through my shields, not with so much power available to me!

"Not so tough when you're facing someone who knows how to beat you, eh?" I stalked toward the thing, burning more of it away with my magic for each step I took.

The demon was in full flight now, backing away while it tried vainly to defend itself. There were no more attacks coming at me. It was using all its magic just to try and stay alive. Not that it would matter in the long run. I followed it, blasting away.

By the time it reached the far wall I'd sliced all the limbs from the insect-like creature. It's mandibles were broken. There were a dozen holes through its carapace where my beams had struck, each trickling a stream of boiling black ichor that hissed and steamed in the air. Still it tried to flee, inching further away from me like a worm. I tossed a web of magic around the demon, pinning it to the floor.

I glanced back at Ryan. He wasn't moving. That wasn't good. A glance at the demon told me it wasn't going anyplace. I could spare a few moments and went back to his side.

Reaching out with my magic toward Ryan, I felt his heart shudder and skip a beat. It was slowing down. He'd sustained so many injuries that without his magic his body was shutting off. Without help, he'd die.

I couldn't have that. Five swift steps brought me to his side. I'd been a healer long before I'd become the Soulstealer. I placed a hand on each of his shoulders and prepared to pour magic into his broken form, then stopped. There was another way that would be more fun. I leaned in to kiss him instead.

His lips were cool, but warmed quickly as I sent healing magic through them. Within moments he'd returned the kiss and opened his eyes.

I stood back up and stared daggers at the demon. "Time to finish the job. Ryan, you remember what happens when these things die?"

He ought to. He'd beaten one, once, through luck and raw power. When one of these demons dies, it releases all its remaining magical force in one big burst. Anyone standing at ground zero had best be shielded if it wanted to live.

"I'm not sure this place will survive the blast," I said. I eyed the ceiling. Scratch that, I was pretty damned sure it wouldn't. One big boom and this whole place was going to come apart. I glanced over at Ryan's friends, who were coming to help him up. A little magic and a hand gesture opened a Gate that would bring them all home again. "Get him out of here."

They helped Ryan stand, supporting him on either side. One of them turned to me and said, "You're complicated, aren't you?"

I had to laugh at that. I'd fought against these people, tried to hurt them. Today we were on the same side. Tomorrow? If there was one, who knew what it would bring?

Ryan opened his mouth to say something. The words were barely audible. He was still weak, but I'd given him back enough magic to keep him going until he recovered. "Thank you."

My eyes grew moist. Yes, there I was, powerful sorceress about to get weepy over a boy! Happens to the best of us, I suppose. "Thank you, love."

Then I turned away from him before I regretted my decision. I stalked toward the demon, gathering the power for a massive spell between my hands. It squealed in terror, anger, and hate. The demon knew what was coming for it.

As Ryan and his friends exited through my Gate, I released the spell.

All of that pent-up power blasted forth from my hands, driving ever deeper into the demon's form. It peeled back, layers fading away as my magic penetrated deeper into its core. There was a brilliant flash of light and heat as the creature broke apart. I'd been waiting for that and cast the strongest shield I possibly could, praying it would be enough to keep me alive.