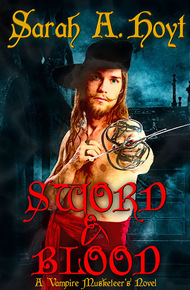 Sword & Blood by Sarah A. Hoyt

The France of the Musketeers has changed. Decades ago, someone opened a tomb in Eastern Europe, and from that tomb crawled an ancient horror, who in turn woke others of its kind.

Now Paris is beset by vampires, the countryside barren and abandoned. The Cardinal has become a vampire, the church is banned, the king too cowed to fight.

Until now, the three Musketeers, Athos, Porthos and Aramis have stood as a bulwark against the encroaching evil, their swords defending the innocent and helpless.

But last night, in a blood mass, Athos was turned into a Vampire. And a young vampire orphan has just arrived from Gascony: Monsieur D'Artagnan.

Things are about to get... complicated.

This book was originally published under the pen name Sarah Marques

Aramis looked over d'Artagnan's shoulder and his eyes narrowed. The sword he'd never sheathed rose as he stood straighter and called, loudly, "To me, musketeers," a call echoed by Porthos, in stentorian tones. "To me, to me of the king."

Their shouts peeled echoes from the surrounding buildings, reverberating in the night with an edge of despair.

Half-fearing that a gross joke was being played on him; ignored by the musketeers; frightened of the bleakness in their gazes, d'Artagnan turned around.

A wall of vampires advanced toward them. So dark that they seemed to meld with the surrounding night, three rows of vampires, at least, walked toward them—shoulder to shoulder, rank on rank, all of them strange, thin, almost insectile creatures, their faces frozen masks showing no emotion at all. They weren't even dressed but looked, rather, as though the clothes they'd worn while living had fallen to pieces on their bodies, and remained attached only by dirt or rot.

Pieces of them, ragged and encrusted with dirt, flapped with their movements. But the blades they held shone bright and sharp.

Porthos leaned forward, spread his feet further apart bracing for better balance, and spared one brief look at Aramis. "To me of the king," he shouted. Then, in a lower tone, "No one else is coming."

"No musketeers in this part of town," Aramis said. He sounded very calm. "We made sure of it. If we could toll the bells . . . If the churches were still ours. If anyone still knew what the bells meant, and if that chapel weren't sure to be crawling with vampires." He shrugged gallantly, his expression frozen and lost. "As it is we die here, my friend. We die here. It has been an honor, Monsieur du Vallon, my dear Porthos, to fight evil by your side."

"Likewise, Chevalier d'Herblay, my dear Aramis," Porthos said, his voice light and airy. His features settled in lines like granite.