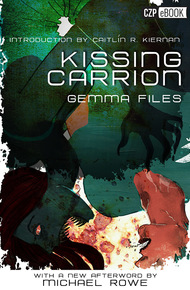 Gemma Files was born in London, England and raised in Toronto. Her story "The Emperor's Old Bones" won the 1999 International Horror Guild Award for Best Short Fiction. She has published two collections of short work (Kissing Carrion and The Worm in Every Heart, both Prime Books) and two chapbooks of poetry (Bent Under Night, from Sinnersphere Productions, and Dust Radio, from Kelp Queen Press). A Book of Tongues, her first Hexslinger novel, won the 2010 DarkScribe Magazine Black Quill Award for Small Press Chill, in both the Editors' and Readers' Choice categories. The two final Hexslinger novels, A Rope of Thorns and A Tree of Bones were published by ChiZine Publications in 2011 and 2012. We Will All Go Down Together followed in 2014, and the Shirley Jackson and Sunburst Award-winning Experimental Film came out in 2015.

From the haunted hills of Roman Britain to the sewers of occupied Warsaw . . . in the bloodied streets of Revolutionary Paris, and the anarchy World War II Shanghai . . . out of the wilds of America, India, Africa and Europe . . . down the long savage darkness of the centuries, monsters have fed upon us. They are shapeshifters, vampires, sorcerers and spirits—things named only in myth, and things for which we have no name. They are our demons, our reflections, our desires and our nightmares. And all too often, they are . . . only human.

In this second collection from Gemma Files—featuring the award-winning The Emperor's Old Bones (winner of the 1999 International Horror Guild Award for Best Short Fiction), and five never-before-published stories—we tour the overlooked intersections between wilderness and civilization where secret dances of fear and pain are performed and hunters and hunted change roles.

One of Gemma's earliest story collections, finally available as an ebook, with an introduction by the wonderful Caitlín R. Kiernan, and a new afterword from Michael Rowe for the updated edition. Shirley Jackson Award-winner Gemma always packs a punch in both her novels and short fiction—leaving you upset, bereft, with your mind reeling and longing for more. Includes the seminal short story and International Horror Guild Award-winner, "The Emperor's Old Bones." – Sandra Kasturi

ExcerptQ: Are we living in a land where sex and horror are the new Gods?

I AM PERSECUTED by angels, huge and silent—marble-white, rigid-winged, one in every corner. Only their vast eyes speak, staring mildly at me from under their painful halos, arc-weld white crowns of blank. They say: Lie down. They say: Forgive, forget. Sleep.

But being dead is nothing peaceful—as they must know, those God-splinter-sized liars. It's more like a temporal haematoma, time pooling under the skin of reality like sequestered blood. Memory looping inward, turning black, starting to stink.

A lidless eye, still struggling to close. An intense and burning contempt for everything you have, mixed up tight with an absolute—and absolutely justified—terror of losing it all.

Yet here I am, still. Watching the angels hover in the ill-set corners of Pat Calavera's Annex basement apartment, watching me watch her wash her green-streaked hair under the kitchen sink's lime-crusted tap. And thinking one more time how funny it is I can see them, when she can't: They're far more "here" than I am, one way or another, especially in my current discorporant state—an eddying tide of discontent adding one more vague chill to the moldy air around her, stirring the fly-strips as I pass. Pat's roommate hoards trash, breeding a durable sub-race of insects who endure through hot, cold and humid weather alike; he keeps the bathtub full of dirty dishes and the air full of stink, reducing Pat's supposed bedroom to a mere way-stop between gigs, an (in)convenient place to park her equipment 'till the next time she needs to use it.

Days, she teaches socks to talk cute as a trainee intern on Ding Dong The Derry-O, the world-famous Hendricks Family Conglomerate's longest-running preschool puppet-show. Nights, she spins extra cash and underground performance art out of playing with her Bone Machine, getting black market-fresh cadavers to parade back and forth on strings for the edification of bored ultra-fetishists. "Carrionettes," that's what she usually calls them whenever she's making them dance, play cards or screw some guy named Ray, a volunteer post-mortem porn-star whose general necrophiliac bent seems to be fast narrowing to one particular corpse, and one alone . . . mine, to be exact.

Pat can't see the angels, though—can't even sense their presence like an oblique, falling touch, a Seraph's pinion-feather trailed quick and light along the back of my dead soul. And really, when you think about it, that's probably just as well.

I mean, they're not here for her.

Outside, life continues, just like always: Jobs, traffic, weather. It's February. To the south of Toronto there's a general occlusion forming, a pale and misty bee-swarm wall vorticing aimlessly back and forth across the city while a pearly, semi-permeable lace of nothingness hangs above. Soft snow to the ankles, and rising. Snow falling all night, muffling the world's dim lines, half-choking the city's constant hum.

Inside, Pat turns the tap off, rubs her head hard with a towel and leans forward, frowning at her own reflection in the sink's chipped back-mirror. Her breath mists the glass. Behind her, I float unseen over her left shoulder, not breathing at all.

But not leaving, either. Not as yet.

And: Sleep, the angels tell me, silently. And: Make me, I reply. Equally silent.

To which they say nothing.

I know a lot about this woman, Pat Calavera—more than she'd want me to, if she only knew I knew. How there are days she hates every person she meets for not being part of her own restless consciousness, for making her feel small and useless, inappropriate and frightened. How, since she makes it a habit to always tell the truth about things that don't matter, she can lie about the really important things under almost any circumstances—drunk, high, sober, sobbing.

And the puppets, I know about them too: How Pat's always liked being able to move things around to her own satisfaction, to make things jump—or not—with a flick of her finger, from Barbie and Ken on up. To pull the strings on something, even if it's just a dead man with bolts screwed into his bones and wires fed along his tendons.

Because she can. Because it's an art with only one artist. Because she's an extremist, and there's nothing more extreme. Because who's going to stop her, anyway?

(Which I probably can't.)

A quick glance at the angels, who nod in unison: No, not likely.

Predictable, the same way so much of the rest of this—experience of mine's been, thus far; pretty much exactly like all the tabloids say, barring some minor deviations here and there. First the tunnel, then the light—you rise up, lift out of your shell, hovering moth-like just at the very teasing edge of its stinging sweetness. After which, at the last, most wrenching possible moment—you finally catch and stutter, take on weight, dip groundwards. Go down.

I have no name now, not that I can remember, since they take our names first of all—name, then face, then everything else, piece by piece by piece. No matter that you've come down so fast and hard, fighting it every step; for all that we like to think we can conquer death through sheer force of personality, our mere descent alone strips away so much of who we were, who we thought we were, that when at last we've gotten where we're going, most of us can't even remember why we didn't want to get there in the first place.

The truism's true: It's a one-way trip. And giving everything we have away in order to make it, up to and including ourselves, is just the price—the going rate, if you will—of the ticket.

Why would I belong in Hell, anyway, even if it did exist? Sifting through what's left of me, I still know I was average, if that: Not too good, not too bad, like Little Bear's porridge. I mean, I never killed anybody, except myself. And that—

—that was only the once.

Three years back, and counting: An easy call at the time, with none of the usual hysterics involved. But one day, I simply came home knowing I didn't ever want to wake up the next morning, to have to go to work, and talk to people, and do my job, and act as though nothing were wrong—to see, or know, or worry about anything, ever again. The mere thought of killing myself had become a pure relief, sleep after exhaustion, a sure cure after a long and disgusting illness.

I even had the pills already—for depression, naturally; thank you, Doctor. So I cooked myself a meal elaborate enough to use up everything in my fridge, finally broke open that dusty bottle of good white wine someone had once given me as a graduation present and washed my last, best hope for oblivion down with it, a handful at a time.

When I woke up I had a tube down my throat, and I was in too much pain to even cry about my failure. Dehydration had shrunk my brain to a screaming point, a shaken bag of poison jellyfish. I knew I'd missed my chance, my precious window of opportunity, and that it would never come again. I felt like I'd been lied to. Like I'd lied to myself.

So, with a heavy heart, I resigned myself once more—reluctantly—to the dirty business of living. I walked out the hospital's front doors, slipped back into my little slot, served out my time. Until last week, when I keeled over while reaching for my notebook at yet one more Professional Development Retreat lecture on stress management in the post-Millennial workplace: Hit the floor like a sack of salt with a needle in my chest, throat narrowing—everything there, then gone, irised inward like some silent movie's Vaseline-smeared final dissolve. Dead at 29 of irreparable heart failure, without even enough warning to be afraid of what—

Am I the injured party here? I hover, watching, inside and out; I can hear people's thoughts, but that doesn't mean I can judge their motives. My only real option, at this point, is just what the angels keep telling me it is: Move on, move on, move on. But I'm not ready to do that, yet.

There were five of us in the morgue, after all, but the body snatchers only took two for her to choose from. And of those two . . .