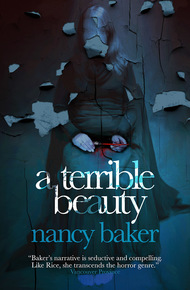 Nancy Baker is a Toronto author who has written some of the first and most beloved and well-reviewed vampire novels featuring Canadian settings and characters. She has also published a collection of short stories (Discovering Japan). Her novel Cold Hillside was released by CZP in the fall of 2014.

A Terrible Beauty by Nancy Baker

"Will you give me your blood to drink, though you die of it?"

In an unexpected twist on a fairy tale, an artist goes into the wilderness to fulfill his father's debt and finds himself the prisoner of a dangerous, alienly beautiful monster.

Nancy has a knack for breaking your heart in her novels. I'm so pleased we're including this beautiful and strange book here. A take on "Beauty & the Beast," this is actually the author's own favourite of all her books. It's a vampire novel—and it isn't. It's a love story—sort of. It's a fairy tale turned on its head that invites us into a gorgeous, lush, grim world, with compelling characters and storytelling at its best. – Sandra Kasturi

The letter lay among the others on the hall table for three days. Then the housekeeper moved it to his desk, where it sat for three more, awaiting his return from the sanatorium. When at last he shuffled into his study to sit at his desk, it ended up at the bottom of the pile, under the latest Journal of Archaic Languages and more promising missives from colleagues around the world.

Simon Donovan read for a long time, submerging himself in the pleasure denied him by uncompromising doctors and anxious nurses. In the realm of letters and language, in the world of scholarship and theories, there was no room for weak hearts and labouring lungs. Reality only returned when he rose to fetch a text or reference from the bookcases that lined the walls of the study. Then he would hear his joints creak and the harsh inhalation of his breath, very loud in the quiet room. When he reached towards the upper shelves, something in his chest would twitch and throb. The sensation always surprised him. The various betrayals of his body had been a long, slow process that his mind could never seem to remember from one manifestation to the next.

When he set aside the journal, it was to discover darkness waiting beyond the circle of light from his lamp. He leaned back in his chair for a moment, rubbing at his forehead with two fingers. Beyond the window, a thin strip of sky glowed red, caught between the peaks of the roofs across the street and the lowering dusk. He heard voices from the street and the distant toll of the cathedral bell. They will be here soon, he thought. Time to be dressing for dinner and rehearsing his litany of reassurances and platitudes or practising a paternal reprimand in case things got out of hand.

He smiled slightly. Things did tend to get out of hand. They always had, which had no doubt contributed to the amount of time he had spent in his study over the years. Anna had been able to take it all in stride, of course. She could arbitrate disputes with the wisdom of Solomon and both the victor and the vanquished were won over with cookies and kisses. Though, of course, that had been many years ago now. More years than he cared to contemplate had passed since his family had discovered, to their sorrow, that not all things could be cured with cookies and kisses. The magic of such talismans had long been lost to them, lost even before the keeper of them had been.

He thought of his sons, making their way across the city towards him. Peter would be driving. Wife safely absorbed in one of her seemingly endless rounds of social events, children put to bed by the nanny, his eldest would no doubt be here first. Gabriel would hire a cab, as usual. Matthew might as well, unless he had spent his meagre earnings on things far less practical than transportation. If it was one of what he referred to as his "poor periods," he would likely cadge a ride from Gabriel or take the trolley to the nearest stop and walk the rest of the way.

Simon looked back at his desk. From beneath the sober covers of the Journal of Archaic Languages, a thin oblong emerged. He reached for it idly, another excuse not to rise from the creaky comfort of his old chair.

The envelope was of heavy ivory paper. There was no return address, only the postmark of a town of which he had never heard. He saw the handwriting on the face and turned the envelope over hastily, aware of a twinge somewhere deeper than his heart. A dollop of crimson wax sealed the envelope, an archaic gesture that did nothing to relieve his sudden anxiety. Pressed deep into the bloody blot was the letter "S" in curving script.

Simon licked his lips, his mouth tasting as dry as dust. He turned the envelope in his hands again and forced himself to consider the handwriting. It had been more than twenty years. More than twenty years since he had expunged every trace of that hand from his files . . . and his heart. How could he be sure now that he knew it? Most likely, the letter was from some innocuous friend or acquaintance, newly enamoured of an old custom of correspondence.

He looked out the window at the narrow line of red outlining the roofs. His fingers touched the seal. There was still time to be rid of it. If the jumble of torn envelopes in his wastebasket would not do, the fire burning low on the far side of the study would. Burning would be better, certainly. Then, though he might wonder what secret lay inside the envelope, he would never be able to know. Throwing it out, even tearing it up, would make it far too easy to change his mind and succumb to curiosity.

The seal cracked beneath his fingers. The initial step taken, he had no choice but to go on. He lifted the flap of the envelope and drew the single sheet of folded paper out into the light. There was no writing on the outside, though he could see the faint outlines of the ink inside as it bled through the paper. Knowing that he was committing himself irrevocably, he unfolded the letter.

It took only a few moments to read it. She had always had an admirable economy about her sentences, he thought absurdly and read the words again. And then a third time, to be certain. Brief fancies flickered through the back of his mind. It was a hoax. She was not serious. But she had always been as serious as she was articulate.

Far away, the doorbell tolled. He heard the door open and the murmur of voices. Someone called his name.

He looked up from the letter and saw that the sun had disappeared.

There were footsteps on the stairs and a knock on the door. "Dr. Donovan?" Mrs. O'Brien's voice came, muffled by the thick oak door of his sanctuary. "Dr. Donovan, Mr. Peter is here."

Simon Donovan stared down at the letter in his hand. The words ceased to mean anything, the writing changing from the language he knew to the angular strokes of the ancient tongue with which he had struggled all those years ago. "Sidonie," he said softly, for the first time in twenty years. "Sidonie."