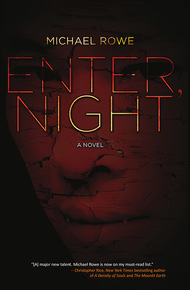 Michael Rowe was born in Ottawa, and has lived in Beirut, Havana, and Paris. He is the author of the novels Enter, Night (2011), Wild Fell (2013), and October (2017.) A French edition of Wild Fell was published by Editions Bragelonne in Paris in 2016. An award-winning journalist and essayist, he is also the author of the nonfiction books Writing Below the Belt (1995), Looking For Brothers (1999), and Other Men's Sons (2004.) He has won the Lambda Literary Award, the Queer Horror Award, and the Randy Shilts Award for Nonfiction. He has been a finalist for the National Magazine Award, the International Horror Guild Award, the Sunburst Award, and the Shirley Jackson Award. He was for 17 years the first-tier Canadian correspondent for the legendary horror film magazine Fangoria, which he credits as the best job he ever had. As the creator and editor of the anthologies Queer Fear (2000) and Queer Fear 2 (2002), Clive Barker hailed him in as having "changed forever the shape of horror fiction forever." He lives in Toronto with his husband, Brian McDermid in a Victorian house near an ancient graveyard.

The year is 1972. Widowed Christina Parr, her daughter Morgan, and her brother-in-law Jeremy have returned to the remote northern Ontario mining town of Parr's Landing, the place from which Christina fled before Morgan was born, seeking refuge. Dr. Billy Lightning has also returned in search of answers to the mystery of his father's brutal murder. All will find some part of what they seek—and more.

Built on the site of a decimated 17th-century Jesuit mission to the Ojibwa, Parr's Landing is a town with secrets of its own buried in the caves around Bradley Lake. A three-hundred-year-old horror slumbers there, calling out to the insane and the murderous for centuries, begging for release—an invitation that has finally been answered.

One man is following that voice, cutting a swath of violence across the country, bent on a terrible resurrection of the ancient evil, plunging the town and all its people into an endless night.

The movie tag-line for this novel is: "A Canadian Salem's Lot, eh?" Classic old-school vampires (no sparkling!) and other monsters inhabit Rowe's masterpiece of terror. A widow, her son, and her gay brother reluctantly return to their childhood home, where their wealthy mother and matriarch of the small town of Parr's Landing awaits them. As does an ancient evil. Both will begin their emotional torments anew. Sometimes the human monsters are worse than the supernatural ones. – Sandra Kasturi

Jim Marks, who had been driving for Northern Star for twenty-five years and would retire early at the end of October, looked sourly at this late arrival. He was tired of waiting and wanted to get the trip underway. It was a long one, and boring. The total driving time would be nearly eighteen hours. There would be a refuelling and dinner stop in Toronto at five p.m. and another in Sudbury later that night. He wished he'd joined one of the majors years ago, bus lines like Greyhound or Voyageur Colonial, with normal, civilized hours and routes instead of old charter dinosaurs like Northern. He was too old for this job. He felt every one of his forty-eight years tonight, and his ass in the driver's seat felt ninety.

"Ticket," Jim grunted, extending his hand. The vampire gave him the ticket. Jim tore off the driver's half and handed the remaining portion back.

Jim, of course, didn't see a vampire. He saw a filthy hippie.

In fairness to the vampire, any man with hair below his collar looked like a filthy hippie to Jim Marks. The world was crazy. Between the hippies down in the States and that commie Jane Fonda carrying on over in Viet Nam and all the drugs and weird music—never mind the fact that you couldn't tell the boys from the girls anymore—the planet was going to hell in a handbasket. If Jim Marks was the Prime Minister of Canada, the first thing he'd institute was mandatory haircuts for every male over the age of five.

The vampire took the ticket and moved down the aisle. His hockey bag banged against the metal armrests a couple of times. Jim resisted the urge to tell him to be careful. There was nothing to be careful of, but the metallic noise was annoying and Jim already had a headache and a long night drive ahead of him.

None of the other passengers noticed the vampire as he passed. No one notices anyone on buses unless they are exceptionally beautiful or handsome, or dangerous-looking, or extremely fat—in which case the potential seatmate can look forward to a very long, very uncomfortable ride. The vampire was none of these things. He was entirely nondescript—a bit more dishevelled-looking than the average bus passenger, maybe a little dirty, but not remarkably so for a passenger on a night bus through the mining towns of northern Ontario. He seeped into his seat near the back of the bus like cigarette smoke and settled in for the ride north. For all intents and purposes, he might have been a ghost—felt rather than seen, whose passage might have been marked at most by a momentary waft of air. Or, marked by nothing at all. He wasn't sure what people felt as he passed, but he did like to imagine the worst.

In his seat near the back, the vampire covered his eyes with the brim of his cowboy hat and laid his head against the window. He closed his eyes and tried to sleep. If he slept, he would dream. If he dreamed—as he now could again, since he'd stopped taking the pills that flattened out his thoughts, rendering his movements turgid and his dreams uneventful and quiet—the voice would come to him and tell him what to do next. The voice did come to him, and he smiled in his sleep as he listened.

In Toronto five hours later, the vampire got out and stretched his legs. It was raining.

He ordered a hamburger, fries, and a Coke at a greasy spoon on Edward Street, not far from the bus depot, so he could keep his eye on it. He left his hockey bag on the seat, knowing that no one would look inside. He looked through the windows of the diner and watched the cold sluice down, dirty waterfalls of greasy urban soot against the glass. His gaze flickered up to the darkening argentite sky. The rain was intensifying. By his calculations—and he was nothing if not obsessively fastidious about facts—the moon had been ninety-seven percent full last night and would be entirely full when it rose tonight, and remain so through Saturday as he completed his voyage north. While the rain and clouds might try to hide it, the full moon would still be there. The vampire would know. He'd feel it rise and he would grow stronger and stronger.

When the vampire was finished eating his hamburger, he took out the paperback novel he always carried in the side pocket of his army surplus coat with the intention of reading it to pass the forty-five minutes until it was time to re-board the bus.

He patted his pocket, feeling an unfamiliar bulge there, and frowned. He'd forgotten he still had the fucking things. He looked around to make sure no one was watching, and then he took the grimy, nearly full bottle of pills out of his pocket, squinting to read the label. With a ragged thumbnail, he scratched off his name. Then he carried the Thorazine to the garbage can near the door of the diner and tossed it in. He glanced about again to make sure no one had noticed him. Of course no one had noticed him. They never did.