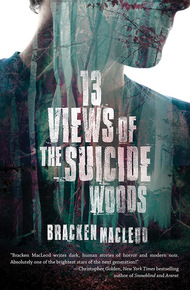 Bracken MacLeod is the author of Mountain Home, White Knight, and most recently, Stranded, which has been optioned by Warner Horizon Television. His short fiction has appeared in several anthologies and magazines including Shock Totem, LampLight, ThugLit, and Splatterpunk. He has worked as a trial attorney, philosophy instructor, and as a martial arts teacher. He lives in New England with his wife and son, where he is at work on his next novel.

13 Views of the Suicide Woods by Bracken MacLeod

From the author of Mountain Home and Stranded, comes Bracken MacLeod's first collection of short stories.

These stories inhabit the dark places where pain and resignation intersect, and the fear of a quiet moment alone is as terrifying as the unseen thing watching from behind the treeline. In the titular story, a young woman waits for her father to come home from the place where no one goes intending to return. A single word is the push that may break a man and save a life. The members of a winemaking community celebrate the old time religion found flowing in the blood of the vine. A desperate man seeking a miracle cure gets more than a peek behind the curtain of Dr. Morningstar's Psychic Surgery. A child who dreams of escaping on leather wings finds rescue in dark water instead. Looking back over a life, a homeless veteran must decide to live in the present if he wants to save his future. In a Halloween Hell house, a youth pastor must face the judgment of a man committed to doing the Lord's work. Fiery death heralds the beginning of a new life. A man who has been carrying pain with him his entire life gives up his last piece of darkness. And a still day beneath the sun illuminates the quiet sorrow of the last feather to fall.

The first story collection from the author of Stranded and Mountain Home. When we asked for a quickie tag-line for this book, Bracken said, "Sad. So sad. Oh, and devil worship." Quiet, heartbreaking stories full of darkness, and sometimes light. But light that comes at a high cost. Beautifully written, moving, not to be taken all at once, but savored slowly, like the finest, deepest red wine. – Sandra Kasturi

The morning breeze passed between the blanched, lifeless trees rising like fractured bones jutting from the forgotten marsh. The only sign of its passing, a light and silent ripple on the surface of the shallow water. The clear sky reflected brightly, blue above and blue below. The facets of the wind on water sparkled like diamonds in the light. A lone blue heron sailed from its nest, searching for something to eat, unconcerned with the line of traffic creeping by a hundred yards away. Drivers sat in their cars with the windows up and radios tuned to the recap of last night's game at Fenway or NPR or empty morning talk, paying no attention to the wetlands beside them, staring ahead, squinting against the rising sun as they ate, shaved, checked e-mail, made calls, and put on makeup. All focused on the road ahead, the day ahead, the growing anxiety of sitting still with so much to be done. Not a single one looked toward the trees or the water. They were blind to the calm and elegant wood that had once been living trees growing up over a hundred years. Before they were born, before the road was built, there was the fen and the trees and the water and sun above shining on it all.

The heron flew back to its nest unnoticed.

The woman lay in the water, unseen.

She rested on the far side of the fen, as bright as the day and silent as the water. As beautiful and broken as the trees. A gentle halo of algae that would eventually overtake the entire surface danced around her bare shoulders and thighs. It caught in her golden hair and the deep red cuts rent in her flesh. It gently painted her pale skin green. The sun warmed her and kissed her with quiet light. Her body accepted the gifts it was able to receive.

The radio voices moved on to other subjects and traffic crept forward and she lay still in the water as life all around her thrived. The algae in the water grew. The bacteria in her gut started the process of breaking down her organs. Insects waking to the growing heat of the day lazily crawled over her skin searching for a dark, fertile place to lay eggs and give life to new generations that would need what the woman offered to thrive. A fish slipped through the water near her, catching the sharp eye of the heron above keeping watch. And the people in their cars breathed warmed air and ate cooling food out of paper bags never thinking that tomorrow and tomorrow and tomorrow again might never come for them. That a truck might crush their bodies, a sudden disease could lay them low, that another one of them might open their skin and veins to the air and let life leak out onto a lonely mattress in a dark room, unseen and secret. No one woke up thinking that all there ever would be in their lives was behind them—not unless they had already been dying for a long time. The day and the city and the drive home that night and the next commute to work the morning after were always ahead. The sun was always in their eyes.

A small snake slipped past her, gliding into the water mirroring a line of ink in her skin. The blurred gray design arced into a once graceful feather curving along the small of her back as if the last of her wings had fallen away leaving only the hint of the light being she had once been. A woman who flew in her imagination, dreaming of a life above the clouds, living in the stars shining brightly, sparkling for the people below gazing at her beauty and radiance. But the once crisp and delicate lines had fattened with age and her airy feather became a leaden reminder of the years.

The day grew long and the sun moved above her before falling behind. The heron ate and rested and then worked its nest. The snake swam and slithered and warmed itself on a rock. The algae spread, bacteria fed, and the insects made a home for their children in and all around her.

And she lay waiting for that one set of eyes to glance toward the teeming life all around and see her.

All her life waiting to be seen.