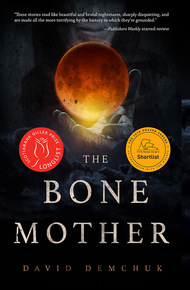 David Demchuk was born and raised in Winnipeg and now lives in Toronto. He has been writing for theatre, film, television, radio, and other media for more than thirty years. His publications include the short-fiction cycle Seven Dreams, and the Lewis Carroll adaptation Alice in Cyberspace, and appearances in the anthologies Making, Out!, Outspoken, and Canadian Brash. His reviews, essays, interviews, and columns have appeared in such magazines as Toronto Life, Xtra, What! Magazine, and Prairie Fire, as well as the Toronto Star. Most recently, he has been a contributing writer for the digital magazine Torontoist. The Bone Mother is his first novel. It was recently long-listed for the prestigious Scotiabank Giller Prize, as well as shortlisted for the Amazon Canada First Novel Award, and the Kobzar Award, as well as being a finalist for the Shirley Jackson Award. It was also longlisted for the The Toronto Book Award, and was the winner of the Sunburst Award.

The Bone Mother by David Demchuk

Three neighbouring villages on the Ukrainian/Romanian border are the final refuge for the last of the mythical creatures of Eastern Europe. Now, on the eve of the war that may eradicate their kind—and with the ruthless Night Police descending upon their sanctuary—they tell their stories and confront their destinies:

•The Rusalka, the beautiful vengeful water spirit who lives in lakes and ponds and lures men and children to their deaths;

•The Vovkulaka, who changes from her human form into that of a wolf and hides with her kind deep in the densest forests;

•The Strigoi, a revenant who feasts on blood and twists the minds of those who love, serve and shelter him;

•The Dvoynik, an apparition that impersonates its victim and draws him into a web of evil in order to free itself;

•And the Bone Mother, a skeletal crone with iron teeth who lurks in her house in the heart of the woods, and cooks and eats those who fail her vexing challenges.

Eerie and unsettling like the best fairy tales, these incisor-sharp portraits of ghosts, witches, sirens, and seers—and the mortals who live at their side and in their thrall—will chill your marrow and tear at your heart.

What if you fled the war-torn Old Country for the New World? But it turned out your haunted, storied past and its attendant ghosts (literal and figurative) came with you? What would happen then? A novel in stories, the author takes you on an eerie journey through Eastern European folklore, and its attendant heroes and monsters (who may be one and the same). Longlisted for the Scotiabank Giller Prize and Toronto Book Award. Shortlisted for the Shirley Jackson, Amazon First Novel, and Kobzar Book Awards. Winner of the Sunburst Award. There is literally no room left on this book cover for more award stickers. – Sandra Kasturi

My brother Sergyi and I were married in a small ceremony in our village church. Such things were possible then that now are not. This was in the years before the war, during the movchanya, what some call the silence, or the blight. We were farmers, our families too poor for us to be considered by the very few women our age. And we were good companions, and had been intimate since we were children. And so our bond was blessed.

Shortly after, we received the notice, and Sergyi left our farm to work at the thimble factory, as our father had when we were very small. Seventeen months later, Sergyi fell ill from pneumonia and died. The car from the factory arrived to take us to the funeral, but Mother refused to go. She instead asked that we hold a remembrance in town. The factory could not deny us this, but of course would not provide the body. He would be buried in the small graveyard just outside the factory gates. No matter. We held our own memorial. Our mother sat with me at the service, an arm's length from where Sergyi and I had stood before the priest.

She reached over and squeezed my hand. "You may pass slowly through a valley dark and drenched with tears, but you must not rest there," she said. "These things happen."

Within two days, I received word from the thimble factory that I was to come and fulfill Sergyi's five-year contract, which had three years and seven months remaining. This dismayed my mother, who would be left to tend our farm with her aged sister, whose entire being had curled into the shape of a claw. But it was an inevitability. My mother pleaded with me to stay with the farm, and offered to send herself in my place. This would not be accepted, as we both knew. The work was difficult and arduous, and unsuited to an elderly woman. I offered to send her money to hire a hand but she refused. She would have no other man on the farm but me.

We sat and ate our supper, a pale broth of cabbage and potato with scattered shreds of mutton drifting through it. I feared the meal would be our last together. The next morning, letter in one hand, a pasteboard valise in the other, I hired a driver to take me out into the countryside and up to the factory gate.

While the Grazyn Porcelain Factory also produced fine china for homes, hotels, and restaurants, near and far, it was celebrated the world over—as we in the village were frequently told—for the exquisite porcelain thimbles that had been manufactured for centuries using closely guarded techniques developed by the Grazyn family. Every tsaritsasince Anastasia Romanovna had received a priceless Grazyn thimble as part of her wedding trousseau. The factory produced only three hundred and thirty thimbles a year, each painstakingly formed from a special paste, then glazed and fired by hand. The workers lived there, ate there, slept there, for the duration of their contracts, and were then sent home with lifelong pensions—enough to clothe and house and feed their now-estranged families.

I recalled as I rang the bell that I had known many such workers over the years, but that none had ever spoken of their time there. Even our father was silent on the matter, and we learned early on not to raise the subject.

After a moment, the door opened, and I was ushered inside. My belongings were taken from me, and I was led to a locker room where I was handed a pair of grey overalls, a fine-fitting pair of lambskin gloves, a kerchief for my hair and a cotton mask for my face. I changed and was taken to the factory floor, given a curt cursory tour of the front of the factory, where the thimbles emerged from the kiln, ready to be glazed and fired. Then, wordlessly, I was taken into the back of the factory. It was filled with boxes and crates and bins of human bones, boiled and scrubbed and gleaming.

Across the room, two men shovelled the bones into a huge metal grinder where giant stone burrs crushed them into coarse powder. The powder was sent through a series of furnaces, sifted and combed and ground between each, until what emerged at the end was a trickle of fine white ash.

The Grazyn family had provided our livestock and produce, chosen our grains, paid for our doctors and medicine, built and repaired our housing. They had given us our schooling, our training, our church, our cemetery. And not just for our village, but two others besides.

We all had been raised and fed and nurtured to become these bones.

"Sergyi was with the shovellers," my guide said to me in a dry, distant voice. "We need three, or we fall behind. You must take his post. Can you do the job?"

"I can," I said. I reached for the shovel hanging on a nearby hook—his shovel, I realized—and took my station, and went to work.