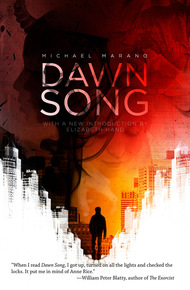 Former Punk rock DJ, bouncer, male model, and radio producer Michael Marano is a horror, dark fantasy and science fiction writer, with works in anthologies such as The Mammoth Book of Best New Horror 11 and Outsiders: 22 All-New Stories from the Edge. His first novel, Dawn Song, garnered the Bram Stoker and international horror Guild awards. Stories From the Plague Years, a collection of Marano's new and reprinted short fiction, was named one of the Top Ten Horror releases of 2011 by Booklist. His novella Displacement was nominated for a 2011 Shirley Jackson Award. Since 1990, he has been reviewing movies for the Public Radio Satellite System program Movie Magazine International, produced in San Francisco and syndicated in more than 111 markets in the U.S. and Canada. He teaches at Grub Street, a non-profit creative writing centre.

A modern dark fantasy classic returns with this new, Special Edition of Dawn Song, the soul-haunting novel from a Bram Stoker Award-winning author with a deeply powerful—and prescient—vision. Set in Boston at the start of the First Gulf War, a larger, supernatural battle for Supremacy in Hell takes shape . . . but plays out on a personal scale as unassuming humans careen into the path of a beautiful, terrible Succubus who has come to Earth to do her Father's bidding.

Lawrence, a lonely book clerk, new to Boston, is just one wanting soul in a city full of them. His deepest desires call out to someone . . . anyone. But who will answer among the faceless crowds? A grieving son, a theology student tormented by doubt, the faithful, the mad: all are touched by the divine as the Succubus, who is both ancient and newborn, falls in love with the city even as she reaps the souls of her lovers. Her journey through our world comes at an unimaginable price. For in Hell, two powerful deities have awakened to use mankind as pawns in a monstrous conflict that will change the nature of damnation itself.

In the iconic horror tradition of Clive Barker and Anne Rice, as well as of newer fantasy voices like Mike Carey and Tim Powers, Dawn Song is a dark meditation on Salvation, full of terror and tenderness.

A dark fantasy classic from a Bram Stoker Award-winning author. A supernatural battle for the supremacy of Hell takes place, as various humans become unwitting pawns, but are touched by the divine—a succubus who falls in love with the city of Boston, even while taking the souls of her lovers. For fans of Clive Barker and Anne Rice. With new introductions by Elizabeth Hand and Dietmar Dath, and an afterword from the author himself, this seminal work is not to be missed. – Sandra Kasturi

Lawrence and the Succubus were not drawn to Boston, but carried—like two branches dropped into a swift river. Taken by the same currents and eddies, they eventually piled upon the same embankment. Inevitability, not Fate, caused their lives to become so intimately intertwined.

For both of them, Boston was less an earthly place than a vital idea; it was their focus, the site they each believed would be their place of growth and personal fruition.

The Succubus was newly born, nurtured by the loving care of a horned prince from the pummeled soul of a camp-following whore (who had, in fleshy life, serviced one of Napoleon's best officers). With skilled hand and eye, like a master jeweler, he fashioned his child from this twisted spirit, purifying and distilling her to the fog-translucent whiteness of a glistening manes, then burning and sculpting this ghost of a once human thing into a crimson-skinned siren—her form holding the secret fire of cinnabar and the muted light of a November sunset.

Her creation was the alchemical translation of a rose into human form, the infernal transubstantiation of almost undefinable beauty into something alive, breathing, with thought. Her beauty touched the Lesser Furies with mute jealousy and rage. She, who had been one of their charges, soot-blackened and shit-smeared, corrupted to near liquid debasement under their merciless authority, now sat coddled on the lap of their Lord, tasting the sulfur-sweet perfume of his breath and skin. They would have set upon her and rent her, returned her to her despoiled state, were it not for their fear of him.

The Succubus loved her Lord and Patron, and sought to achieve great things in his honor. Thus, she came to the Living World to attain a Name, a rare distinction to be granted upon her taking the soul of her twentieth lover, one for each of the angelic spheres separating the deepest pit of the Abyss from the Throne Room of God. As a mystic would ascend such spheres through meditation and prayer, she would ascend through blasphemy and death, baptized and fulfilled by the salt-tears of human lamentation and grief.

For her, Boston was a garden of puritanical hypocrisy, a perfect, nurturing environment for the stifled desires that would feed her and make her whole.

Lawrence, too, was in search of a name, an identity free from that which had been imposed upon him. Out of need, he severed his ties to Providence, his birthplace, and to Jacob, his ex-lover.

He despised Providence for its insular mentality, for its gay-bashing, blue-collar sense of Catholic propriety. The city had been a prison for him since childhood. As for Jacob, Lawrence did not hate him so much as the web their relationship had become. They had been lovers since adolescence, and Lawrence had grown beyond the teen-aged mindset that had brought them together. Jacob had made clear his need for Lawrence not to grow, and the resulting arguments were hurtful and bitter. Words were said in anger which were not meant, and later, apologies were given without sincerity.

Their relationship died with autumn's leaves, and Lawrence left the apartment they had shared and moved back to the home he'd sworn he'd never return to. As the soil hardened with frost, and the grass withered to a dead brown, Lawrence found the strength, and the desperation, he needed to re-define his life. The realization had dawned on him, as he felt himself again forced into the role of the ridiculous child his family needed him to play, that the prison Providence was to him in part a thing of his own creation.

He could walk away.

For Lawrence, Boston was a center of cosmopolitan sensibilities, a world-class city where he would not have to stay closeted, no longer have to fear being assaulted for who he was or what he wished to be. Boston offered him the freedom and self-realization he had earned.

And so it happened that Lawrence moved into the brownstone by the Charles River one snowy night some weeks before Christmas, and the Succubus settled in on the roof above the next evening, during the quiet hours just before dawn.