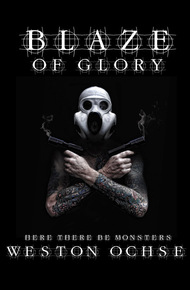 WESTON OCHSE is a writer of nearly thirty books in multiple genres. His young adult novel Ghost Heart, co-written with Yvonne Navarro, has been compared to both The Dark Tower and Something Wicked This Way Comes. His military supernatural series SEAL Team 666 has been optioned to be a movie starring Dwayne Johnson and his military sci fi trilogy, which starts with Grunt Life, has been praised for its PTSD-positive depiction of soldiers at peace and at war. Weston has also published literary fiction, poetry, comics, and non-fiction articles. His shorter work has appeared in DC Comics, IDW Comics, Soldier of Fortune Magazine, Cemetery Dance, and peered literary journals. His franchise work includes the X-Files, Predator, Aliens, Hellboy, Clive Barker's Midian, and V-Wars. Weston holds a Master of Fine Arts in Creative Writing and teaches at Southern New Hampshire University. When he's not being deployed to Afghanistan, he lives in Arizona with his wife, and fellow author, Yvonne Navarro and their Great Danes.

Blaze of Glory by Weston Ochse

For fans of Stephen King, David Gerrold, and Richard Matheson, picture this: the world is being eaten by monsters and there’s nothing you can do about it.

This novel also contains an essay called and The True Adventures of a Monster Screenplay in B-Movie Wonderland, which tells the tale of how the screenplay based on this novel was almost sold to Wesley Snipes, with many of the industry’s top horror movie stars attached to the film.

4 WEEKS AGO
Everything seemed fine. Life was as we knew it. Nothing was out of place.

3 WEEKS AGO
The first tiny creature, no bigger than a thumb, crawled out of the dark loamy earth of an Iowa corn field.

2 WEEKS AGO
Creatures came from the ground in every country, from the smallest maggot-sized killer, to Cadillac-sized devourers, each one eating everything in sight, their apparent desire, to cleanse the earth of any vestige of mankind.

2 DAYS AGO
Our hero, Buckly Adamski, watched the Governor of North Carolina start to dance and go crazy on the television, it wasn’t until the very end that the television announcer blew his brains out over the impossibility of it all.

YESTERDAY
Planes crashed to the ground, the Eiffel Tower crumbled, trains stopped running, the power went out, and the entire human race (what was left of it) paused to take a breath, wondering if it would be their last.

TONIGHT
Buckley gathered those he could save in the penthouse of an old building in downtown Wilmington, North Carolina. Monsters are eating the city around them. They know they must leave. They know they have to make a run for it. But they also don’t want to die.

And there is an answer, but it will come from the craziest of places.

Buckley stalked into the kitchen and grabbed a bottle of vodka from one of the many cases stacked along one wall. He jerked out a chair and sat cowboy style. His hands began to shake as he spun the cap. Buckley concentrated on getting drunk, the image of Sally Struthers’ ravaged body chiseled upon his memory. No one should ever die like that. He drank long and deep.

Buckley opened one eye, the rush of alcohol scouring his system. He opened his mouth to speak, but decided the effort was too much. He nodded and worked his lips into what he hoped was a believable smile.

Little Rashad, wearing a shirt that read Wright Brother’s Band Camp, didn't return the smile. Instead, he bit his lip to keep it from trembling. His eyes swam with unreleased tears. "Sally? Is she dead, mister?"

Buckley left the bottle on the table and held out his arms, mentally kicking himself for not thinking of the kid. The woman had saved the boy and was probably the closest thing he’d had for a mother except the old whore, Gert, or Sissy, who’d probably never changed a diaper.

The boy ran into his arms and sobbed.

"Did you shoot her?"

"Just barely, son," Buckley said, remembering his clear view of Sally’s gnashing teeth through the hole her cheek had once filled and Maggies dancing disco where her tongue had been. "She was just real scared is all." He eyed the bottle and squeezed the boy tighter. "Real scared."

The rattle of a lonely sob shook the boy’s chest. Buckley rubbed Little Rashad’s back with his large hands and then pulled him away from his shoulder, holding him at arm's length.

"All right now. That's no way to be. I'm Irish you see? And we don't cry at funerals. We celebrate the person's life.” He shook Rashad gently. “It's called a wake son. Do you understand what I’m saying?"

The boy eyed him suspiciously. "You ain't Irish. You're black like me. And Polish too. Sally told me when I asked about your name."

Buckley grinned. "Sally was right on with her info, little man. I was the only Black Irish Pollack on the entire staff of the Wilmington Public Works Department." He leaned in close and spoke conspiratorially. "What good old Sally didn't know to tell you was that my Daddy's mother was pure Irish. She had red hair if you could imagine, flaming red hair that caught the eye of my grandpa right off. But don't tell no one because people are prejudice against Irish people. Don’t want someone being prejudiced against me, you know."

Buckley grabbed him by his shoulders. "My mother also liked poetry. Do you read poetry? Did your mommy and daddy read you poetry?"

The boy shook his head. At the mention of his mom and dad, a tear sprung in the corner of his eye and welled there.

The boy shook his head again. His lip had stopped quivering and his whole attention was on Buckley.

"Let me see if I can remember." It had been a while since he'd recited the poem. Somehow he was able to pry it loose from all the recent bad memories. Here you go--

Do not go gentle into that good night,
Old age should burn and rave at close of day.
Rage, rage against the dying of the light.

Say it with me, Rage, rage against the dying of the light."

"Know what they mean?"

The boy shook his head.

"It's easy boy. The trick with poems is that everything is symbolic. What someone says isn't always what they mean. Take light for example. The light is life. Rage means to fight. And night means death. So do not go gentle into that good night, means don't go towards death. Rage against it. Fight it. Fight the dying of the light."

The boy blinked and nodded slightly.

"Exactly that, boy. Rage against the dying of the light." Buckley took a swig from his bottle, returned it to the table, then held the boy back so he could look at his shirt. "So, it says here that you're in the band, huh?" Buckley felt his mouth slipping. The bottle was half empty and the dirge was upon him.

The boy stared back in confusion.

"That's right. Old Chuck doesn't play the trumpet. He plays that big bell thing. And even if he did, you’re probably too young to remember them. Still, I bet you can play real good, can't ya?"

"Maybe later boy. Maybe later we can scare those damned Maggies away with your playing. Maybe we can scare them right back to where they came from. Right now, though, we got some business to attend to. You and me are part of a wake. So what you drinking?"

The lean boy stared at the bottle of vodka for a moment then searched around the kitchen crowded with boxes from the restaurant and bar below. He spied a case of root beer, walked over, pulled a can out and popped the tab.

Buckley nodded sagely. "Good choice. Nothing like a good beer to toast a wake."

Little Rashad sat down next to Buckley and drank half the can down before pausing. He burped long and loud, looked nervously towards the front door, then slid closer to Buckley.