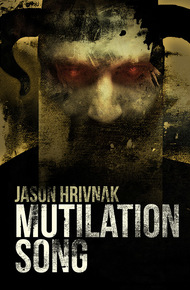 Jason Hrivnak was born and raised in Toronto. His first novel, The Plight House, was published in Canada in 2009, and had since been published in France. Mutilation Song is his second novel.

Thomas hears voices, and the worst of these voices belongs to a demon called Dinn.

In a series of increasingly horrific rants, the demon re-frames Thomas's declining mental health as a part of a secret training program, an occult procedure designed to cultivate the demons of tomorrow.

In the distorted world depicted by Dinn, gateways to hell lie behind every door. Friends and family are the enemy. And the only way for Thomas to survive his training is to dedicate himself to the demon's prescribed rituals of loneliness, ill health, and pain.

Equal parts ferocious and seductive, Mutilation Song is a boundary-shattering horror novel that uses a hallucinatory narrator to explore the extremes of mental illness.

Is Thomas possessed by a demon, or is he just losing his mind? Told by the ultimate unreliable narrator, Hrivnak's novel takes you on a strange hallucinatory journey until you're not sure what's real. Are you even reading this book? Exploring the themes of mental illness and the nature of existence—reader beware! This book is upsetting. – Sandra Kasturi

All through the night I'd stood by the bed, watching him while he slept. Every fleeting little twitch that passed over his face helped stimulate my desire to hurt him. I woke him an hour before dawn and ordered him to report for duty outside, told him to move in double time or else feel the force of my wrath. He'd been sleeping fully clothed, shoes and all, and he rose from bed wearing a haggard expression, the crestfallen look of one who's failed to awaken and instead moved laterally between nightmares. I began my assault by showering him with abuse, adhering to him like a malignant shadow as he crossed the darkened room. I told him that his face looked like roadkill. I told him that an intellect as puny as his own could only be the product of severe organic brain damage. In a kind of waking dream I showed him high-speed film-footage of a neocortex undergoing the process of ischemia, lesions flowering like scrollwork where the grey matter had necrosed. "Pretend that the building is on fire," I said. "Pretend that the floor is crumbling. Pretend what you like, but shake off your torpor lest in some spontaneous outpouring of disgust I eviscerate you where you stand."

He rushed from the roominghouse and stepped out into the street, a desolate early-morning calm hanging trucelike in the air. Down the block, past islets of late snow, a last few members of the local drug-dealing syndicate stood idle in territories of shadow, and a last few desperate users hurried to trade, seeking the doses of crack cocaine that would carry them through the dawn. I told him to make for the rail yards. "Total time elapsed," I said, "from reveille to your arrival at this first designated vector was more than twice the figure required in order to achieve a passing grade. If this represents your very best effort then I advise you to vanish down one of these alleys and open your veins this instant, for in that case you stand no chance whatsoever of surviving the ordeals to come." I'd warned him countless times already that down in the installations his dawdling would prove fatal, ensuring moreover that he was broken to pieces before attaining the comforts of the grave. "Trust that death by your own hand," I'd assured him, "will be gentler than death by mine."

I watched him closely as he shuffled down the street. He'd abandoned weeks earlier his last concession to hygiene and his appearance was darkening, assembling itself scabwise around an archetype of the common derelict. He was dirty and ragged and bleak of eye, discharging on all frequencies the despondency of a pariah, but despite the extent of his accumulated filth I still found him deeply disappointing. By such an advanced stage of the program I expect to see a trainee disfiguring himself both in body and in mind, auto-perverting so as to confront the day's torments with some black approximation of joy. I expect to see a flesh grown heavy with deformities as it sickens into its new vocation. His refusal to incorporate the available corruptions made him a bottom-tier candidate, worthless and almost certainly destined for the cull, but I drew little consolation from that fact. His unscarred flesh was a brazen insult to everything I held most dear, proof that the methods I'd employed to that point had not been sufficiently brutal. Throughout his journey across the darkened precinct I filled his ear with threats of annihilation, vowing anew to crush everything within him that was decent or commonplace or mild. I told him I that should not be at all surprised if he perished this very day.

As he emerged from the tangle of residential streets he put his hands in his pockets and leaned forward into the wind, a cold air scouring the deadlands that lined the western perimeter of the rail yards. The pedestrian bridge that spanned the tracks loomed gantrylike up ahead and he homed upon it without lifting his gaze as if preprogrammed in a dream. "You will suffer terribly today," I said. "Always remember that the ruptures I aim to induce are not ends in themselves but rather prerequisites for securing your entrance to yet higher levels of ordeal. Picture me opening your ribcage like a drunken surgeon. Picture me drawing out your bone marrow and replacing it with novel alloys of molten steel and slag. I know you still believe that you can fail your way back to the life from which I plucked you, but attachment to such fictions will only compel me to keep raising the index of your torments. Thus far you have failed me as no trainee has failed before you and the fault for everything that befalls you now is therefore entirely your own. Know that I consider your every misstep to be a plea for harsher treatment. Merely by waking in the morning, by continuing to draw breath, you acquiesce to a domain shorn of limits," I said.

He had not yet wept and I noted this with consternation, for it seemed that only yesterday I'd been able to break him within minutes of reveille, maintaining him for however long I pleased in a state of sobbing desolation. I closed my eyes and imagined myself standing over the broken bodies of all the trainees I'd murdered over the years: the corpses were piled thigh-high all around me and hidden beneath them a stream of warm decomposition ran silklike over my feet. I drew strength from this image and from the notion that his body might soon join these countless others, yet another piece of worthless refuse thrown atop the mouldering pile. When I opened my eyes the vision of carnage hung momentarily before me like muscled steam and through its dissipating substance I watched him climb the stairs to the surface of the bridge proper. As he crossed the span into the penumbra of the rail yards I felt a brief and delicious tension like the frisson before the kill, and once the darkness had swallowed him completely I smiled and breathed deeply of the polluted air, for he now stood within my domain. I knew that if I unleashed upon him the ordeals then dancing in my imagination he would last for only a few months, a half-year at most, but the prospect of his imminent destruction was one I found delectable nonetheless. Call it a measure of my own obsessions, my enslavement to a nightbound ideal. Given free rein I would cleanse this program of all rhythm and restraint and periodicity and instead submit every single trainee to an unremitting stream of horrors. I would devise an assault of dazzling ferocity—better to let the legion go unreplenished than admit even one candidate who bears the taint of the mundane—and exterminate them all.