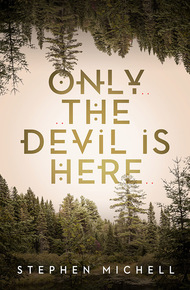 Stephen Michell is a freelance writer and editor based out of Toronto. His writing has appeared in The Good Men Project, as well as in the Exile Editions speculative fiction anthology Those Who Make Us, with his story "As Worlds Collide." He has also written many entertainment reviews for Step On Magazine.

Only the Devil is Here by Stephen Michell

When six year-old Evan is kidnapped from his foster home, he is dragged into a world of shadows, monsters, and fire. At first, all Evan can think about is how to escape from his violent captor, a man who calls himself Rook; but Evan quickly learns that Rook is the only person with the power to protect him against a host of more horrible dangers. As Rook's true nature is revealed through mysterious, magical acts, Evan must wonder if Rook is indeed a person or rather a monster himself.

Pursued across the wintery Southern Ontario countryside, with the baying of police dogs at their heels and deeper horrors lurking in the woods, the orphan boy and the roguish man begin to understand each other. Evan admits that he also has mysterious, magical powers, but doesn't know how to control them. Rook becomes more intrigued with the boy, and Evan, a child that has never felt at home, begins to believe in a place where he belongs—with Rook.

If Cormac McCarthy had written The Omen, it would read like this. Six-year-old Evan is kidnapped from his foster home and taken on a horrific road trip by the mysterious man, Rook, while pursued by supernatural agents. But Rook has powers of his own, and might be Evan's only true friend, protecting him against the forces—both angels and devils—that would use him for their own ends. – Sandra Kasturi

The boy lay under the kitchen table, tucked between an old cardboard box and the wall, hidden from the man who stood at the kitchen door.

The man wiped his hair back from his face. A fine sweat had broken over his brow, and he could feel the warm dampness on the back of his neck as well. He drew a long breath. The boy's foster father had fought hard, then desperately at the end. Considering the corpse, the man felt a slim measure of admiration. Then he stepped over it. The kitchen floor creaked.

From under the table, the boy saw the long tail of the man's coat and his boots as he crossed the room. There was blood on the toe of the right one. A dark shine. There were also smears of blood on the man's right thigh and knee, from where the foster father had slumped against him, but this the boy could not see.

On the stovetop, the frying pan hissed and spat grease. A fetid expulsion of steam. The smell of the hotdogs beginning to burn mixed with the apartment's odour of stale cigarette smoke and the result was sour. Another smell hung over all of it, bodily and rank. Like the grime on the edge of the toilet seat.

A glass bottle of ketchup lay smashed in the middle of the kitchen floor. The boy's foster mother had knocked it from the counter in her haste to defend herself. As the man stepped over the spill, the boy settled his gaze on the thick red paste, thinking it looked like the real thing. Not like the dark stuff on the stranger's boot. Not like the stuff that was starting to pool around his foster father's head. But how blood should look. Bright and thick, like on TV.

The boy's foster mother crouched in the corner of the kitchen below the edge of the counter. Her nose was running. The kitchen knife she'd used to cut up the hotdogs was gripped between white knuckles. It's sharp point, gleaming in the fluorescent light, jumped side to side.

The man stopped in front of the woman and looked down at her. His hair fell over his face.

The woman's hands trembled. She said nothing.

"I know he's here somewhere," the man said. "Call him. Tell him to come out."

Before the woman had a chance to say more, the man wrestled the knife from her hands and threw it across the room. It struck the pan from the stove and sent both to the floor in a splash of grease and smoke. The boy heard the clatter and jumped, then hunkered farther back behind the cardboard box.

Looming over the woman, the man yelled, "Where is the boy?"

When she said nothing, he lifted her by the shoulders and struck her across the face. She tottered and he struck her with the back of his hand and she fell to the floor.

"Do you want to end up like that?" the man said, gesturing to her dead partner.

"Go to hell," the woman said, her lips bleeding.

Under the table, the boy shut his eyes and tried to think about everything that was happening. He thought hard about his foster mother—Evie—picturing her face, and he tried to picture the stranger. He was trying to think about them in his other way, his special-thinking. Like he had on nights when his foster father would come home late, yelling and stinking of sweat and beer, and Evie would slam and lock the bathroom door. Sometimes on those nights, if the boy thought about them in his special way, he could make it all stop—

The man grabbed the boy's foster mother by the hair and she screamed. Her feet kicked out, and her heel slid through the ketchup on the floor. She was screaming no, no, no, as he started to drag her from the kitchen.

The boy looked out from behind the box, and for a moment he witnessed his foster mother's face, bright red, with the man's huge hand gripping a fistful of her hair.

Then she was gone, dragged over the body of her dead husband into the front hall. The boy covered his ears but still he could hear her screaming and screaming and then it stopped.

The boy uncovered his ears. He listened. Then he heard the stranger's footsteps again. He was crossing the front hall.

A door crashed open—the bathroom. The boy heard the shower curtain screech along the rod. Then footsteps again, across the hall and back through the kitchen and around the corner into the bedroom. Another door kicked in. A springy piece of furniture flipped and crashed.

The boy sat and listened and he could feel his heartbeat in his ears. He looked out at the feet of his foster father, dirty socks, greasy holes in the heels. He listened again to the noise of the man in the other room. The sound of metal hangers clanged and clothes padded into piles, then the loud crash of a shelf.

The boy crawled out from behind the cardboard box and squatted on the kitchen floor. He waited. His heart raced. He heard nothing in that breath. The other room was quiet.

The boy looked down at his foster father. Adam. A man the boy had once tried to call dad. Adam's eyes looked glazed over and empty now, the left was more bloodshot than usual.

There was another sudden crash from the other room and something slammed against the wall with a thud.

The boy sprang over Adam's dead body and into the front hall. He saw Evie slumped against the wall and stopped in front of her. Head hanging over her breast, hair a tangled mess. But unlike Adam, she wasn't empty. She was still alive. The boy's face softened with relief even as tears ran down his face.

Then he was running. Straight to the door.

The man heard the boy in the hall and rushed out from the other room. The boy grasped the doorknob in both hands and turned it. Just as he pulled the door open it slammed shut again, the man's hand pressed flat against it above the boy's head.

The boy looked up. The man loomed massively in his heavy, dark coat.

His long, blackish-brown hair hung over his face to his chin and mixed with the length of his beard. His mouth was small and hidden. Through his hair the boy glimpsed the man's dark grey eyes and a hardened, immovable expression.

They stood, poised one against the other, and then all at once the boy kicked out, aiming for the man's crotch, but his foot skipped off the man's shin. Reflexively, the man grabbed the boy by the neck and hammered him against the door.

The boy shook and squirmed, twisting his head as his face began to redden. His brown eyes widened and he gulped for breath.

The man recalled his instructions not to kill the child, but he couldn't bring himself to let go. He could feel the boy's manic throat contractions against his palm. If he held on much longer he would feel the bones and cartilage start to break, and the blood vessels in the boy's eyes would burst.

And yet he did not relent. Something was happening to the boy's eyes. At first the man thought it was only the eyeballs beginning to hemorrhage, but it was something else. He could feel it, and the sight was stirring him to anger. One moment the boy's eyes were brown, the next they had brightened to a light tan, and then, like a spark, the boy's eyes turned the colour of rust. A look of stark defiance flashed across his face.

The thought passed through the man's mind like a bullet, and his whole arm tensed with a renewed grip that nearly snapped the boy's neck. What anger stirred in him had sharpened into pure hatred. The boy's rust-coloured eyes bulged, and his face purpled. The man was set to kill him.

And then the boy blinked. All at once, the rusty hue vanished from his irises and they were brown once again. Brown and terrified.

The man saw it and almost gasped with a wave of self-repugnance. He was strangling a child. His anger rebounded and he loosened his grip and dropped the boy to the floor.