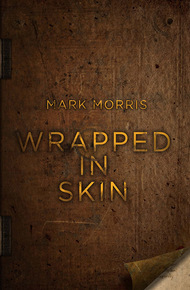 Wrapped in Skin by Mark Morris

A woman haunted by a mysterious upside-down door. A meeting between a famous punk rocker and a voodoo priestess. A group of friends who willingly place themselves in the path of bullets that travel through time. . . .

Mark Morris's stories are wrapped in strange skin. Skin suffused with regret and grief and anger. Skin that twitches with bad dreams and appalling memories. Skin that is so thin it is unable to prevent the terrors of the past from breaking through.

A wonderful collection by one of England's finest horror writers, on par with Clive Barker. Each story packs an emotional punch and is infused with the strange. What lies beneath the skin that seems so familiar? Mark Morris will show you. But be prepared: you might not see the things the same way ever again. – Sandra Kasturi

When the child screamed, Tess Morton felt guilty for having to repress the urge to snap at it. She was aware that it wasn't Matthew Bellings who should be punished, but his tormentors, and yet the boy's cry of pain or distress was so whiny that it grated on her nerves.

The reason she felt little compassion for the child was because she knew it took almost nothing to provoke a wail of complaint from him. Matthew would cry out whenever someone barged into him in the school corridor; whenever a football was kicked towards him in the playground; whenever a classmate flicked a paper pellet at him, or snatched a text book out of his hand, or pushed in front of him in the lunch queue. Indeed, the merest slight would cause Matthew's red-cheeked, strangely wizened face to crumple, his mouth to twist open and that familiar, toe-curling bleat to emerge.

Tess liked children; she truly did. Unlike many of her more world-weary colleagues, she was still young enough, and optimistic enough, to regard teaching as a noble and worthwhile profession. She looked back on her own school days fondly, and regarded many of her former teachers with great affection. And as such she liked the idea of feeding and enthusing young minds, of equipping her pupils for the trials of life that would inevitably lie ahead.

All of which made her feel doubly bad for the way she felt about Matthew. He wasn't a naughty boy. He wasn't disruptive or snide or cruel. He was just . . . unlikeable.

Physically, he was stick-thin and uncoordinated. When he ran his limbs resembled a collection of slender twigs loosely bound together. He had no real friends, and as far as Tess could tell had made no particular efforts to acquire any. Breaks and lunchtimes he could most commonly be found in the library, cowering behind an open book, as if hiding from pursuers. He was the sort of child whose parents—of whom Tess had only ever met his nervous, bird-like mother—did him no favours whatsoever. Whereas the other boys carried rucksacks or sports bags, Matthew had been provided with a satchel of gleaming, conker-brown leather. Additionally, his shoes were too shiny, his trousers too short, and his old-fashioned crew cut gave him the look of a child actor in a wartime drama series.

For a while Tess had taken pity on the boy. She had put herself out, spent extra time with him, in an effort to prise him from his shell. Matthew, however, had remained not only unresponsive, but so sulky and ungrateful that in the end she had given up. She still felt a bit ashamed of abandoning the cause, but she consoled herself with the thought that at least she wasn't as downright hostile towards Matthew as some of her colleagues. The other teacher on this year eight field trip, Yvonne Harrison, who most of the kids loved for her friendliness and good humour, frequently referred to Matthew Bellings as "that snivelling little shit."

Turning now, Tess saw that Jason Hayes, his back to her, was hopping from foot to foot, waving his arm in the air. Her immediate thought was that Jason had snatched something of Matthew's and was taunting him, holding whatever-it-was out of reach. Then she saw Jason lunge forward, lowering his arm in a thrusting motion, which made Matthew squeal again. Some of the other children, especially the girls, squealed too, though there was laughter in their voices.

"Eew, you are so gross!" one of the girls (Tess thought it might be Francesca Parks) shrieked delightedly.

Muttering at the child behind her to halt, Tess strode towards the knot of pupils at the back of the queue. "What is going on here?"

Jason Hayes looked over his shoulder guiltily, and then flicked his arm, tossing away whatever he'd been holding. Because of the other kids milling around, Tess couldn't tell what it was, though she got the impression of something black and ragged sailing over the edge of the metal walkway and disappearing into the scrubby bushes below.

"Nothing, miss," Jason said innocently, turning to face her.

"Nothing," Tess repeated. "Do you honestly think I'm stupid, Jason?"

Jason was a sporty, thick-set boy with spiky hair. Often cheeky and excitable, but essentially a good kid.

"I'm very glad to hear it. So perhaps you'd like to tell me what you were doing to Matthew?"

Tess still couldn't see the smaller boy. It was as if the other children were purposely shielding him from view.

"Nothing, miss," Jason said again, and then added quickly, "I was just showing him something."

Tess sighed inwardly. She knew that to get to the heart of the onion you had to patiently peel away the layers one by one. "I see. And what were you showing him?"

"Just something I found, miss."

Tess stared at him silently for a moment, and then very deliberately said, "Do you want to go on the Mine Railway, Jason?"

"Because it's no skin off my nose to take you back to the coach. For all I care, you can sit there for the rest of the afternoon, writing an essay on how important it is to be a positive representative of the school. Would you like that?"

Francesca Parks, a precocious thirteen-year-old with a pierced navel, shrilled, "You can't do that, miss."

"You can't leave Jace on his own. It's against the law."

Mr. Jakes was the school coach driver. He was a scrawny man in his early sixties who always stank of cigarettes. He had a collapsed cavern of a mouth and bad teeth.

Francesca's eyes, still bearing the trace of the eyeliner she applied every afternoon the instant she stepped out of the school gates, widened. "You can't leave him with that old perv."

Tess stared at her unblinkingly. "I beg your pardon?"

Francesca's eyelids flickered and she bowed her head. "Sorry, miss," she mumbled.

"I don't want to hear another word from you, Francesca. Not one. Do you understand me?"

Tess paused just long enough to allow her words to sink in and then she focused on Jason again. "Now, Jason," she said, "I want you to tell me exactly what you were tormenting Matthew with and I want the truth. This is your one and only chance to explain. Don't blow it."

Jason braced himself. "It was a bird, miss."

He nodded. "I found a bird on the path back there, miss. A dead one. It was a bit manky."

Tess could guess what had happened. Jason had picked up the bird, waved it in Matthew's general direction, and Matthew, as ever, had over-reacted. It wasn't much more than boyish high jinks, but Matthew's response—and the fact that Jason must have known from experience exactly how his classmate would respond—meant that she couldn't be seen to condone his behaviour.

Curtly she said, "What did I tell you before getting on the coach today, Jason?"

"You told us we were representing the school and we had to be on our best behaviour, miss," he replied dutifully.

"Correct," said Tess. "And would you say you've adhered to those stipulations?"

"I appreciate the apology," Tess said, "but it's not me you should be apologising to."

The gaggle of Jason's classmates, who had been hovering in the background, now half-turned, shuffling aside to create an aisle. Revealed at the end of the aisle, crouching against the chain-link fence which enclosed the metal walkway leading to the mine entrance, was Matthew Bellings.