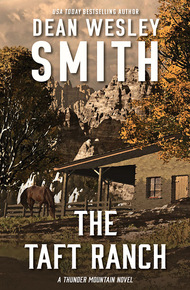 Duster Kendal knows something must be wrong when a tree blocks the road to the Taft Ranch. Turns out Lee Taft failed to return from his last trip into the past.

Duster fears the worst, that time kicked Lee into a distant and inhospitable future with no hope of return. And no hope of rescue.

A story of survival through centuries of time.

USA Today bestselling writer Dean Wesley Smith takes readers once again into his fan favorite Thunder Mountain time travel series, but this time into the distant future instead of the near past.

Bestselling writer Dean Wesley Smith (that's me) added The Taft Ranch, a stand-alone novel in his western/time travel Thunder Mountain series. I just didn't have enough of the western genre in this bundle, so couldn't pass it up. I have written around two hundred novels, comics, and more short stories than I can count and there are at least twelve stand alone novels in the Thunder Mountain western/time travel series. – Dean Wesley Smith

THE ROAD WAS blocked, but it shouldn't have been.

Duster Kendal climbed out of his white Cadillac SUV and stared at the narrow-tracked road that wound up a steep valley between rocks and pine trees.

A tree was down across the road now, and had clearly fallen at least a few weeks back.

No sign at all that anyone had tried to clear the tree or even parked in front of it and walked around it.

Lee Taft lived in a wonderful ranch up that road. When Lee got back from the past each time, he always came in here to work and be away from the world and get lost in his math, as he liked to say.

But now the road was blocked. Duster had driven that narrow road a hundred times and ridden on horse up it even more.

Lee, if he was here, would not have allowed that road to be blocked for more than a day.

The air around Duster was warm, even at eleven in the morning, and a light breeze brought him the scent of hot pine and sagebrush.

He stared around at the high rock-covered mountains that towered above the narrow valley, turning slowly to take it all in.

The road he had come into the area on was a single-lane dirt and gravel road which headed down a valley toward the two old Idaho mining towns of Big Creek and Edwardsburg, Idaho. He was still about twenty minutes from their locations.

Duster had stayed last night up at the Monumental Summit lodge, which looked close to this spot on a map, but it had still taken him almost two hours after a late breakfast to go down the mountain to the small town of Yellow Pine and then turn on the gravel Big Creek road to get to where he was now.

He knew he was in the right location.

This was Lee's road.

The Taft Ranch was in a wide area of the valley a mile up the narrow canyon. The ranch house itself Duster had helped build numbers of times back in 1890 and he loved the place.

Lee Taft, one of the best mathematicians to come along, and a good friend, built and lived at the ranch, both when he was back in history and in the present time.

And in all the times Lee was a regular at the Monumental Summit Lodge during the summer months. It was his absence from his regular visits to the Lodge this summer that had worried Dawn Edwards, another historian who worked and partially owned the lodge, and she had mentioned it to Duster who said he would go check on Lee.

Duster had figured Lee had gotten busy on some research and hadn't allowed himself time away from the ranch.

But the tree down meant that Lee was either sick up at the ranch or had never returned to the ranch for some reason.

Duster turned and went back to the car, taking out the satellite phone he kept in the car when in the Idaho central mountains. Regular cell service up here was just a laughing matter.

He called Dawn at the lodge. When she answered, he said, "There is a tree blocking the road going into Lee's ranch. He is either really sick or he clearly hasn't been here since he left to go into the past."

"It feels as if something has gone wrong, very wrong. I'm going to hike into the ranch house site and see if Lee is there. But first I want you to get a hold of Bonnie and also Brice and Dixie and Director Parks. I want all four of them to go together into the crystal cavern Lee was using to travel back into time. I'll wait here for what they find before heading up the valley toward Lee's place."

Dawn was silent for a moment, then said, "I'll be back with you quickly."

Duster closed the car door and turned on the air-conditioning. He had a horrid feeling about what they might find. But he didn't want to think about it until they actually went into the crystal room under the Institute in Boise.

It was those crystals that allowed them all to travel into other timelines and effectively the past.

He just sat staring down the road toward Edwardsburg for over ten minutes until his phone rang.

It was his wife, Bonnie.

She didn't even say hello.

"One of the machines was still hooked up to a crystal and had been now for at least a month. Maybe longer. The crystal record has Lee's name on it."

Travel into the past only took two minutes and fifteen seconds of present time. No exception. No crystal could be hooked up for longer than that time.

At least until now.

"When was it set for?" Duster asked.

It was exactly what Duster had feared when he saw the blocked road going into Lee's ranch.

"We unhooked the crystal," Bonnie said. "And marked it."

He took a deep breath and nodded to himself. Lee was no longer in that timeline.

"All four of you get ready to fly into the lodge for an early dinner tonight. I'm going to hike up to the location of Lee's home and see what I can see. I'll call you from there."

With that he climbed out of the SUV, put on his cowboy hat and long duster coat, and then with a bottle of water in each pocket and the satellite phone in another, he headed into the brush around the fallen tree and up the narrow canyon, following the old road he remembered.

His stomach twisted for the entire hike, worried about what he might find.

And he honestly had no idea what that might be.

And he had no idea what might have caused Lee to not return to the present in the normal two-minute time.

But he had a hunch.

And that hunch scared him more than he wanted to think about.