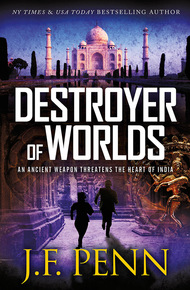 J.F.Penn is the Award-nominated, New York Times and USA Today bestselling author of the ARKANE action adventure thrillers, Mapwalker fantasy adventures, and the Brooke & Daniel psychological thrillers as well as other stories. Her books weave together ancient artifacts, relics of power, international locations and adventure with an edge of the supernatural. Joanna lives in Bath, England and enjoys a nice G&T.

Destroyer of Worlds by J.F. Penn

An ancient weapon threatens the heart of India.

A bomb explodes in the center of London and a fragment of an ancient Hindu sculpture is stolen from the ARKANE Headquarters by a secret organization bent on mass murder. If the sculpture is put together again, it will reveal the key to the Brahmastra, a weapon with the power of a nuclear explosion.

As those they love are threatened, ARKANE agents Morgan Sierra and Jake Timber must search for the pieces of the relic before it can be activated at the Kumbh Mela, the greatest pilgrimage on earth.

In a fast-paced adventure from the slums of Mumbai to the temples of Kolkata, the Taj Mahal in Agra to the killing fields of Rwanda, Morgan and Jake must find the pieces of the sculpture before it's too late.

New York Times and USA Today bestselling writer J.F. Penn changes gears for the bundle once again with Destroyer of Worlds. In this fast-paced thriller, an ancient weapon threatens the heart of India. There is no one better at writing fast-paced, edge-of-the-seat stories than J.F. Penn. And I promise that after you read this one, you will look for many more of her books. – Dean Wesley Smith

Tendrils of crimson dawn touched the Thames and turned the river to blood as it heralded a new day. The city was quiet, a magical place at this time when millions of people lay still in their beds. The ancient buildings rested before another crazy morning in the maelstrom that was London.

A ray of light caught the face of Big Ben as its hands ticked each second past, marking another cycle in the city. A block away, between Westminster and Soho, pigeons picked at the remnants of last night's revelry in Trafalgar Square, overlooked by the grand facade of the National Gallery. A black cab curved past St Martin-in-the-Fields church, heading towards the Mall and down towards Buckingham Palace. It swooshed through a puddle and muddy water sprayed up onto the pavement as it passed.

The air was chill, the night had not yet left. The square was still in shadow as a squeak of wheels pierced the air. A man in a high-visibility orange jacket pushed his rubbish cart between the fountains under the shadow of Nelson's Column. As he wheeled the cart through the square, he picked up litter with a slow stoop and glide: sandwich wrappings, a lost teddy bear, flyers for the next activist march, the discarded flotsam of the city. He had seen it all over the years since immigrating here, but the treasures people threw away still surprised him. Back in India, most of this would be reused and even sold on.

But he would never see his homeland again now.

Sweat beaded on the man's brow, dripping down into the deep lines around his eyes. He whispered a mantra, over and over, as he took those final steps, his lips forming and reforming the sacred words.

Security cameras, ever watchful, tracked his progress across the square. But his cart had a Westminster City Council logo on the side and he wore the uniform of a street cleaner, so he remained unseen. This was the city of many faces and his brown features were nothing special here in London, a place he called home. No matter now though – the gods called for blood and he had been chosen.

He inhaled the cool air and looked up at the bronze lions guarding Nelson's Column, their regal faces composed as they stared back. A skeletal horse stood high above him on the Fourth Plinth of the square, the modern sculpture on this spot changing over time to reflect the shifting city allegiances. A jaunty bow tied around the horse's front leg displayed the electric lights of the stock exchange ticker tape that ran around it. Its sparse rib cage reminded the man of home, the dried bones that washed up on the shore after floods. At least his family would never go hungry again after this.

He wheeled his cart closer to one of the fountains and looked at his watch.

The man bent and put his hands into the water. The coolness on his skin calmed his mind and he splashed some on his face as he whispered a final prayer. He looked up to the sky to see the last stars of night fading into the dawn and smiled. It was still a beautiful world. Perhaps in his next life, he would return to this great city in a different guise.

The man turned back to his cart, lifted the lid of the bin, reached in and pressed a button. There was a moment of stillness, when a shimmer seemed to hang in the air.

Then, the light exploded.

The bomb blast echoed around Westminster, the impact immediately destroying both fountains and blasting a hole in Trafalgar Square. The giant marble column topped with Nelson's statue shattered. The proud bronze lions melted in the blast and the memorial plaques made from enemy cannon tumbled into the crater.

As the echo from the blast died, the shrill sound of sirens broke the air. Alarm bells went off in every building in central London as Buckingham Palace and the Houses of Parliament went into lockdown.

Above the sound of panic, the chop chop chop of a helicopter drew closer. It flew from the south, low along the Thames, emerging over the central city like a wraith. It was black with no markings, and those who saw it thought it was a military response to the bomb.

Seconds after the blast, it hovered over Trafalgar Square, directly above the crater. Dust from the blast swirled about it like fog, cloaking it from the cameras. The side doors opened and three men rappelled down thick ropes that snaked into the hole beneath them.

The bomb had laid open hidden levels beneath Trafalgar Square. These levels were not on any official maps, and few were aware of them. They had never been breached.

Inside the crater, the men unhooked themselves from their lines, turned head-torches on, and quickly made their way through the smoking rubble to the door of a vault. It was made of thick metal, overlaid with ancient wood and inscribed with occult patterns. It was also criss-crossed with modern steel bars and protected by a high-level electronic security system.

But the lights on the door were flashing orange, blinking from the blast damage.

One of the men attached a magnetic device to the vault control panel. He pressed a key on the pad, his foot tapping as they waited. It wouldn't be long before the scene crawled with military and police. They had to get out of here quickly.

For a moment the men stood at the entrance, their hesitation betraying a moment's doubt about their mission.

Then the leader stepped inside.

He pulled a Geiger counter from his bag and walked into the vault. It stretched into the distance with separate opaque rooms for books, religious artifacts and unknown objects hidden inside, a cornucopia of hidden knowledge.

But they were only here for one thing.

The device beeped and the man turned towards one of the rooms.

The other two men rammed the door with a short metal post, the grating thump echoing through the vault. Once, twice, and then the door crumpled, shuddering on its hinges as they pushed it open.

The leader stepped inside, the light from his head-torch piercing the gloom.

There was a box on a low shelf painted with scenes from the Mahabharata, one of the great Sanskrit epics of ancient India. The man smiled with relief. He picked it up and placed it in his bag.

Together, the men ran from the vault, clipped themselves back onto the lines and were hauled up into the helicopter. They flew off over the city, leaving destruction in their wake.