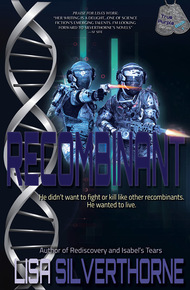 Genetically recycled soldiers, called recombinants, fight a deep space war for the United Countries of Earth, desperately fighting to hold the front line and protect a planet they've never even seen. Their survival mechanism is a memory replacement chip that parses out the horrors of war—and anything else that hinders their ability to fight. But something has gone wrong and the front line is pushing closer to home system.

Struggling against her own parsed memory, Dr. Jeanette Kingston discovers a malfunction in the recombinants' memory chips and sets out to identify and resolve the problem. But she has a fight on her hands. No one wants to acknowledge the potentially catastrophic problem, much less resolve it. As she gathers evidence, she encounters Pvt. Peter Mitchell, a young recombinant marred by sensitivity and a strong will to live a life beyond the battlefield.

Ultimately, Dr. Kingston wrestles with her conscience when her superiors decide the only solution is to destroy all the flawed recombinants, including Pvt. Mitchell. Forced to identify the soldiers with the affected chips, Dr. Kingston must decide between a life worth saving and the fate of her home world.

Lisa Silverthorne also gives us an exclusive novel to this bundle. In Recombinant, she takes us into deep space where a force of Recombinants fights to save Earth. Lisa is a master of many forms of fiction in her novels and short stories, and everything she writes has heart. This exclusive novel, the first of a series, is no exception. – Dean Wesley Smith

Drake's grid alarm grew louder, more intense. Fear swelled inside Peter, rising bitterly in his throat as he rushed ahead, the snow blinding, and tried to follow the pulsing whine of Drake's grid. As the sound grew louder, Peter ran faster. Trees raked across his arms and face, nearly knocking him into the snow. He weaved down the path, his concentration narrowed on the sound of Drake's grid.

He slipped, plunging headlong into a snow bank, but he scrambled to his feet and kept running. Rounding a curve in the trail, he stumbled again and fell.

Lying half-buried in the snow was Drake's sensor grid. He glanced around for Drake. No sign. Peter recoiled for a moment, his body shaking, but forced himself to retrieve the grid.

"Drake!" He scanned the horizon, rifle raised to his shoulder. "Drake!"

Only the whisper of falling snow and the staccato beat of Drake's sensor grid filled Peter's ears. He gazed at the grid. A bow echo, three of them. Antarans rushing toward him and Sting.

Frantic, Peter dashed down the path toward Sting.

He found Sting crouched in the snow, rifle pointing northwest. Sting's face was contorted, anger in his eyes and tightening his jaw line. The corners of his mouth quivered, a bit of fear creeping into Sting's expression as the grid alarm grew louder. Peter fell down beside him and thrust Drake's grid in his face.

"Sting, they've swerved. From the north. Look! The signature says it."

Peter raised his rifle, his heart pounding, and pointed it north.

The wail of the alarm was unbearable.

Peter glanced left and then ahead at the trees. He sniffed the air. Sugary sweetness scrubbed past his face as the wind sliced through him.

He turned his body into the wind. He didn't care what the grid showed. They were coming due west.

"Pete, what are you doing? Help me watch."

"What happened? Where are they?"

Peter shrugged, but a feeling of dread pressed against his shoulders. The hair on his neck stood on end.

He gazed up at the trees again. There. They'd come from there.

In a blur of grey, something leaped out of a tree and rolled west toward them in the snow.