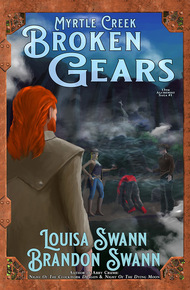 Myrtle Creek just wants to be left alone to work his metal in the quiet environs of Old San Fran, repairing folk's mechanicals during the day; working his forge—along with a bit of magic—at night.

Then a new mayor takes office and things go awry. Statues appear in odd places and townsfolk go missing. The metal statues automatically make Myrtle a suspect. All too soon, he finds himself embroiled in a quest to uncover the town's deepest secret. Deciphering the mystery reveals a plot that could destroy the whole world.

And like it or not, he's the only one who can save it.

Louisa Swann, writing with her son, Brandon Swann, gives us an exclusive novel, Broken Gears. A fantastic character blends magic and metal working to solve a town's deepest secret and stop a plot that could destroy the entire world. Combination of mystery and magic and fast-paced action. Can't ask for much more in one book. And you can only get it here. – Dean Wesley Smith

The way Myrtle Creek saw it there were only three things in life worth dying for—hot coffee, molten metal, and sizzling women. Especially when you lived in a town called Old San Francisco with a burgeoning population of two thousand—if you counted the sheep Old Man Richards kept in his barn.

According to the city fathers the town's name kept them connected to the rest of the civilized world, though he had yet to see how changing the name from Franny's Crossing to Old S.F. was gonna keep this town from fading into the mountains surrounding it.

Myrtle carefully set the tiny pair of metallic wings he'd just finished polishing on his workbench, leaned back on his stool, and admired the way the light from a nearby lamp caught the burnished metal. He studied the wings with a critical eye, still not certain he was satisfied with the titanium-aluminum alloy with a few other trace elements thrown in, including a dash of ruby dust and bloodstone that gave the metal its deep red color.

He'd taken his time with these little beauties, hand-forging the titanium-aluminum alloy to strengthen the metal before shaping it and infusing the metal with the most basic of magics.

Something bumped his leg and Myrtle scowled down at the enormous cat standing next to him. "What's on yer mind, laddie?"

The cat tilted its head toward the window, then sneezed, the dark red fur covering it from head to toe quivering. :Company's coming.:

Myrtle sighed. He still couldn't get used to the extra voice in his head, but it was how Big Red communicated.

No one knew what kind of cat Big Red actually was. Myrtle had rescued Red from a bear while in the process of rescuing a toddler from Big Red's mother. The mother had been the size of a cougar. Red was following in his mother's 'pawsteps,' as far as size went. He was a little over a year old now—larger and more deadly than a bobcat—and his back already came to Myrtle's knee.

As if confirming the cat's claim that company was coming, a buggy rolled by on the road outside, horses snorting and wheels rattling.

"More than likely one of the Jeffries boys on his way back to the farm," Myrtle said. Though it seemed a bit late for Jeffries. Less'n it was Friday and the boy'd dawdled about in town, waiting for the weekly mail.

"It be Friday?" He slapped the workbench so hard his palm stung. Tess was due back on Friday. So was Chloe. He hadn't heard from either of them. "Dinnae be telling me it's Friday."

Friday or not, the sound reminded Myrtle the day was getting long in the tooth. Time to wrap things up. Call it a day.

Myrtle scowled at the late afternoon light coming through the tall window in the north wall. The low light silhouetted the grandfather clock sitting right next to it, neatly repaired and ready to return to Mrs. Barley as soon as Tess got back. The clock's rhythmic tick, tick, tick was reassuring. The infernal contraption had fought him tooth and nail, or rather, gear and pulley. It'd taken all his patience and a sharp rap on the moon dial to get the thing working again.

He wiped a nonexistent spot from the wings, then worked the kinks out of his neck, ignoring the knot in his stomach. He'd done what he could with this newest creation.

The next part—the most crucial part of this whole experiment—depended on his new partner.

'Course, it wouldn't hurt Myrtle's feelings the teeniest little bit if Lady Luck decided she was on his side. Just this once.

He tossed the polishing cloth over the wings with an exasperated sigh. He could worry about all the ifs, whys, and hows from here 'til tomorrow, but all the pondering in the world wouldn't change the fact that his new partner hadn't shown up yet. Sitting around moping only made the knot in his stomach worse.

Time to hang up his apron and head into town.