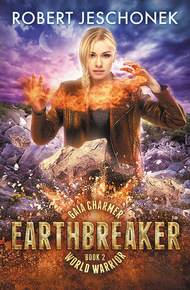 As Mother Earth in human form, Gaia Charmer has all the power of the world behind her. But will even that be enough for this sexy, gutsy private eye to solve the mystery of her missing Landkind friends? The case throws Gaia in the crosshairs of a deadly project to turn Landkind—humans with the powers of the Earth's landforms—into walking weapons of war. At the same time, she must face the most personal crime ever, a murder committed by someone claiming to be Gaia herself. Even with her team of powerful allies, can Gaia fight her way through these trials that threaten the very existence of the planet whose soul she embodies?

Robert Jeschonek is the bestselling author of more books, comics, and short stories than he can count. One reviewer called him "the love child of Tim Burton and Neil Gaiman." Yup, I agree with that completely. In this novel, Earthbreaker, Robert takes us back to his bestselling series where Gaia Charmer has the power of the entire Earth at her fingertips. And wow, does she use it. – Dean Wesley Smith

You might not believe this, but I was running away. It was pouring down rain, I was soaked to the skin, and the woman chasing me through the night was cranking off shots with a semi-automatic assault rifle.

Because, in case you didn't know, Gaia Charmer is Mother Earth in human form. For real.

Not that Crystal Ruby Hayes, the numbnuts with the rifle, knew all that. All she knew was that some petite blonde in her twenties with a pleated braid slung over one shoulder had just torn up the road in front of her SUV and taken off with the bundle that Crystal had stolen days ago from a rest stop along the Pennsylvania Turnpike.

A bundle that needed its diaper changed immediately.

It was true. Even as Crystal fired round after round, I deflected them with a shower of rocks cast up from the ground behind me. Earth avatar that I am, I could sense every bullet's approach and fling up any part of the ground to make it ricochet harmlessly away. Not a single shell came anywhere near brushing my brown leather jacket.

But baby Mary Lou Robbins still wasn't in the clear, which was why I was running. Sprinting into the woods off the side of the road, I turned a portion of my senses forward, searching for the perfect deposit of local granite. It wasn't far, and I picked up my pace, even as Crystal kept shooting and running faster in my wake, gaining on me.

I reached out with my mind, drawing on the vast well of power within me. The granite responded, wrenching itself from under the surface to hang in the air ahead of us.

The baby shrieked in my arms as I ran even faster, calling the granite to me. The chunks and slabs swam up and swirled around me, shaping themselves into a protective shell.

When they were done, Mary Lou and I were encased in rubble, the only opening a narrow slit at eye level.

Bullets peppered our stone armor, pinging and zinging in all directions. Nothing could penetrate that granite hide, though.

"What the hell is that?" snapped Crystal, continuing to shoot. "Get outta there!"

My answer was to extend my mind beyond the shell, scoop up a pile of mud, and heave it at Crystal. She howled with rage as the mud splattered all over her, knocking her back a step and stopping the gunfire at least for a moment.

It was enough time for me to gather more mud and rocks and fling them at Crystal in another barrage. She fought to keep her feet and advanced through sheer force of will, bucking the tide of mud and stone.

Lightning flared and thunder boomed as I put the stone suit in motion. The legs of fused rubble bent at my command, marching me toward Crystal even as I pelted her with the hardest pebbles and shards of rock I could find.

"Give me the baby!" she shouted, cranking off a few last rounds as the storm of earth became too much for her. "She's mine!"

Not a chance. Lightning flashed as I hurled the biggest mass yet of stone and soil, this time blowing the rifle from Crystal's grip and driving her to her knees.

Stomping over, I pulled back one powerful arm of the stone suit and lashed out, splaying Crystal unconscious in the mud. Her still form was blasted by the rain, illuminated by the flickering glow of lightning.

Soon enough, red and blue lights flashed over her, too, coming from the direction of the road beyond the woods. I knew it meant a police cruiser had arrived, and I smiled.

My partner was about to join us.