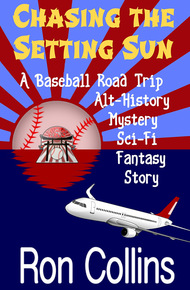 They've already changed the face of baseball in Japan, and are threatening to engulf the sport across the world. Six seasons have passed since Casey Neal and his friend Don-o saved the game in the United States. Now Don-o is gone, and Casey is a baseball reporter who is trying once again to find himself while immersed in a culture he doesn't understand.

Hee teams up with fellow baseball fans in Japan's chief inspector Yuni Ichihara, and Diaki Matsui (a metal worker from Tokyo's industrial complex). Together they deal with such strangeness as international organized crime rings, Yōkai spirits, quantum physics, and ... well ... pickled everything.

This time the stakes are global.

Can Casey's team manage to save baseball once again?

Since it has been my desire to really mix-up the different ways to save the world for this bundle, bestselling writer Ron Collins helped me a lot. In Chasing the Setting Sun, he calls the novel "A baseball road trip, alt-history, mystery, sci-fi, fantasy story." And only someone with the writing and storytelling skills of Ron Collins can pull off a book like that, and he does. Wonderfully. Get the bundle just for this wild book. You won't be sorry. – Dean Wesley Smith

So I get off the plane in Tokyo, and the first thing I know, I'm lost. Tokyo's Haneda International airport looks like most big airports, only bigger. It's a cavern of glass and steel. Sound echoes through it nonstop. The terminals are rounded domes with towering white ceilings that make you feel like you're in some weird, antiseptic modern ballpark. It takes me a half hour to find the luggage carousel, and by the time I get there my bag is one of only four still going around.

I'm sure the vodka isn't helping any.

I take a cab, and it turns out the guy speaks the exact same amount of English as I do Japanese. I point at a picture of my hotel, and the guy nods and yeah-yeah's me, but fifteen minutes later I'm pretty sure he's going to the wrong place.

Tokyo's a big-assed city, a New York kinda place. It's busy, full of movement and lights, full of trains packed with salarymen, and made up of rivers of people who flow over streets that are clean enough to make you wonder if you're in some kind of staged movie. Crossings at street corners are like a mash-up of the running of the bulls and a National Geographic documentary on the spawning of salmon—everyone goes upstream the entire way, jets vs. sharks vs. moray eels vs. little cars vs. squealing bicycles vs. stealthy scooters that swoosh by in their electric way.

And it's a loud place.

Music plays, and ads blare, and lights flash from 3D digitals in this dizzying crescendo that leaves me blinking away big orange and purple after-images. It seems there's a blaring Pachinko at least every hundred meters—a Pachinko being a pulsing room full of slot machines and strange games that emit a sound I can only describe as being like a Vegas casino on acid and amplified about a hundred freaking times.

Cabbies use their horns as their primary method of communication and my guy is playing lead baritone. I wave the brochure at the driver again, and he waves back. Finally, I get on the phone and call my Japanese agent, a man named Pak Ci, and who is Korean rather than Japanese. Pak talks to the driver, and ten minutes later I arrive at the hotel.

So that's how I get to the place I'm at right now, a tiny room on the 24th floor looking out over Tokyo as the nighttime steals over it. I'm dead tired, and sipping complimentary sake from a plastic cup. Behind me the room is dark except for the television screen that's playing one of those strange sadomasochistic game shows the Japanese seem to die for.

Everything starts for me tomorrow.