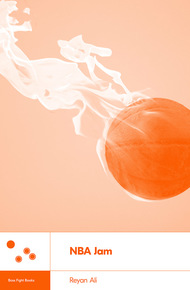 Reyan Ali is a writer from Columbus, Ohio. His work has been published by Wired, Spin, The Atlantic, The A.V. Club, and alt-weekly papers across the country. Born in Dallas, he grew up in Karachi, Pakistan, where he devoured '90s NBA action almost exclusively through trading cards, Beckett Basketball magazine, and NBA Jam: Tournament Edition on the Sega Mega Drive II.

When NBA Jam dunked its way into arcades in 1993, players discovered just how fun basketball can be when freed from rules, refs, and gravity itself. But just a few years after the billion-dollar hit conquered the world, developer Midway, publisher Acclaim, and video arcades themselves fell off the map. How did a simple two-on-two basketball game become MVP of the arcade, and how did this champ lose its title?

Journalist Reyan Ali dives deep into the saga, tracking the people and decisions that shaped the series. You'll get to know mischievous Jam architect Mark Turmell, go inside Midway's Chicago office where hungry young talent tapped into cutting-edge tech, and explore the sequels, spin-offs, and tributes that came in the game's wake.

Built out of exhaustive research and original interviews with a star-studded cast —including Turmell and his original development team, iconic commentator Tim Kitzrow, businessmen and developers at Midway and Acclaim alike, secret characters George Clinton and DJ Jazzy Jeff, Doom co-creator John Romero, and 1990s NBA demigods Glen Rice and Shaq—Ali's NBA Jam returns you to an era when coin-op was king.

I've been waiting to read the story of how NBA Jam was made since the first time I dunked with Mark Price (and if you follow the Cleveland Cavaliers, you know the unlikelihood of that ever happening outside a video game). Ali and Boss Fight Books do not disappoint, going in-depth to discuss the game's creation and impact on pop culture. – David L. Craddock

On its surface, NBA Jam was a small game. You moved back and forth on a tight playfield, always playing the same kind of game on the same court for the same crowd. There was nothing to customize, no supplemental modes or bonus features of any sort. Four players. One ball. That's it.

But as soon as gamers started digging, NBA Jam, NBA Jam: Tournament Edition, and the two games' many console adaptations revealed much, much more. Over the 1990s, NBA Jam's lore grew to be filled with strange codes and peculiar stories, imbuing it with the same mystique the Mortal Kombat games had. No matter how far-fetched a rumor about NBA Jam was, it felt like there was a chance it was true. This aura went a long way in keeping the game on players' minds as new games arose to compete for Jam's attention. In the case of the game's most famous hidden element — its secret characters — the whole thing started as a joke.

After wrapping up the game and admiring how well NBA Jam had turned out, someone on the development team suggested that they all get their faces digitized for the game. With the face-swapping system, substituting heads was easy to do, so why not put themselves in the game? It would make a fun little memento. One by one, each of the seven went up against the blue screen to have his image captured.

When it was Sal DiVita's turn in front of the blue screen, he stood stoically.

"All right, smile if you want," a voice behind the camera said.

"Not even for the selection thing?" the cameraman said.

DiVita stayed silent. Locking in his most intimidating game face, he slowly rotated against the screen. He turned 360 degrees, allowing the camera to get a complete view of his features, including his long black mullet — the kind of haircut popular among the pro wrestlers of the era. Capturing DiVita took 10 seconds. Then, it was on to the next developer.

Jon Hey stuck out his tongue. John Carlton dangled a cigarette out of his mouth. Shawn Liptak widened his eyes and jumped around. One by one, each of them stepped in front of the camera.

The developers buried themselves in NBA Jam through codes corresponding to their initials and birthdays that could be entered at the start of a game. DiVita was SAL, February 1; Hey was JWH, September 20; Carlton was JMC, August 5; and so on. They quickly added their friends at Midway, and the blue screen actors, too. Everyone's heights and abilities were blown out of proportion, but hey, this was their game.

To the team's surprise, this in-joke proved to be of immense interest. Players everywhere compared notes about these unfamiliar characters and their skill sets. Lists of codes containing secret characters were taped to the sides of cabinets, and guides like "How to WIN at NBA JAM!" traveled far and wide outside Kentucky. One Midway distribution partner sent management an irate letter about the codes because of the frenzy they were causing. "Your programmers have created a monster," Lieberman Music Company president Stephen E. Lieberman wrote, attaching an FAQ, which was being sold to players in a Minneapolis arcade for $10 to $25 a copy. "I think that programmer creative freedom has gone too far."

Yet as NBA Jam's earnings started to fade, rumors and codes were crucial to boosting them up. "[Jam designer Mark] Turmell and those guys were masters at spoon-feeding information to the press and the public at regular intervals," VideoGames & Computer Entertainment editor Chris Bieniek said to me. "Eventually, they realized that it was actually easier — and even more effective, in the long term — to just straight-up lie about secret stuff because people would still keep trying different button combinations and guessing at the supposed hidden characters' initials and birthdates, hoping to be the first to discover a new secret." One kid tracked down Turmell's home number and called and spoke to his wife, pretending to give a survey, just so he could get her initials and birthday to check if she was in NBA Jam. (She wasn't.)

Cheerleader codes became the most buzzed-about subject among NBA Jam fans. The cover of the August '93 issue of VG&CE boasted a screenshot of a digitized Kerri Hoskins coming in for a monster jam, implying that she (and, by proxy, Lorraine Olivia) had to be in the game somewhere. Players did everything they could to find them, testing combination after combination. The discussion began on message boards then led to players hunting down Playboy back issues for her initials and birthday. Some resourceful boys called Playboy directly, hoping to speak to the ladies themselves. As it so happened, the original screenshot was just a mock-up so VG&CE would have something cool for the cover, and the cheerleaders were never actually playable characters. When Tournament Edition came out, Hoskins and Olivia finally made it into the game, but not without Turmell hinting that they had been hidden in NBA Jam the entire time.